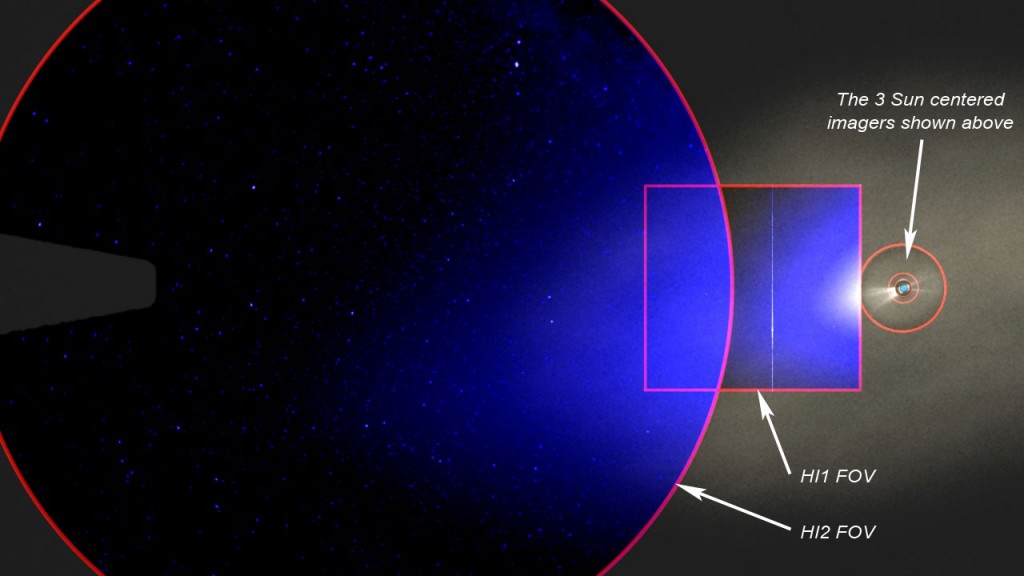 Earth’s orbit is on the left and the Sun is on the right . Here you can se the field of view of three sun centered imagers and the two Heliocentric Imagers. This image shows fields of view of the Ahead spacecraft. The Behind spacecraft observes the area between the Sun and Earth from the other direction, so that between them we see 180 degrees of sky. (Credit: STEREO/GSFC)

The STEREO Behind spacecraft has now moved far enough in its orbit for Earth to enter the HI1-B field-of-view. Earth will be soon visible in STEREO Ahead’s HI1 and in the coronographs.

December 22, 2012 – Earth is the object at the center right edge. The bright object near the upper-right corner is the bright star Procyon. Soon Earth will be visible in STEREO Ahead’s HI1 and eventually in the coronagraphs. (Credit: STEREO/GSFC)

Position of two STEREO spacecrafts now, on December 22, 2012 and at the time they would be behind sun on September 1, 2012 (Credit: STEREO/GsfC)

After the two STEREO spacecraft pass behind the Sun, they’ll essentially be “upside-down” from their normal orientation. This is done to keep the high gain antenna pointed towards Earth. At the same time, the SECCHI Heliospheric Imager cameras will remain pointed at the region between the Earth and the Sun.

Each STEREO spacecraft carry five imaging instruments and they are known as STEREO’s SECCHI imaging suite. SECCHI can image all the way from the Sun to the orbit of Earth.

There are three sun centered imagers: EUVI (extreme UV light out to 1.7 times the Sun’s radius), Cor1 (visible light coronagraph which observes from 1.5 to 4 solar radii) and Cor2  (visible light coronagraph which observes out to 15 solar radii) and there are two Heliocentric Imagers (HI), visible light imagers which are pointed away from the Sun: HI1 (observes visible light from the outer part of Cor2’s field of view to about a third of the distance to Earth’s orbit) and HI2 (completes the Sun-Earth view by extending the view to Earth’s orbit).