As of November 17, NASA’s STEREO-A spacecraft (Solar and Terrestrial Relations Observatory Ahead), has once again resumed its science operations and began transmitting data at its full rate. For the previous year, STEREO-A was transmitting only a weak signal, or occasionally none at all, due to its position almost directly behind the Sun.

Data obtained by STEREO is used by scientists around the world to monitor solar events. Its science operations include transmission of lower-resolution real-time data as well as high-definition, but delayed, images of the Sun’s surface and atmosphere. 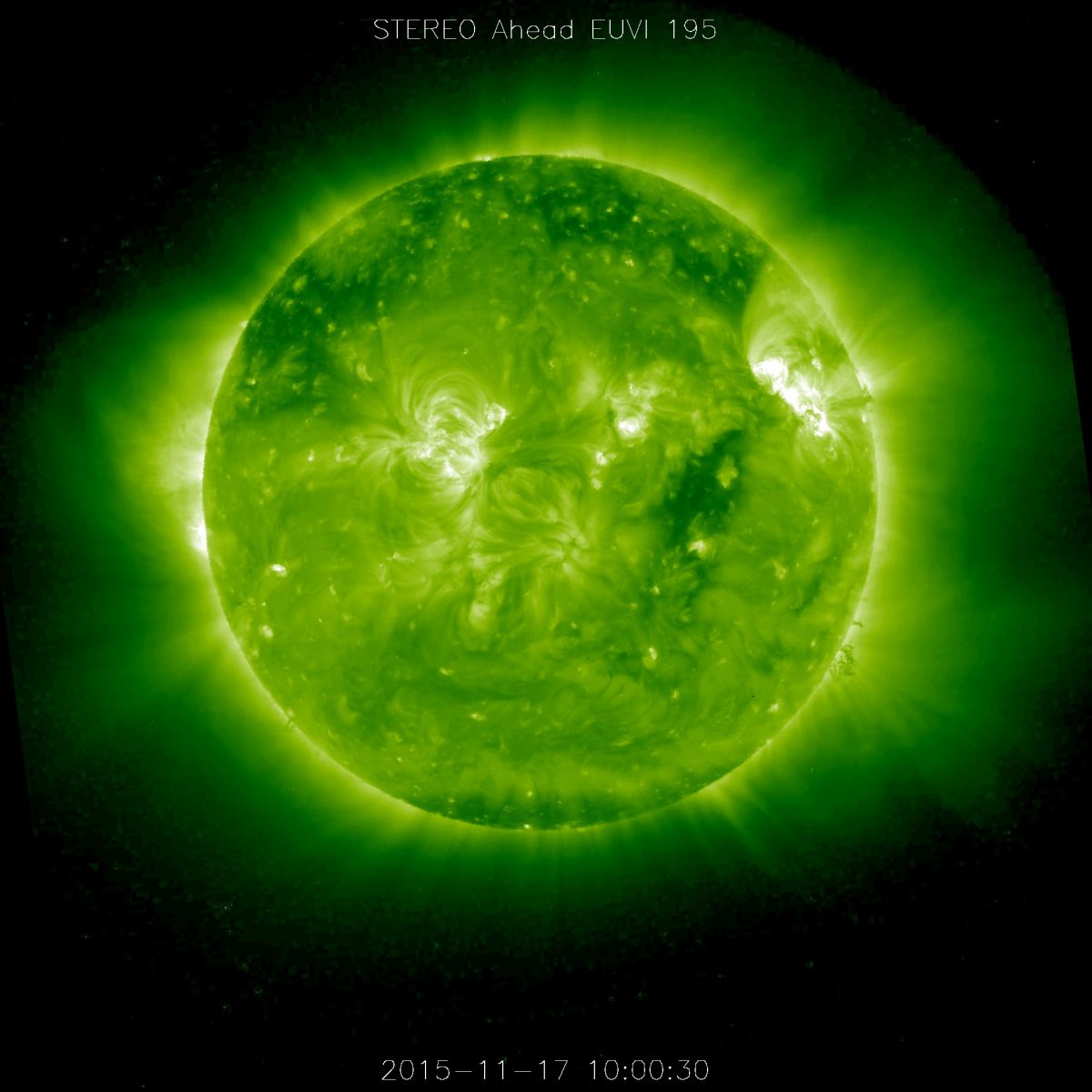 An image of the sun taken with the Extreme Ultraviolet Imager aboard STEREO-A, which collects images in several wavelengths of light that are invisible to the human eye. This image shows the sun in wavelengths of 195 angstroms, which are typically colorized in green. Image credit: NASA/STEREO

One of the key components of the real-time data, known as beacon data, is what's called coronagraph imagery – in which the bright light of the Sun is blocked out in order to better see the Sun's faint atmosphere. Coronagraphs are key for monitoring when the Sun erupts with a coronal mass ejection.

“STEREO-A’s real-time data is key for scientists to make accurate models of interplanetary space weather,” said Yari Collado-Vega, a space scientist at NASA’s Goddard Space Flight Center. “Having a second set of coronagraph images, in addition to those from the Solar and Heliospheric Observatory (SOHO), means we can measure coronal mass ejections much more accurately.”

For the past year, however, beacon data was only received for a few hours each day, if at all, limiting scientists’ ability to monitor the Sun. Since August 2014, our line of communication to the spacecraft was so close to the Sun that pointing the antenna straight at Earth also meant pointing it nearly directly at the Sun, which would cause the spacecraft’s antenna to dangerously overheat. Now that STEREO-A has emerged from behind the Sun, scientists have once again pointed the main lobe of STEREO-A’s antenna towards Earth and the stronger signal means that the majority of the beacon data can once again be picked up.

STEREO-A is also using this stronger signal to send high-definition views of the Sun’s far side with a two- to three-day delay. These detailed images of the Sun’s surface and atmosphere allow scientists to better track the formation of solar events.

STEREO-A’s twin spacecraft, STEREO-B (Solar and Terrestrial Relations Observatory Behind), has been out of communication since October 2014, when communications were lost following a planned reset of the spacecraft.

For several months, STEREO-B’s orbit took it behind the Sun from our perspective, making it impossible to send messages to the spacecraft. But STEREO-B will soon emerge from the Sun’s interference zone, and spacecraft operators will resume their attempts to contact the spacecraft on November 30.