On July 11, 2015 we received our first images in over three months from NASA's Solar TErrestrial RElations Observatory Ahead spacecraft, or STEREO-A. Since March 24, 2015, STEREO-A has been on the far side of the sun, where it has had to operate in safe mode, collecting and saving data from its radio instrument.

The three-month safe mode period was necessary because of the geometry between Earth, the sun, and STEREO-A. STEREO-A orbits the sun as Earth does, but in a slightly smaller and faster orbit. The orbit ensured that over the course of years, Earth and the spacecraft got out of sync, with STEREO-A ending up on the other side of the sun from Earth, where it could show us views of our star that we couldn’t see from home.

Though the sun only physically blocked STEREO-A from Earth’s line of sight for a few days, STEREO-A was close enough to the sun – from our perspective – that from March 24 until July 8, the sun interfered with STEREO-A’s data transmission signal, making it impossible to interpret.

As STEREO-A kept orbiting, it eventually made its way far enough from the sun to come out of this transmission dark zone. In late June, the STEREO-A team began receiving status updates from the spacecraft, confirming that it had made it through its long safe-mode journey unharmed.

While it was in safe mode, STEREO-A’s radio wave instrument collected and stored data almost continuously for four months. On July 9, the STEREO team began turning on solar wind and particle instruments, and over the weekend they powered up the imaging instrument. 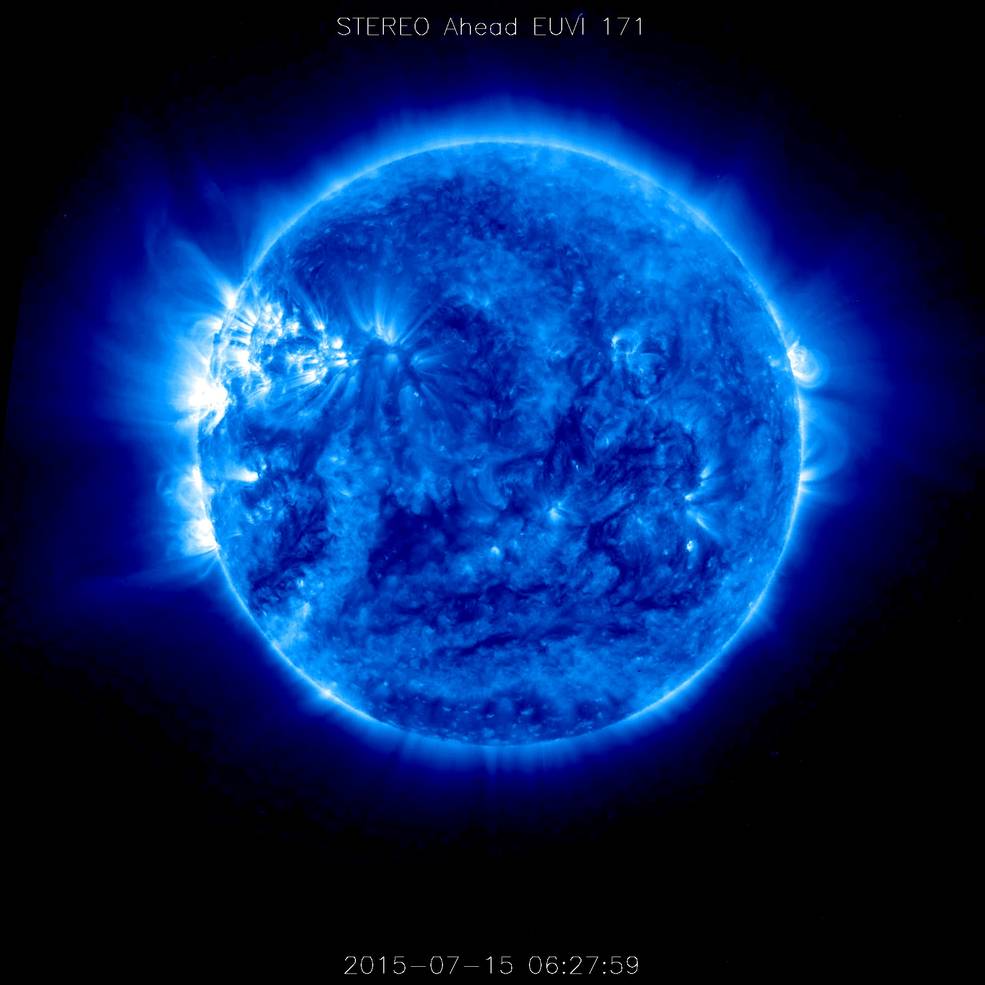 An image of the sun taken with the Extreme Ultraviolet Imager onboard STEREO-A, which collects images in several wavelengths of light that are invisible to the human eye. This image shows the sun in wavelengths of 171 angstroms, which are typically colorized in blue. Credit: NASA/STEREO.

The image above is from the Extreme Ultraviolet Imager, which collects images in several wavelengths of light that are invisible to the human eye. The imaging instrument suite also has two coronagraphs and a heliospheric imager, which are useful for tracking the speed and shape of the giant clouds of gas expelled by the sun called coronal mass ejections, or CMEs. By triangulating the views from STEREO and solar observatories closer to Earth such as the joint ESA and NASA Solar and Heliospheric Observatory, scientists can create a full 3-dimensional model of these CMEs.

STEREO is the third mission in NASA's Solar Terrestrial Probes program (STP). The mission, launched in October 2006, has provided a unique and revolutionary view of the sun-Earth system. The two nearly identical observatories – one ahead of Earth in its orbit, the other trailing behind – have traced the flow of energy and matter from the sun to Earth.