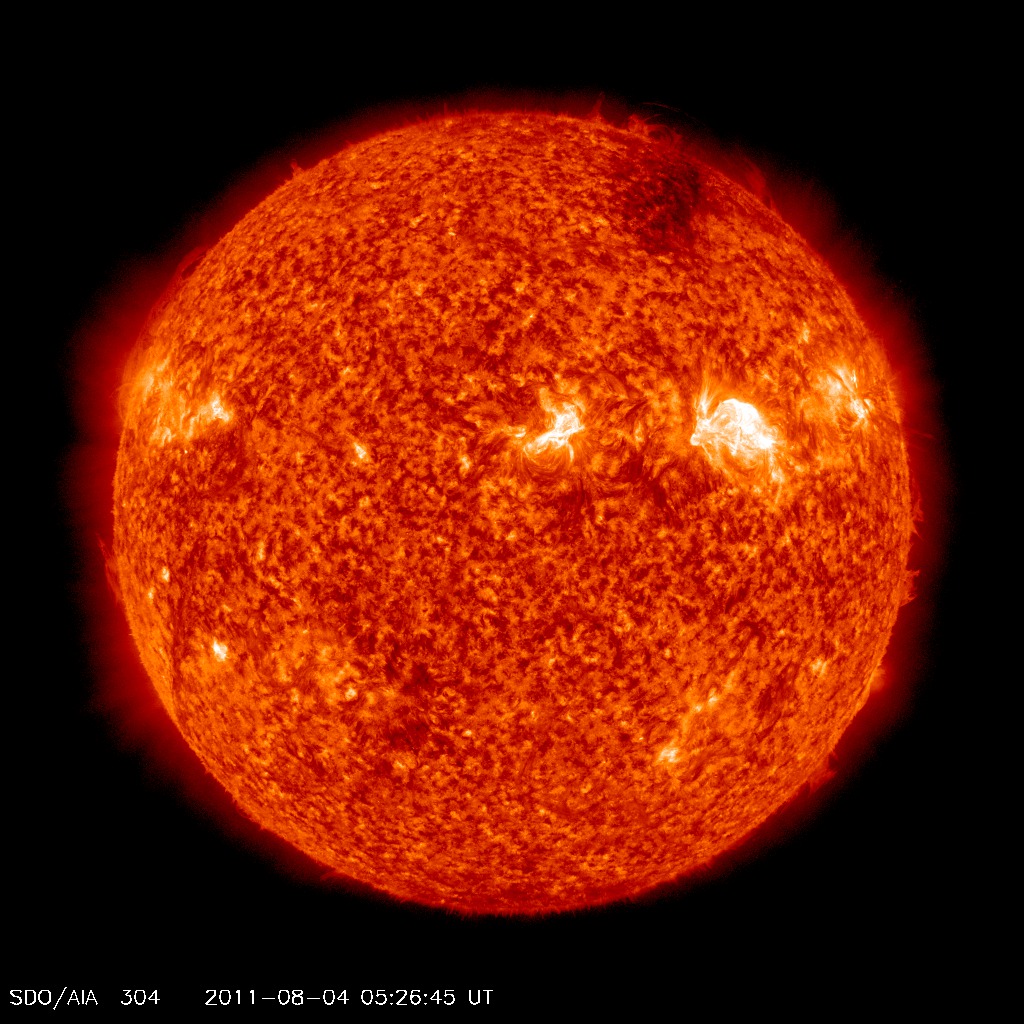 Sunspot 1261 is at it again, this time producing a strong M9.3 Solar Flare at 03:57 UTC Thursday morning. It also turns out that yet another Coronal Mass Ejection (CME) was produced and you can see it in the still image below captured by STEREO Ahead.

Proton Levels are on the increase. (SolarHam)

For the third day in a row, active sunspot 1261 has unleashed a strong M-class solar flare. The latest blast at 03:57 UTC on August 4th registered M9.3 on the Richter Scale of Flares, almost crossing the threshold into X-territory (X-flares are the most powerful kind). 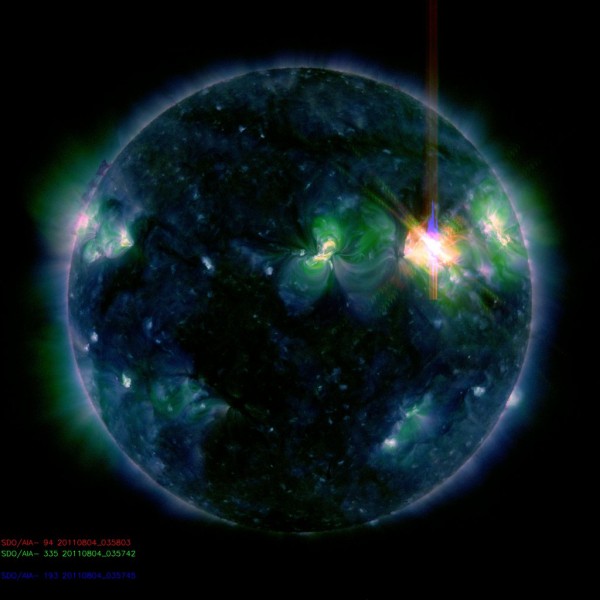 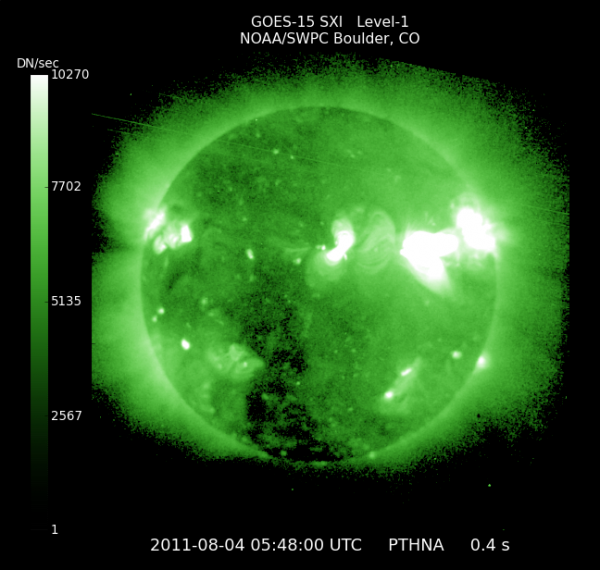 Yesterday's M1-class eruption from sunspot 1261 was observed by three spacecraft: SOHO, STEREO-A and STEREO-B. Using data from those three points of view, analysts at the GSFC Space Weather Lab have made a 3-dimensional model of the CME now en route to Earth. Click on the image to launch a computer-generated movie of the expanding cloud: 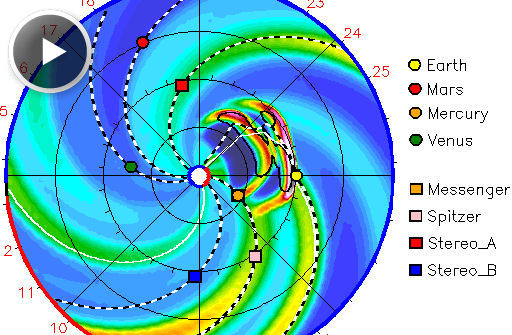 According to the model, Earth's magnetic field will receive a double-strike from the clouds on August 4th at 22:39 UT plus minus 7 hours. Mild to moderate geomagnetic storms are possible when the CMEs arrive.

During the recent years of deep solar minimum, observers of the sunset grew accustomed to a blank solar disk. News flash: The sunspots are back. "The sunset conditions of August 2nd were just right to show the massive sunspots AR1260, AR1261 and AR1263 to the casual observer who happened to glance at the sun for a brief few moments," reports Stephen W. Ramsden of Atlanta, Georgia. "You could even see the penumbra with the naked eye!" He had a camera handy and snapped this picture: 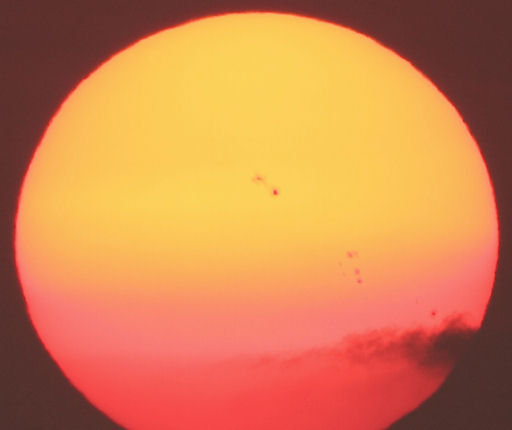 Even when the sun is dimmed by low-hanging clouds or haze, focused sunlight can still damage your eyes. Do not look at the sun through unfiltered optics of any kind. A safely-filtered White Light Solar Observing System is the best way to monitor these great sunspots. (SpaceWeather) 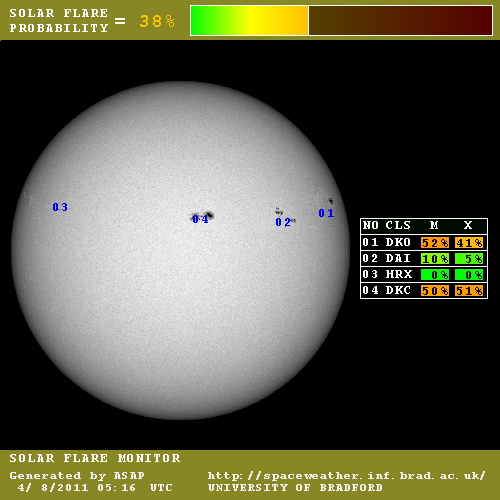 A solar flare is an explosion on the Sun that happens when energy stored in twisted magnetic fields (usually above sunspots) is suddenly released. Flares produce a burst of radiation across the electromagnetic spectrum, from radio waves to x-rays and gamma-rays. <more information >

Each category for x-ray flares has nine subdivisions ranging from, e.g., C1 to C9, M1 to M9, and X1 to X9. In this figure, the three indicated flares registered (from left to right) X2, M5, and X6

SOHO Real Time GIF Movies
The latest 48 hours worth of data are available here as animated GIF movies. The movies are updated every hour that we are in real-time contact with the satellite (see contact times and observation targets). See also Daily MPEG files for older data.