Dust over the Gulf of Aden

Thick dust blew off the coast of Somalia and over the Gulf of Aden in early August 2011. The Moderate Resolution Imaging Spectroradiometer (MODIS) on NASA’s Aqua satellite captured this natural-color image on August 4, 2011. 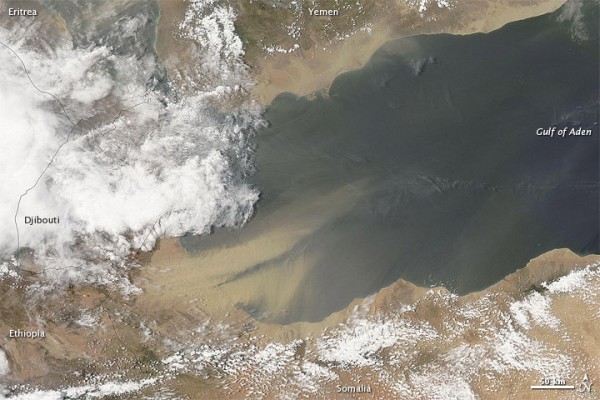 The dust plumes are thick enough to completely hide the land and ocean surface below. They appear to arise within about 50 kilometers (30 miles) of the coast. A cloudbank hovers over neighboring Djibouti, and these clouds could be related to the same weather system that has stirred the dust.

Dust blowing over the Gulf of Aden is not unusual. But when MODIS took this picture, the east African countries of Djibouti, Kenya, Somalia, and Ethiopia were suffering from severe drought leading to famine. Southern Somalia appeared to be hardest hit by the dry conditions. (EarthObservatory)