GDACS writes that this earthquake can have a low humanitarian impact based on the magnitude and the affected population and their vulnerability. There are no people living within 100 km radius.

No tsunami warning was issued associated with this earthquake. 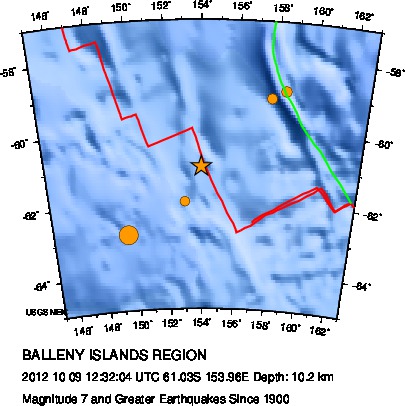 The Balleny Islands (66°55′S 163°45′E) are a series of uninhabited islands in the Southern Ocean extending from 66°15′ to 67°35’S and 162°30′ to 165°00’E. The group extends for about 160 km (99 mi) in a northwest-southeast direction. The islands are heavily glaciated and are of volcanic origin. Glaciers project from their slopes into the sea. The islands were formed by the so-called Balleny hotspot.

In the archipelago, the Buckle, Sturge and Young Islands are examples of stratovolcanoes. Strong earthquakes very close to the islands are rare, but tremors of moderate strength do occur over the Pacific–Antarctic Ridge, Macquarie Triple Junction and Pacific Rim between the Balleny Islands and Macquarie Island. Other earthquakes occur near the Southeast Indian Ridge and Balleny Fracture Zone, including a magnitude 8.1 earthquake in 1998 that struck just over 700 km (430 mi) west-northwest of the Islands.