Sunspot 1577 generated a long duration C3.7 solar flare which hurled a coronal mass ejection (CME) almost directly toward Earth on September 28. Proton levels reached the S1 Minor Radiation Storm level soon after the event. The proton event linked to the C3.7 flare is officially over, but the proton level remains high and might go up again during the next 48 hours.

The full moon may make viewing the aurora more difficult, but high latitude aurora watchers should be on the lookout during that time, nonetheless.

Two other CMEs were observed during the last 24 hours. One is a halo CME observed by LASCO on September 28 at 10:36 UTC at the farside. The other one is observed by COR2 coronagraphs on September 29 at 09:00 UTC. The source region seems to be beyond the west limb as observed from Earth.

Numerous weak C-class events were observed during the past 24 hours, mostly from Regions 1575 and 1577. New Region 1583 emerged on the disk as a simple bipolar group. No significant changes were observed from the remainder of the disk and limb. 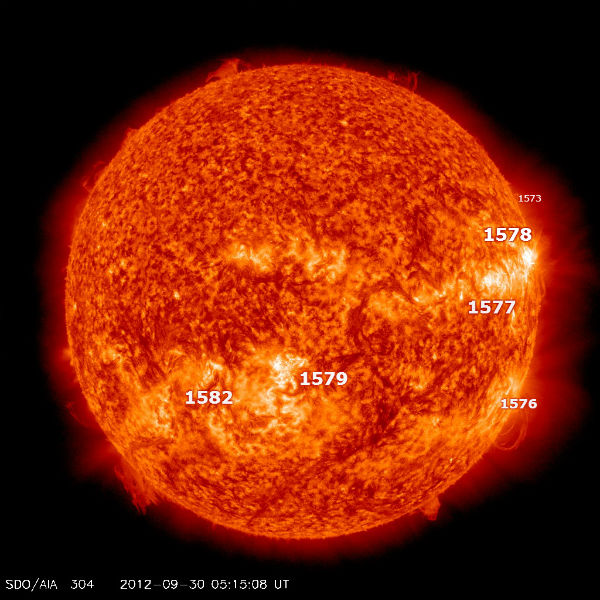 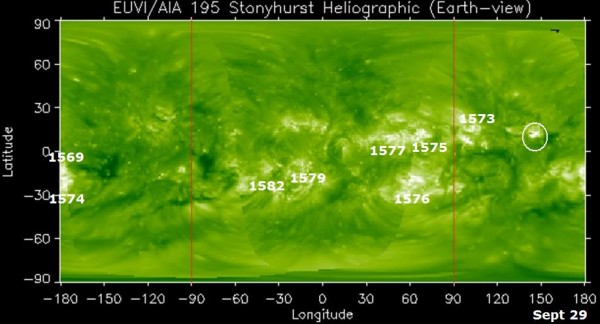 ACE satellite measurements indicated a steady decline in wind speed from about 325 km/s to near 275 km/s while the Bz component of the interplanetary magnetic field did not vary much beyond +/- 3 nT. At about

There is a risk for isolated C flares from Sunspots 1577 and 1579, which puts the expected solar activity at eruptive levels. NOAA/SWPC forecasters estimate that there is 10 % chances for M-class solar flares in the next 48 hours.