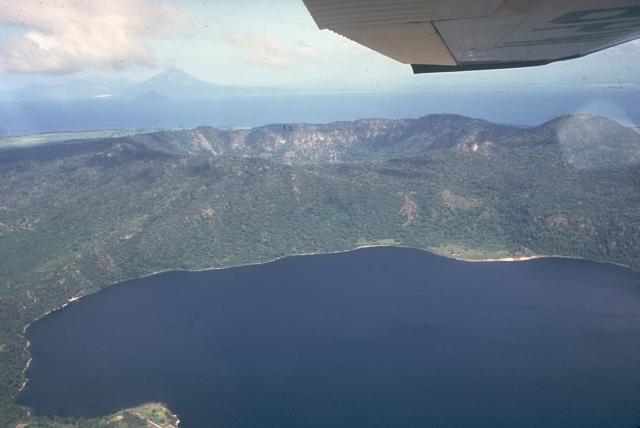 Volcanic tremors triggered by massive Costa Rican M 7.6 earthquake on September 5, 2012 placed Nicaraguan Apoyeque volcano on green alert. This volcano is located northwest of the Nicaraguan capital Managua and is now being continually monitored for volcanic tremors. Most quakes are located around the Laguna Xiloá, one of the volcano’s active vents. Nicaraguan Institute of Territorial Studies (INETER) registered 21 low-intensity volcano-related tremors between Thursday afternoon and Friday morning (September 6 – 7, 2012), prompting the government to issue a green advisory alert.

Seismic activity near the volcano, located 10 kilometers northwest of Managua, “decreased Friday morning, but it doesn’t mean that it has disappeared,” INETER Geophysics Director Angélica Muñoz said. She also announced that a group of experts will travel to the volcano to investigate the earthquakes causes.

The Apoyeque volcanic complex occupies the broad Chiltepe Peninsula, which extends into south-central Lake Managua. The peninsula is part of the Chiltepe pyroclastic shield volcano, one of three large ignimbrite shields on the Nicaraguan volcanic front. A 2.8-km wide, 400-m-deep, lake-filled caldera whose floor lies near sea level truncates the low Apoyeque volcano, which rises only about 500 m above the lake shore. The caldera was the source of a thick mantle of dacitic pumice that blankets the surrounding area. The 2.5 x 3 km wide lake-filled Xiloá (Jiloá) maar, is located immediately SE of Apoyeque. The Talpetatl lava dome was constructed between Laguna Xiloá and Lake Managua. Pumiceous pyroclastic flows from Laguna Xiloá were erupted about 6100 years ago and overlie deposits of comparable age from the Masaya plinian eruption.

Featured image: Apoyeque stratovolcano forms the large Chiltepe Peninsula in central Lake Managua. A 2.8-km wide, 500-m-deep caldera truncates the volcano’s summit, below and to the left of the airplane wing. Laguna de Jiloa, the large lake in the foreground, lies immediately SE of Apoyeque. The age of the latest eruption of Apoyeque is not known, but human footprints underlie pumice deposits thought to originate from Apoyeque volcano or a nearby vent beneath Lake Managua. Momotombo volcano is visible in the distance to the NW across Lake Managua. Photo by Jaime Incer, 1981.