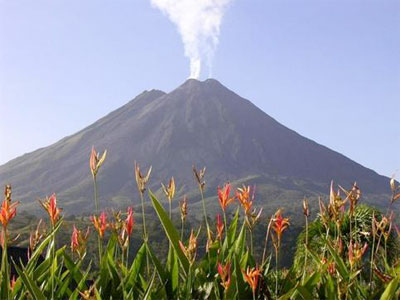 At least four of the seven active volcanoes in Costa Rica, Arenal (Alajuela), Rincon de la Vieja (Guanacaste), Turrialba (Cartago) and Poás (Alajuela), are in the crosshairs of scientists after 7.6 magnitude earthquake that struck the country on September 6, 2012. Even a small shift under one of these giants could cause an eruption scientists said.

According to specialists agree Volcanological and Seismological Observatory of Costa Rica (OVSICORI-A) and the National Seismological Network (RSN: ICE-UCR), due to the size of the earthquake, it is normal volcanic structures, especially those already vulnerable are affected. There is a rearrangement of material and even chemical changes.

The clearest example is the Arenal, where locals reported a noise characteristic of rolling boulders. ”We know there is a cave in the north, in the direction of the community of La Palma,” said Maria Martinez geochemistry, OVSICORI.

A team of this institution made field visit to the site and will release more information today.

“In the Poas, how little we could see the rangers (by weather), report no noticeable landslides and cracks,” he added.

However, Raul Mora, the RSN, ensures that the most noticeable changes have been in its lagoon. ”It looks much sulfur yellow spots on the lake, which is average at Poás before the earthquake but were not.”

In the Turrialba volcano has reported a slight collapse, but “the bottom” of the colossus, rather than volcanic structure. ”The emission level is similar to what was observed previously,” said the expert OVSICORI.

Because there have been earthquakes there, the RSN yesterday decided to install a seismological station between between that and the Irazu volcano.

This is done so that in the medium term is uncertain whether the earthquakes that occur there (as replicas) are the result of a tectonic or volcano itself.

Scientists have not yet visited the Rincon de la Vieja, but have received reports from neighbors (who live about 17 miles west of the volcano), who claim that the crystalline water normally receive from a nascent nearby nature has a milky consistency ” apparently mixed with sulfur. ”

“He also mentioned alleged cracks opened in the north, but we have not confirmed. We also know that, from time to time, there looms a steam plume. That happens from days before the earthquake, “explained Martinez.