America's Pacific Northwest has a 37% chance of being hit by a magnitude 8 or larger earthquake in the next 50 years, a new study shows.

That's more than double previous estimates of a 10-15% risk. Great Subduction Zone earthquakes are the largest earthquakes in the world, and can exceed magnitude 9.0. Earthquake size is proportional to fault area, and the Cascadia Subduction Zone is a very long sloping fault that stretches from mid-Vancouver Island to Northern California.

It separates the Juan de Fuca and North American plates. Because of the very large fault area, the Cascadia Subduction Zone could produce a very large earthquake. Thermal and deformation studies indicate that the locked zone is fully locked for 60 kilometers (about 40 miles) downdip from the deformation front. Further downdip, there is a transition from fully locked to aseismic sliding. 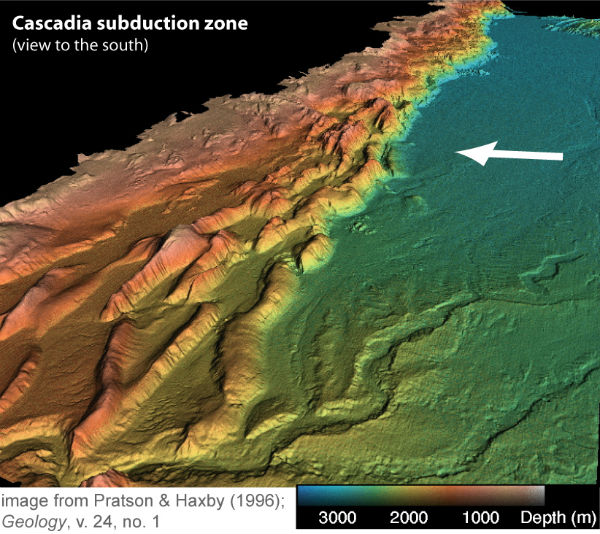 Ocean floor is sinking below the continental plate offshore of Washington and Oregon. The North American Plate moves in a general southwest direction, overriding the oceanic plate. The Cascadia Subduction Zone is where the two plates meet. The zone separates the Juan de Fuca Plate, Explorer Plate, Gorda Plate, and North American Plate. Here, the oceanic crust of the Pacific Ocean has been sinking beneath the continent for about 200 million years, and currently does so at a rate of approximately 40 mm/yr. Major cities affected by a disturbance in this subduction zone would include Vancouver and Victoria, British Columbia; Seattle, Washington; Portland, Oregon; and Sacramento, California. 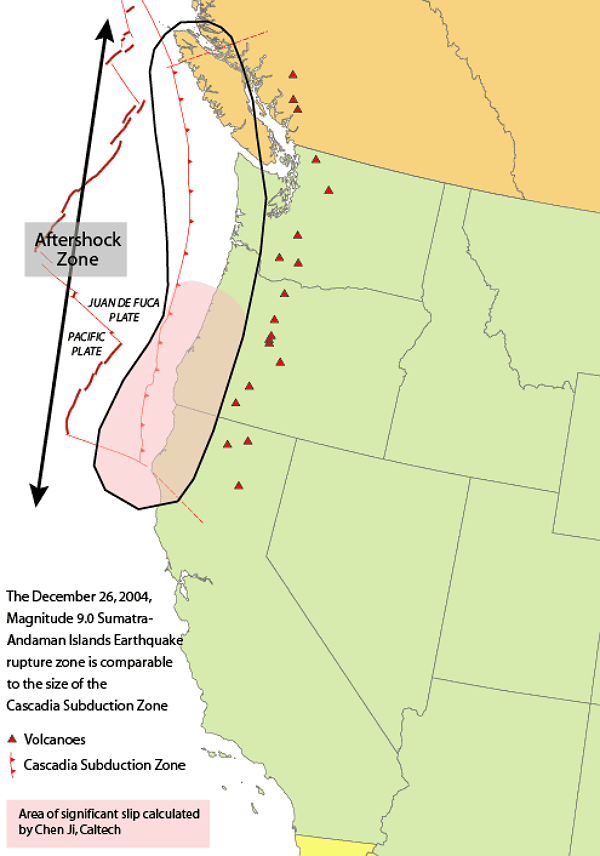 Written by researchers at Oregon State University, and published online by the U.S. Geological Survey, the study concludes that there is a 40 percent chance of a major earthquake in the Coos Bay, Ore., region during the next 50 years. And that earthquake could approach the intensity of the Tohoku quake that devastated Japan in March of 2011. The publication of the peer-reviewed analysis may do more than raise awareness of earthquake hazards and risks, experts say. The actuarial table and history of earthquake strength and frequency may eventually lead to an update in the state’s building codes. Geologists and civil engineers have broadly determined that the Pacific Northwest region is not well prepared for such a colossal earthquake. The tsunami produced may reach heights of approximately 30 meters (100 ft).

A comprehensive 13-year analysis of the Cascadia Subduction Zone confirms that the region has had numerous earthquakes over the past 10,000 years, and suggests that the southern Oregon coast may be most vulnerable based on recurrence frequency. Tectonic processes active in the Cascadia subduction zone region include accretion, subduction, deep earthquakes, and active volcanism that has included such notable eruptions as Mount Mazama (Crater Lake) about 7,500 years ago, Mount Meager about 2,350 years ago and Mount St. Helens in 1980. Turbidite systems along the continental margin of Cascadia Basin from Vancouver Island, Canada, to Cape Mendocino, California, United States, have been investigated with swath bathymetry; newly collected and archive piston, gravity, kasten, and box cores; and accelerator mass spectrometry radiocarbon dates. 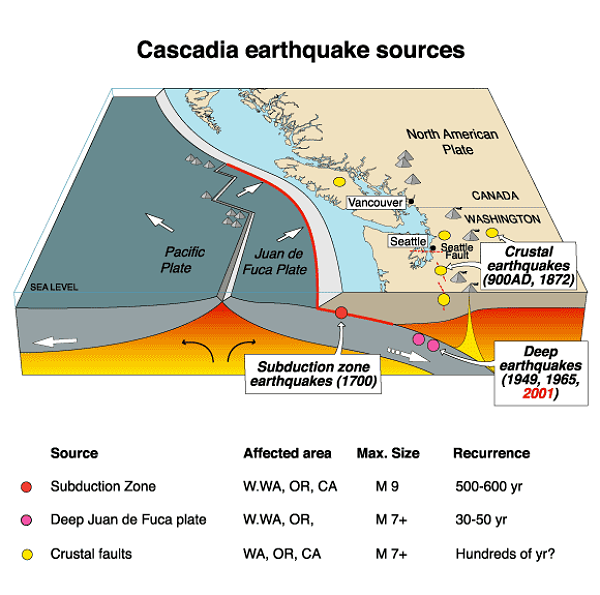 According to Chris Goldfinger, a professor in OSU's College of Earth, Ocean, and Atmospheric Sciences and lead author of the study, the southern margin of Cascadia has a much higher recurrence level for major earthquakes than the northern end and it is overdue for a rupture. However, that doesn't mean that an earthquake couldn't strike first along the northern half, from Newport, Oregon, to Vancouver Island. Major earthquakes tend to strike more frequently along the southern end - every 240 years or so - and it has been longer than that since it last happened. The probability for an earthquake on the southern part of the fault is more than double that of the northern end.

The Goldfinger-led study took four years to complete and is based on 13 years of research. At 184 pages, it is the most comprehensive overview ever written of the Cascadia Subduction Zone, a region off the Northwest coast where the Juan de Fuca tectonic plate is being subducted beneath the continent. Once thought to be a continuous fault line, Cascadia is now known to be at least partially segmented. This segmentation is reflected in the region's earthquake history, Goldfinger noted. 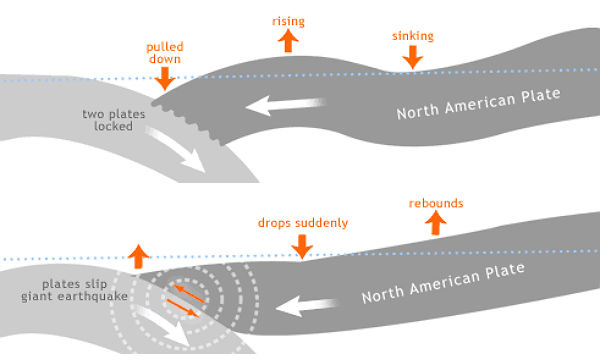 The Juan de Fuca Plate is pushing deep under the North American Plate. The colliding edges of these plates are locked, one plate pressed into the other. As the plates press and move, stress builds up -- until the lock breaks. The plates slip suddenly, causing a subduction zone earthquake. (Credit: ECY/Washington Coast)

Over the past 10,000 years, there have been 19 earthquakes that extended along most of the margin, stretching from southern Vancouver Island to the Oregon-California border. These would typically be of a magnitude from about 8.7 to 9.2 - really huge earthquakes. Researchers have also determined that there have been 22 additional earthquakes that involved just the southern end of the fault. The last mega-earthquake to strike the Pacific Northwest occurred on Jan. 26, 1700. Written records in Japan document how an ensuing tsunami destroyed that year's rice crop stored in warehouses.

The clock is ticking on when a major earthquake will next strike, Jay Patton, an OSU doctoral student and a co-author on the study. 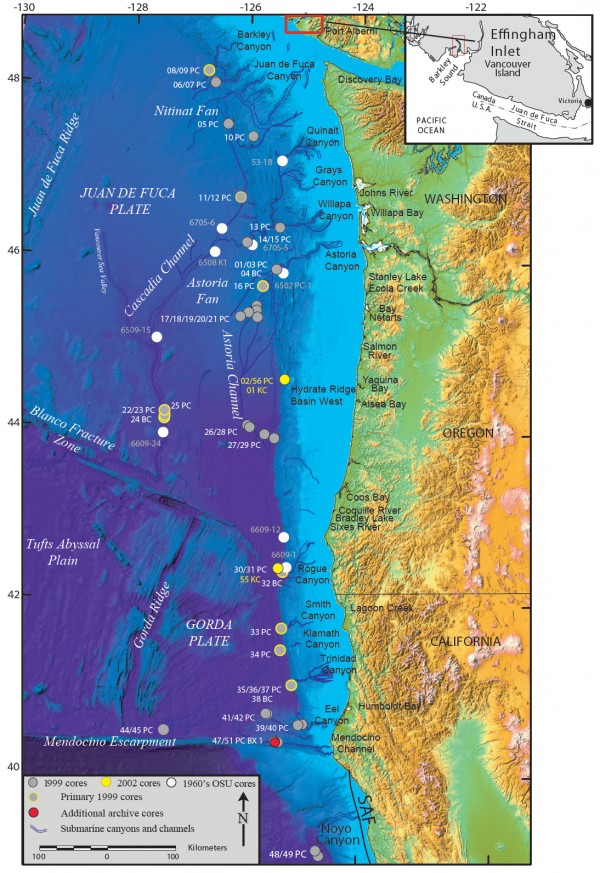 When a major offshore earthquake occurs, the disturbance causes mud and sand to begin streaming down the continental margins and into the undersea canyons. Coarse sediments called turbidites run out onto the abyssal plain; these sediments stand out distinctly from the fine particulate matter that accumulates on a regular basis between major tectonic events. By dating the fine particles through carbon-14 analysis and other methods, Goldfinger and colleagues can estimate with a great deal of accuracy when major earthquakes have occurred over the past 10,000 years.

Going back further than 10,000 years has been difficult because the sea level used to be lower and West Coast rivers emptied directly into offshore canyons. Because of that, it is difficult to distinguish between storm debris and earthquake turbidites.

SeaMarc 1A sidescan mosaic of the Daisy bank Failt Zone on the upper slope off central Oregon. Sinistral motion and a left bend at center have opend a small pull-apart basin. drag folding with a sinistal motion sense visible at right.

The turbidite data matches up almost perfectly with the tsunami record that goes back about 3,500 years. Tsunamis don't always leave a signature, but those that do through coastal subsidence or marsh deposits coincide quite well with the earthquake history.

Violent shaking will last at least two minutes. The ocean floor will drop, most likely creating a tsunami that will strike long stretches of the coast. The central Olympic peninsula will suddenly rise, while some coastal areas will sink below sea level.

If an earthquake occurs at the coast

Protect yourself and your family