Researchers were able to get a better idea of what kind of megathrust seismic activity was behind the 1700 Cascadia earthquake by combining models of Magnitude 9 to 9.2 earthquakes on the Cascadia Subduction Zone with geological evidence of past coastal changes.

Study authors Erin Wirth and Arthur Frankel of the U.S. Geological Survey indicated that a rupture extending offshore for most of the Pacific Northwest could cause the pattern of coastal subsidence in the geologic evidence from the 1700 earthquake with magnitude 8.7 and 9.2.

An earthquake rupture that contains smaller patches of high-stress drop and strong motion-generating subevents matched the fault variations in coastal subsidence observed from southern Oregon to British Columbia from the 1700 earthquake.

The seismic danger linked to Cascadia megathrust earthquakes depends on how far the rupture extends landward and the differences in slip along the fault.

This new study, published in the Bulletin of the Seismological Society of America, could help improve seismic hazard estimates for the area, as well as estimates of ground shaking intensity in Portland, Oregon, Seattle, Washington and Vancouver, British Columbia.

"We looked at various magnitude 9 rupture scenarios for Cascadia, to see how the coastal land level changes under those scenarios and you can't match the paleoseismic estimates for how the land level changed along the Pacific Northwest coast during the 1700 Cascadia earthquake," Wirth noted.

"This may mean that these scenarios deserve less weight in assessing the overall seismic hazard for Cascadia."

The researchers gathered data from other megathrust earthquakes around the world, including the 2010 Magnitude 8.8 Maule, Chile, and the 2011 Magnitude 9.0 in Tohoku, Japan.

One of the features discovered in these and other megathrust events worldwide are distinct patches of strong, motion-generating subevents that occur in the deeper parts of the fault.

Wirth and Frankel stated that variations in coastal subsidence caused by the 1700 earthquake could be due to the location of the subevents.

However, it's important to improve the accuracy of paleoseismic estimates for how the land level changed during Cascadia earthquakes to make sure of this.

The reason behind the subevents has yet to be cleared, other than that these areas of the fault must generate high stress that can be released through powerful ground shaking. 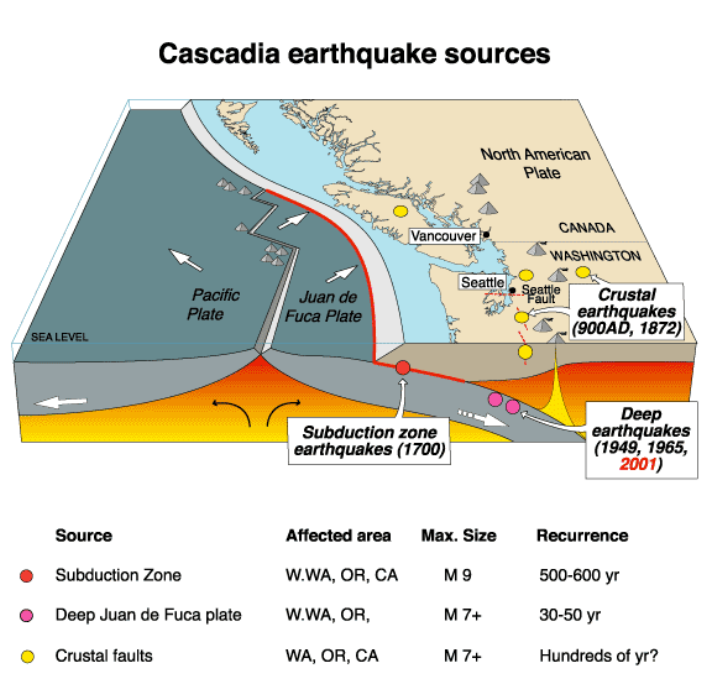 This might suggest that the subevents have a physical cause, such as the structure of the rocks along the fault that makes them strong. Another thing could be the changes in friction or fluid pore pressure related to their depth.

Wirth said that in the Tohoku and Maule earthquakes, "the frequency of ground shaking that is most damaging to buildings and infrastructure seemed to be radiated from these discrete patches on the fault."

Further research to understand the subevents could improve seismic hazard estimates in Cascadia, she added.

"If we could constrain the location of these subevents ahead of time, then you could anticipate where your strongest ground shaking might be."

Seismic hazard associated with Cascadia megathrust earthquakes is strongly dependent on the landward rupture extent and heterogeneous fault properties. We use 3D numerical simulations and a seismic velocity model for Cascadia to estimate coseismic deformation due to M 9–9.2 earthquake scenarios. Our earthquake source model is based on observations of the 2010 M 8.8 Maule and 2011 M 9.0 Tohoku earthquakes, which exhibited distinct strong motion‐generating subevents in the deep portion of the fault. We compare our estimates for land‐level change to paleoseismic estimates for coseismic coastal subsidence during the A.D. 1700 Cascadia earthquake. Results show that megathrust rupture extending to the 1 cm/yr locking contour provides a good match to geologic data. In addition, along‐strike variations in coastal subsidence can be matched by including low slip, strong motion‐generating subevents in the down‐dip region of the megathrust. This work demonstrates the potential to improve seismic hazard estimates for Cascadia earthquakes by comparing physics‐based earthquake simulations with geologic observations.