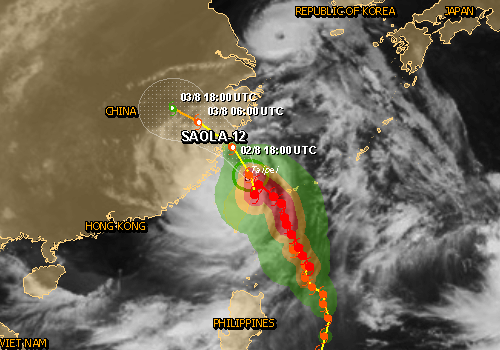 A slow-moving Tropical Cyclone/Typhoon Saola spawning torrential rains slammed into eastern Taiwan early Thursday, August 2, 2012. According to GDACS Saola can have a medium humanitarian impact based on the maximum sustained wind speed and the affected population and their vulnerability.  Farmlands were flooded and transportation disrupted. Saola turned capital of Taipei into a ghost town. Dozens of flights were cancelled at Taipei’s main international airport.

Up to 8.8 million people can be affected by wind speeds of cyclone strength or above. In addition, 950000 people are living in coastal areas below 5m and can therefore be affected by storm surge.

The storm made landfall near the eastern coastal city of Hualien just before daybreak, before veering northward and hugging the coast. It was expected to pass near the northern port city of Keelung and skirt the Taipei suburbs by midday. Packing sustained winds of 118 km/h and gusts of 155 km/h, Saola’s slow speed — only 12 km/h — made it a virtual certainty that the heavy rains inundating northern Taiwan for the past 48 hours would continue through the weekend.

That raised the prospect of potentially devastating flooding in areas that have already absorbed more than 1,000 millimeters of rain since Tuesday.

Authorities ordered offices and businesses closed throughout northern Taiwan, including in Taipei. Normally busy streets in the capital were deserted during the morning rush hour, as cleanup crews laboured to clear them of hundreds of trees and branches felled during the night by Saola’s ferocious approach.

Television footage showed hectare upon hectare of flooded farmland in low-lying coastal areas, punctuated by scenes of raging rivers and roads blocked by mudslides in the island’s mountainous centre. 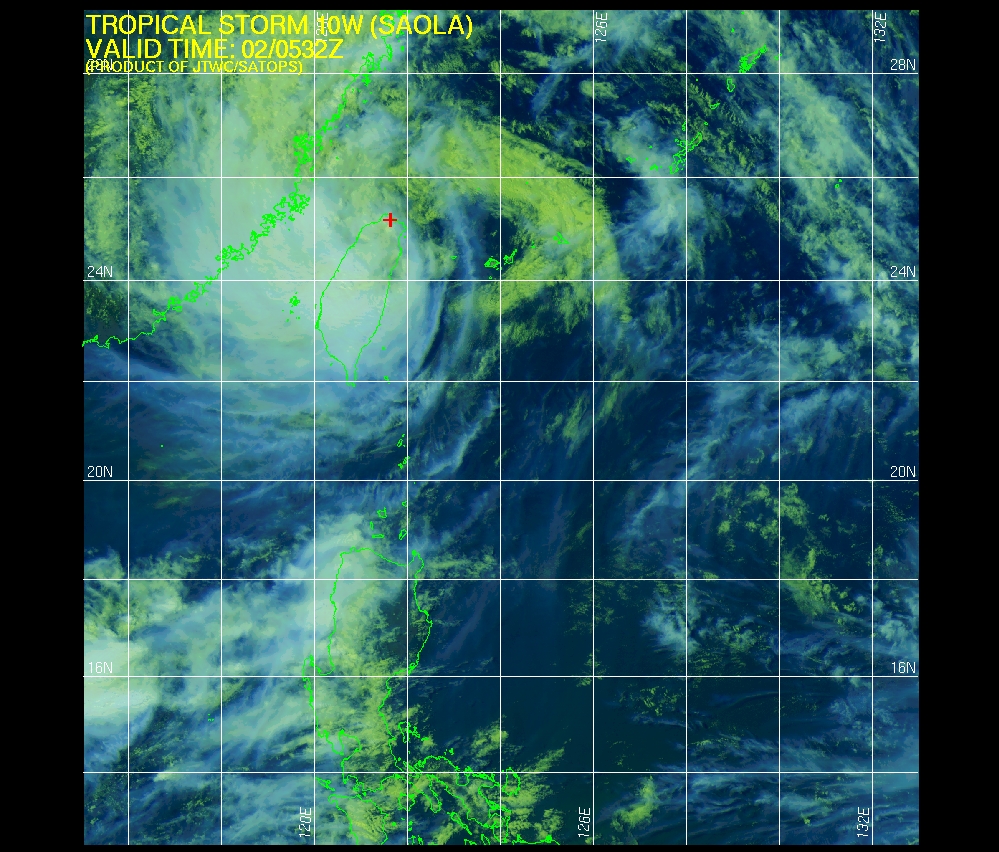 The Defence Ministry mobilized 48,000 soldiers to help mitigate the storm’s impact, dispatching many to help hard-pressed farmers try to save threatened fruit and vegetable harvests.

On its way toward Taiwan and China Saola caused deaths and destruction on Philippines. The Philippine Red Cross (PRC) has swung to action as the effects of Typhoon Saola continue to be felt across the island of Luzon.

Although it did not make landfall, Typhoon Saola (local name: Gener) enhanced southwest monsoon rains which caused flooding in low-lying areas of Luzon, including Metro Manila. According to the National Disaster Risk Reduction and Management Council (NDRRMC) update issued on 1 August 2012, effects of the typhoon have left at least 14 people dead, one missing and five injured. At the peak, some 1,900 families sought safer shelter in 43 evacuation centres, although most have started going back to their residences as flood waters subside.

Authorities at the provincial, municipal and barangay (village) levels responded swiftly to the situation and conducted pre-emptive evacuation of families in low-lying areas as well as search and rescue. Other actions include relief distributions and road clearing operations. Based on its mandate as auxiliary to the authorities in providing humanitarian services in times of emergency and disaster, PRC has served ready-to-eat meals, assorted food items and non-food items to more than 2,000 persons, mainly in evacuation centres.

Tropical storm (TS) 10w (Saola), located approximately 10 nm northeast of Taipei, Taiwan, has tracked north-northwestward at 11 knots over the past six hours. Animated multispectral satellite imagery shows the system has rapidly weakened as it dragged across the rugged terrain of northern Taiwan. The initial position and intensity were based on a radar image loop from the Taiwan Central

Weather Bureau and referenced from multiple surface observations from the vicinity of Taipei with good confidence. Upper level analysis indicates the system is just to the west of a ridge axis in an area of light (05-10 knot) vertical wind shear. Animated water vapor imagery indicates good radial outflow albeit significantly warmed convective tops. The cyclone is now tracking along the southwestern periphery of a deep-layered subtropical ridge (str) centered over Honshu, Japan. This str has solidly assumed steering of the system.

TS Saola is expected to accelerate northwestward and slightly intensify as it drifts across the Taiwan strait before it makes a second and final landfall near Fuzhou, China. Dynamic model guidance is in tight agreement and supports the high confidence forecast track. TS Saola is expected to dissipate as a significant tropical cyclone over land.