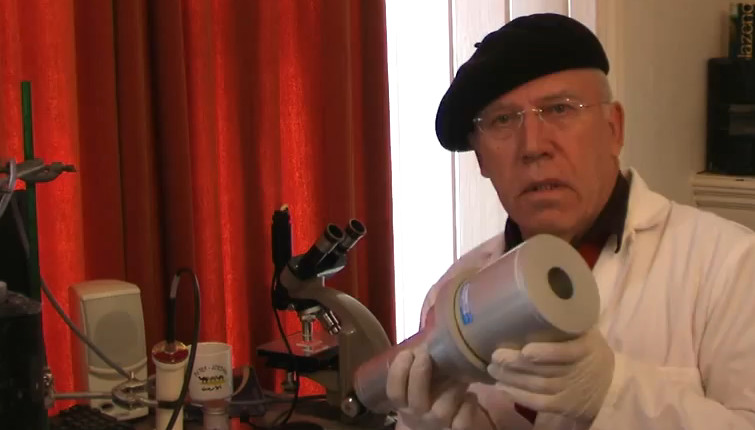 Christopher Busby, a PhD in chemical physics, and the former member of the Britain’s Committee Examining Risks of Internal Emitters is best known for raising concerns about low-level radiation.

Since the tsunami and power-plant explosion in Japan in March 2011, he’s zeroed in on radiation levels in car filters, which capture contaminated dust particles.

In the video below, Busby explains that the highest level of radiation that he’s seen so far came from an air-conditioning unit in a 20th-storey apartment in central Tokyo.

Busby placed a tenth of a gram of dust from the suite on a gamma ray spectrometer, noting that the concentration of cesium-137 was “enormously high”.

“So we have a serious problem in Tokyo,” Busby says in the video.

He mentions that this dust registered hundreds of thousands of Becquerels per kilogram, which is off the charts in terms of risk to human health.

Busby, who has ties to the Green party, has claimed that there could be an additional 400,000 cases of cancer among those living within 200 kilometres of the disaster. The beret-wearing scientist generated some criticism when he sold a mineral supplement online that he claimed could diminish the effects of exposure to radiation.

“I think this is quite a serious discovery,” Busby states. “I think that at minimum, what should be done here is people who are servicing these filters should be told that they represent a serious hazard for inhalation of the dust.”

Meanwhile, RadTest4U.com has announced no-cost testing of air filters for radioactive hot particles that continue to rain down on N. America as a result of the Fukushima Daiichi nuclear disaster in Japan. Anyone can participate by shipping a used air filter to the laboratory. Test results, including a list of any radioisotopes detected and the associated dose rates are returned via email.

After more than one year, the ongoing meltdowns of three reactors at the Fukushima Daiichi nuclear power plant in Japan is renewing concern across N. America about what types and amounts of fallout are still being deposited in our Nation’s fields, lakes and in the air we breathe. While it is already known that the disaster is contaminating the Pacific Ocean food chain from plankton up to larger migratory fish with vast amounts of radioactive materials, scant information is available to the general public on the impact inland.

Are there radioactive ‘hot particles’ floating around in the air in a local area that could be breathed in? What about inside of the home? Without any way to test for local contamination or exposure, many individuals could also be worrying needlessly, especially about minute, non-dangerous, increases over natural background radiation.

If people want to understand what their family has been breathing and what’s been getting deposited on the ground and into the water in their local area, they may not need to look any further than the used air filter in their car, home furnace or vacuum cleaner. The small particulate matter that makes up fallout generally gets trapped by these filters making them an excellent collection points for analysis.

Testing and analytical services for the program are provided by KI4U, Inc. of Gonzales, TX. (http://www.ki4u.com). Widely regarded as one of the nations most experienced radiological instrument testing and calibration labs, KI4U has instruments, staffing and experience necessary to effectively carry out the testing program.

Each filter will be evaluated using the state-of-the-art radioactive isotope identification and dose rate calibration equipment. Test results, including a list of any isotopes detected, are returned via email approximately 7-14 days after the filters are received. There are no charges associated with the testing or the report.

While participant contact information is kept strictly private, national test results will be reported via an online map as well as weekly via a weekly email newsletter