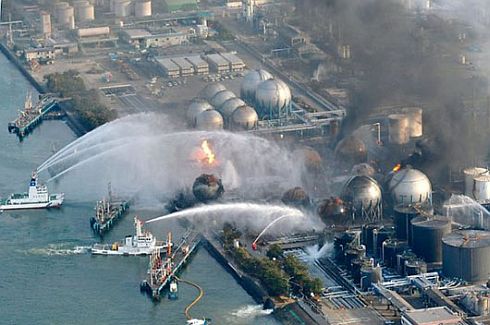 Japanese officials are currently engaging in talks with Russian diplomats about where tens of millions of Japanese refugees might relocate in the very-likely event that the Fukushima Daiichi nuclear facility’s Reactor 4 completely collapses. According to a recent report by EUTimes.net, Japanese authorities have indicated that as many as 40 million Japanese people are in “extreme danger” of radiation poisoning, and many eastern cities, including Tokyo, may have to be evacuated in the next few weeks or months to avoid extreme radiation poisoning.

As we continue to report, the situation at Fukushima is dire, to say the least. Reactor 4 is on the verge of complete collapse (http://www.naturalnews.com/), which would send radioactive nuclear fuel from thousands of fuel rods directly into the atmosphere. These fuel rods, after all, are already exposed to the open air, but the full release of their fuel would cause not only a regional catastrophe, but also a global nuclear holocaust.

“A report released in February by the Independent Investigation Commission on the Fukushima Daiichi Nuclear Accident stated that the storage pool of the plant’s No. 4 reactor has clearly been shown to be ‘the weakest link’ in the parallel, chain-reaction crises of the nuclear disaster,” reported the Mainichi Daily News recently.

“The worst-case scenario drawn up by the government includes not only the collapse of the No. 4 reactor pool, but the disintegration of spent fuel rods from all the plant’s other reactors. If this were to happen, residents in the Tokyo metropolitan area would be forced to evacuate.”

So in an effort to establish contingency for the Japanese people in closest proximity to the fray, authorities are considering potentially relocating tens of millions of Japanese people to the Kuril Islands, which are located in Russia’s Sakhalin Oblast region, or potentially even to China, where hundreds of uninhabited “ghost town” cities with no apparent use could house at least 64 million refugees. If this relocation were to occur, Japan would largely become a barren wasteland.

For the Japanese people, the Fukushima disaster represents the complete demise of their nation, as literally nothing is being done to contain the thousands of exposed fuel rods that will eventually explode when Reactor 4 fails. But the consequences of all this are not limited to just Japan, as the rest of the world, including the U.S., will bear the brunt of this ticking nuclear time-bomb as well. We are, in fact, already suffering the consequences of this “nuclear war without a war” (http://globalresearch.ca/).

Late last year, for example, it was reported that U.S. officials ordered the Tokyo Electric Power Company (TEPCO) to release three million gallons of radioactive waste into the Pacific Ocean. Now, according to The Intel Hub, this waste will soon arrive on the shores of the U.S. West Coast, unbeknownst to the millions of Americans living in that region that will be exposed to it.

This new ‘wave’ of radiation is, of course, in addition to previous waves that have already killed thousands of people, many of whom were children, and sparked a considerable uptick in cancer cases. And as time goes on, more and more people living in America will begin to develop chronic conditions as a result of perpetual radiation poisoning from Fukushima, and many will die, all while the mainstream media remains willfully silent on the issue.

And the federal government has known all along that the Fukushima disaster is shaping up to be the most severe global catastrophe in recorded history, as was evidenced in a recent Freedom of Information Act (FOIA) request. Not only were federal authorities aware of the extreme dangers posed by Fukushima from the early days of the disaster, but they also orchestrated misinformation campaigns to keep the American people, and the rest of the world, in the dark about the truth (http://www.naturalnews.com/).

Since neither the U.S. nor the Japanese governments appear willing to actually deal with Fukushima, and particularly the Reactor 4 situation, NaturalNews is calling on the United Nations (U.N.) to take swift action. A new petition urges the U.N. to organize a Nuclear Security Summit to address the problem of Reactor 4, and also establish an independent assessment team to somehow stabilize it and prevent its fuel from potentially destroying all life on earth.