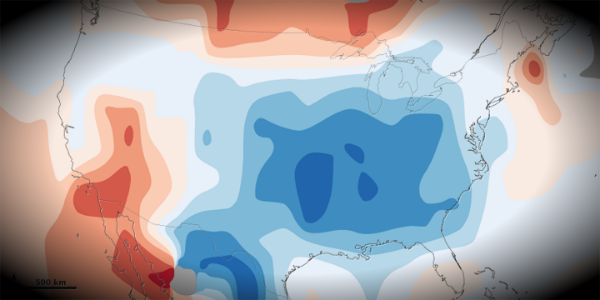 Temperatures are increasing on a global scale. But in the central and eastern United States warming has not kept pace with other parts of the world over much of the last century.

Parts of the United States cooled between 1930 and 1990. Climate scientists have taken to calling the large area of cooling a “warming hole” because the areas surrounding it have warmed at a faster rate. As shown in this map bellow, which is based on data from NASA’s Surface Temperature Analysis (GISTEMP), areas of the greatest cooling are blue; those that warmed are red. 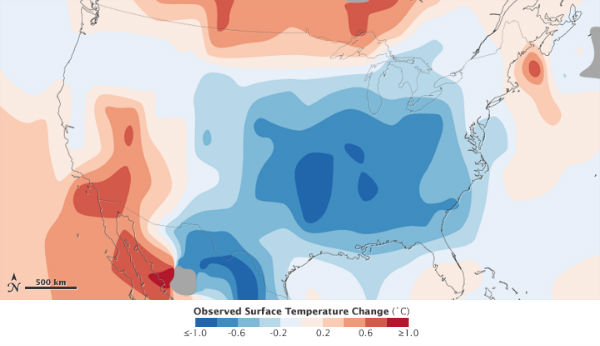 The right cause of “warming hole” over US have puzzled researchers for more than a decade. Some researchers suggested natural variations in sea surface temperatures might be responsible, but a new study puts the focus on sulfates, a type of aerosol produced by coal power plants that’s known for causing acid rain. Sulfates are light-colored, and they cause cooling by scattering and reflecting sunlight. They also lower temperatures indirectly by making clouds more reflective and long-lasting.

The researchers, led by Eric Leibensperger of the Massachusetts Institute of Technology, used global climate models to estimate the cooling effect sulfates have had on the climate of the United States since 1950. As seen in the map bellow, they found that between 1970 and 1990—the period when sulfates were at their highest levels—average temperatures were nearly 1°Celsius (1.8°Fahrenheit) cooler in a core area centered on Arkansas and Missouri and about 0.7°Celsius cooler in a larger tear-drop region throughout the Midwest and Mid-Atlantic. The cooling effect extended into the North Atlantic Ocean as well; sulfate pollution lowered sea surface temperatures there by 0.3°Celsius. 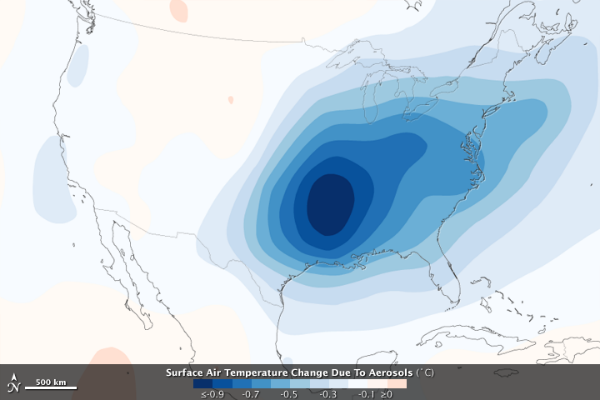 Research also shows that the cooling effect from sulfates is diminishing. According to Environmental Protection Agency estimates, the amount of sulfur dioxide (a precursor to sulfates) released into the atmosphere fell by 58 % between 1980 and 2010. Satellites have confirmed the decrease; the Ozone Monitoring Instrument (OMI) on the Aqua satellite observed a sharp decline in sulfates over the eastern United States between 2005 and 2010.

As a response to the declining sulfate levels, Leibensperger’s modeling shows temperatures over the central and eastern United States have increased by 0.3°Celsius between 1980 and 2010. According to research, sulfate concentrations have declined so much already that the impact of future decreases won’t be nearly as substantial. (EarthObservatory)