There is an ongoing battle between the Sakurajima volcano and 50-km-away Sendai nuclear power plant in Kyushu, southwestern Japan. While the operator of the power plant aims to restart its idle nuclear reactors, a new strong eruption brings our attention back to issue of how safe our nuclear power plants are from the dangers posed by volcanoes.

Japan's new safety standards set by Nuclear Regulation Authority (NRA) ​in 2013 now require electric power companies to consider possible influences from volcanoes located within a radius of 160 kilometers from nuclear power plants. Because of this, Sendai operators examined the effects of eruptions from 39 volcanoes in what is called Japan's first serious evaluation of  the safety of nuclear power plants from the standpoint of the danger posed by volcanoes.

As far as the volcanic ash is considered, the evaluation concluded that it is sufficient to take measures based on the assumption that ash from Sakurajima volcano in Kagoshima Prefecture would accumulate in the compound of the Sendai nuclear power plant to a height of up to 15 centimeters…

However, as noted by Asahi Shimbun, "will those measures really work given the possibility that accumulation of volcanic ash to a height of only several millimeters will seriously impede workers and vehicles? If the intake of water to cool nuclear reactors is also impeded, the reactors will be immediately plunged into dangerous situations." 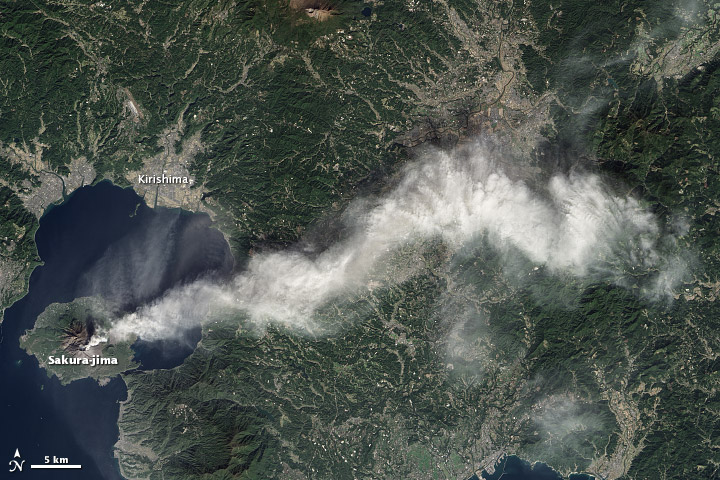 It is assumed that catastrophic eruptions in Japan occur about once every 6 000 – 10 000 years but no one can exactly say when or where the next one will happen. On the other hand, it is known that when they do happen the pyroclastic flows can bury an area of over 100 kilometers from the volcano.

Such massive eruptions can cover the entire Japan and all surrounding countries in thick volcanic ash and should such event occur while the plant is operating, the control over the station would definitely be lost.

"The major pyroclastic currents produced by Kumamoto Prefecture’s Mount Aso about 90 000 years ago burned down the entire northern half of Kyushu and traveled across the ocean to what are now Yamaguchi and Ehime prefectures. Pyroclastic flows caused by Kagoshima Prefecture’s Mount Aira 26 000 to 29 000 years ago completely destroyed southern Kyushu. Such eruptions are particularly common in Kyushu and Hokkaido." (Mainichi)

In earthquake vs the nuclear power plant scenario that took place in 2011, the earthquake definitely won. Such strong quakes are considered to happen once every 1 000 years but can science really say that Japan (and the rest of the world) is safe for the next 1 000 years?