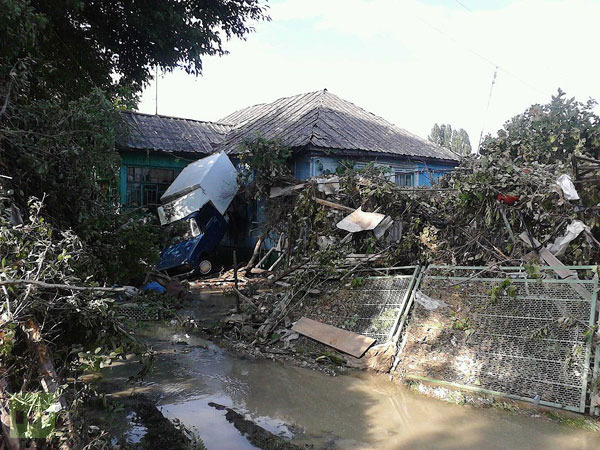 The worst flooding in decades in southern Russia’s Krasnodar Region, near the Black Sea, has killed at least 150 people and damaged over 5,000 homes. Chances of continued flooding and new damage and casualties remain high, as more heavy rain is expected to hit the area Sunday.

The flood was part of the aftermath of a giant storm that hit Krasnodar, dropping almost half a year’s rainfall on the region over two days. The most heavily affected areas are along the Russian Black Sea coast, which bore the brunt of the deluge as it rushed out to sea.

Eyewitnesses claim a seven-meter wave struck Krymsk in the middle of the night. The wave came down from the mountains, they say. The reasons are unknown, but one possible explanation, widely circulating in social networks, is that the water was discharged from reservoirs situated in the mountains near the town. The other is that the wave was caused by excessive rain.

Local authorities deny draining the local water storage and insist it is too far away from Krymsk to pose any danger to it. They also refute allegations that no warning was sent to the locals.

Cars and buildings were swept away by the deluge as the nearby Adagum River turned into a roaring nightmare. At least 150 people drowned after the entire city was completely submerged by flood waters on Saturday. But the death toll is likely to rise as rescuers reportedly continue to recover bodies.

According to Russia’s hydrometeorological service, the precipitation level in Krasnodar in the past 16 hours was four to five times higher than the usual monthly average.

The governor of the Krasnodar region stated that more than 5,000 residences were flooded overnight. In a statement, the Krasnodar authorities said altogether 13,000 people had been affected by the floods. They have declared Monday a day of mourning.

Regional governor Alexander Tkachev tweeted after flying over the affected area that there was “something unimaginable” going on in Krymsk. He said, quoted by the Russian Itar-Tass news agency, that “no-one can remember such floods in our history. There was nothing of the kind for the last 70 years”.

The Emergency Situations Ministry forecast that new rains with fresh gales up to 12 meters per second could hit the Krasnodar Territory in the coming two days.