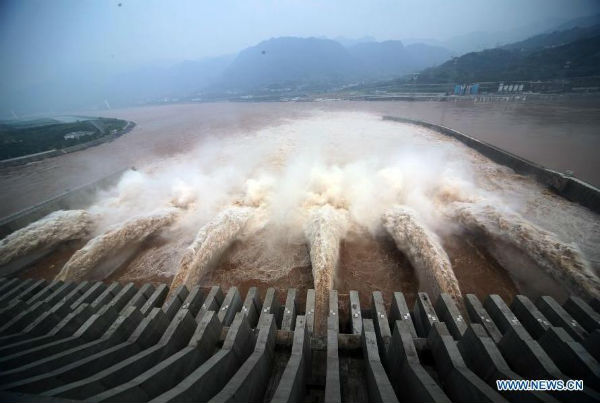 The giant and controversial Three Gorges Dam on China’s Yangtze River  started working at full capacity on Wednesday as the last of its 32 generators went into operation. Three Gorges Dam is the world’s largest hydropower project and largest base of clean energy according to Zhang Cheng, general manager of China Yangtze Power, the operator of the generators.

The Three Gorges Dam opened its sluices on Saturday as a flood with the peak flow of 56,000 cubic meters per second has pushed up the water level to more than 151 meters in its reservoir, six meters higher than its flood control level. The Three Gorges Dam, the world’s largest hydropower project, generates electricity, controls flooding by providing storage for water and adjusts shipping capacity on the Yangtze River, China’s longest waterway. 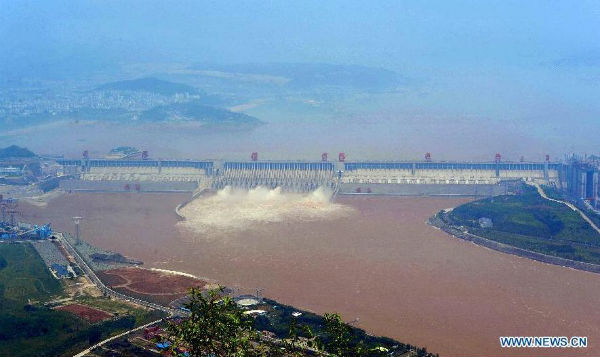 The dam, which first went into operation in 2003 at a cost of $22.5 billion, has a combined generating capacity of 22.5 million kilowatts (22,500 megawatts), the equivalent of fifteen nuclear reactors. The construction of the dam, which forced the relocation of 1.4 million people, has been heavily criticised by experts worldwide, and residents of nearby areas.

Beijing has long held up the dam as a symbol of its engineering prowess, a solution to the frequent floods of China’s longest river and a source of badly needed electricity. But in May last year Beijing admitted the dam had spawned a range of problems.  At current levels, 80% of the land in the area is experiencing erosion, depositing about 40 million tons of sediment into the Yangtze annually. 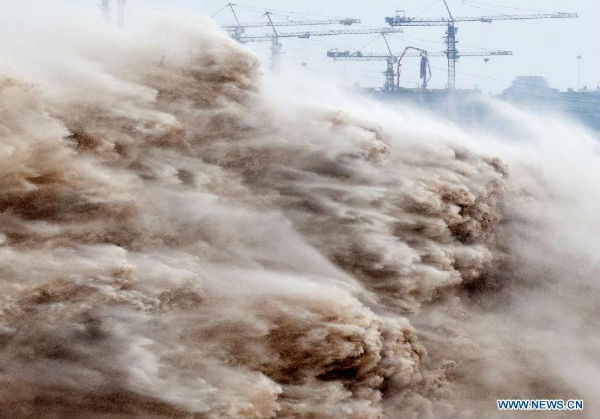 The project began in 1993 despite warnings the weight of the reservoir would dangerously alter central China’s geology, uproot millions of people, poison water supplies by trapping pollution and disrupt the Yangtze watershed. Located in Hubei province, the dam has created a reservoir stretching up to 600 kilometres (370 miles) through the scenic Three Gorges region, which is criss-crossed by geological fault lines.

Earthquake-induced peak ground acceleration coupled with the immense weight of the reservoir water might be able to breach the upstream face of the dam. Erosion in the reservoir, induced by rising water, causes frequent major landslides that have led to noticeable disturbance in the reservoir surface, including two incidents in May 2009 when somewhere between 20,000 and 50,000 cubic metres (26,000 and 65,000 cu yd) of material plunged into the flooded Wuxia Gorge of the Wu River. Also, in the first four months of 2010, there were 97 significant landslides. (Xinhua)