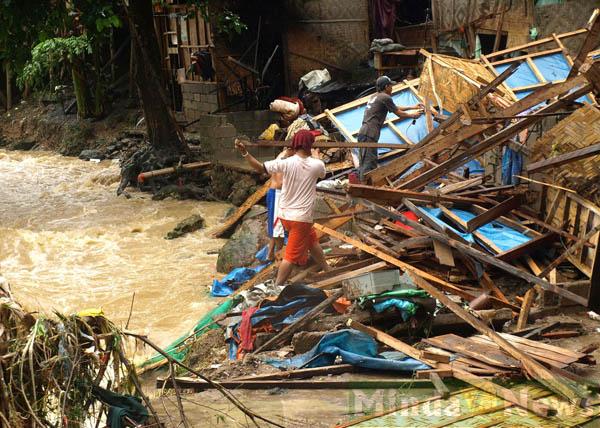 Two days of rain has flooded several villages and towns in southern Philippines and forced nearly 700 people to flee their homes on Tuesday, June 12, 2012 UTC. Two men died while a total of 250 houses were destroyed when a flashflood hit two villages in Glan town, Sarangani province Tuesday. National Disaster Risk Reduction and Management Council (NDRRMC) reported that parts of Sarangani, North Cotabato, Maguindanao and Sultan Kudarat provinces were flooded after two days of pounding rain set off by a southern monsoon. A new storm in the western Pacific was forecast to reach eastern Philippines later this week and could become the second typhoon of the year.

According to PhilStar, at least 118 fishermen were reported missing in Sarangani province as strong winds struck its coastal areas. The strong winds also brought heavy rains that in turn caused flashfloods in the coastal towns. 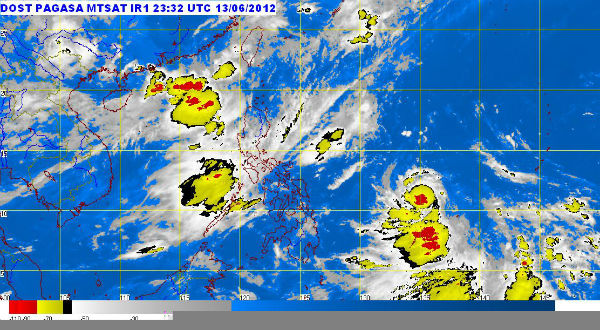 A flashflood also struck four villages in Kalamansig, Sultan Kudarat on Monday. It started around 9 p.m. and affected barangays Obial, Sta. Clara, Hinalaan, and Himulan. A total of 2,460 families were affected by the flooding, while 23 families were forcibly evacuated by the authorities. In Malaybalay, Bukidnon, a flashflood also struck barangays Cabangahan, Bangkud, Aglayan, and Linabo at 4:45 p.m. after Bugkaon River overflowed due to continuous heavy rains brought about by the shallow low pressure area. Some 44 families whose houses are situated near a riverbank in this city evacuated to higher grounds when floodwaters reached as high as 15 feet at around 1:30 a.m. Tuesday, residents said. Nurkaya Patadon, 42, one of the flood victims in this city, said many of their appliances and valuables were swept out to the Nuangan River, one of the longest rivers in North Cotabato. Patadon’s family, including 43 other families, decided to leave their homes for fear the waters might rise again due to torrential rains. Kasan Maruhom, one of the displaced residents, said that Tuesday’s flashfloods was the worst since 2000. 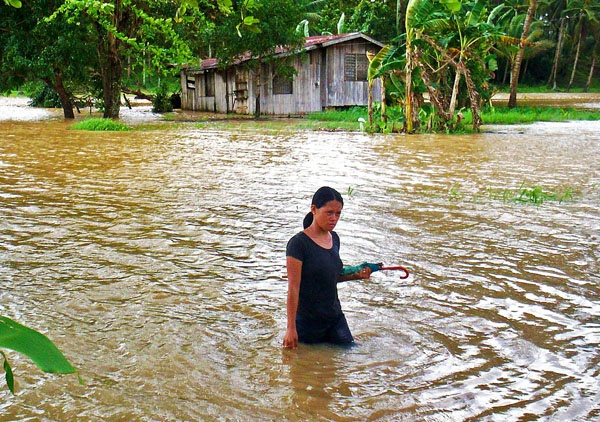 The waters of Nuangan River, already considered a dead river in Kidapawan City, became turbulent as heavy rains continue to fall across North Cotabato due to low pressure area, which brought widespread rain showers and thunderstorms.

Mayor Rodolfo Gantuangco has already ordered the immediate evacuation of the families living near the riverbanks, including Lapu-Lapu Street, Cotelco Village, and Licatan Subdivision, all in Poblacion here. A relocation site in Barangay Balindog, about five kilometers away from the Poblacion, is set for the victims. Authorities will declare this city under state of calamity so they can use a portion of their funds to help the flood victims. They already ordered the City Social Welfare and Development Office and the City Disaster Risk Reduction Management Council to assess and evaluate the situation and immediately conduct relief operations on Wednesday.

Featured image:  Residents retrieve whatever possessions they can find in their houses destroyed by a flood in Kidapawan City. (Credit: Geonarri Solmerano)