Tinakula is a conical stratovolcano which forms an island north of Nendo in Temotu Province, the Solomon Islands in South Pacific. It lies at the north end of the Santa Cruz Islands.  It is about 3.5 km wide and rises 851 m above sea level, but rises three or four km above the sea floor. On February 13th and 14th, 2012, NASA’s Moderate Resolution Imaging Spectroradiometer (MODIS) detected heat signatures on Tinakula, and a small plume was apparent in visible imagery (lower image). Over the past decade satellites have detected intermittent “thermal anomalies” that suggest eruptions have taken place, but eyewitness observations are infrequent Earth Observatory reported. 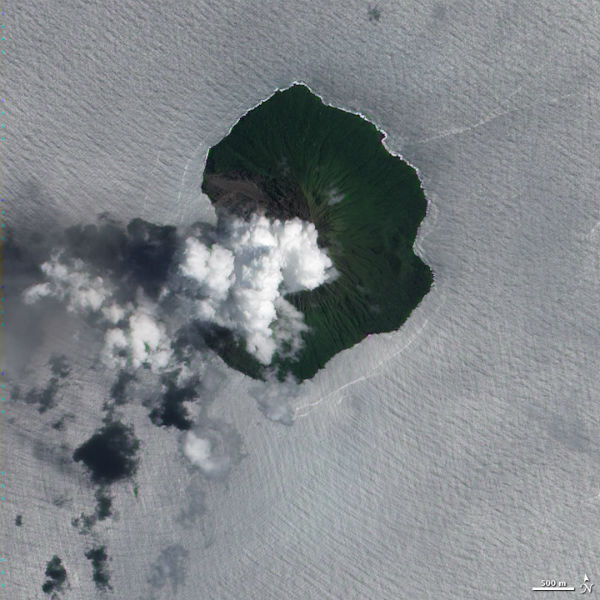 The island of Tinakula is uninhabited. A previous population was eradicated when the volcano erupted around 1840 and pyroclastic flows swept all sides of the island. In 1951, Polynesians from Nukapu and Nupani settled on the island, which reached a peak population of 130, before it had to be evacuated with the 1971 eruption. The village of Temateneni was on the southeast coast. In the late 1980s, two families (less than 10 people) from Nupani made another attempt at settlement. The island is covered with jungle, except for the western side, which is covered with ash. It was scraped by landslides in 1965. When the volcano erupts, it is possible to watch large boulders tumbling down the mountain side.