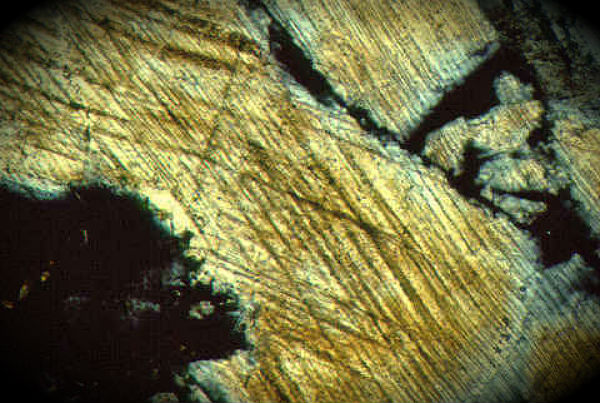 Manson residents are struggling to locate a site for the town’s well due to the geological impact of the meteorite. The remains of a 2.4 km-wide (1.5 mile), 10 billion-ton meteorite are causing problems for a Manson, small Iowa town in US, after it crashed onto the Earth’s surface at speed of 72 500 km/h (45 000 miles per hour) 74 million years ago. When the meteor hit, the Earth burped up rocks from as deep as 8 km (5 miles) below the surface. The impact location is now the underground Manson Crater with a diameter of 38.6 km (24 miles) which extends through four counties.

The city’s current pair of wells were built in 1905 and 1921. The water level in the wells has dropped in recent years. Engineers at Iowa’s Department of Natural Resources are struggling for years in order to find a sustainable water source.  It has been exceedingly difficult to find a spot where pumps are able to bring up enough water. They speculate that the crater’s center is home to Iowa’s softest water source so they plan to drill for water near the crater’s center. Typically, a crater’s center is the most productive place to sink a well. The outer rings are dicey, and the rest not even worth a try. Drilling a single residential well is not a problem for most homeowners, but even then the water is likely to be hard and polluted with nitrates. Going 1,000 feet below the surface to tap a quality aquifer capable of supplying an entire town presents a bigger challenge.

Crews went out and drilled a well in November on the edge of town but they weren’t able to get enough water out off it.

The Manson Crater meteorite is one of the largest outer space collision sites in North America and it  was long-thought to have been the cause of the dinosaurs extinction, until scientists determined that it was too old. It is believed that the impact resulted in an electromagnetic blast that incinerated anything within 209 km (130 mile)s and wiped out all life within 1046 km (650 miles) of the blast. It  is estimated to have been about 14,5 km (9 miles) in diameter. According to an article published 2010 in the journal Science, that impact was the equivalent of 1,000,000 Hiroshima nuclear bombs, creating tsunamis and earthquakes measuring more than 10 on the Richter scale. At these scale, anything that could burn within 210 km (130 miles) of the impact went up in flames. Animals that once roamed a region between what is now Detroit to Denver were likely killed. Trees were toppled from Minneapolis to St. Louis.

The discovery of a crater five times larger than Manson crater in the Yucatan peninsula of Mexico, suggest that it could be an impact location caused by a meteorite that probably wiped out dinosaurs. The dinosaurs disappeared about 65 million years ago and some scientists believe a later meter strike, perhaps that one in Mexico, caused the extinction. 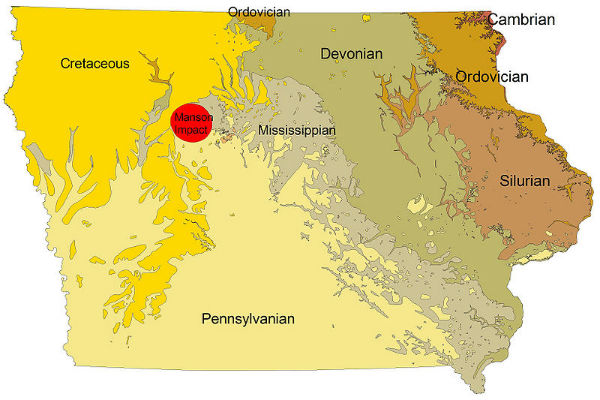 74 million years ago, near the end of the Cretaceous Period, central Iowa lay near the shoreline of an inland seaway that separated eastern North America from rapidly rising mountains to the west.  The low-lying Iowa landscape was home to a rich and varied population of plants and animals, including dinosaurs and small mammals. These organisms lived in a fern-rich, mixed conifer and deciduous forest with a warm, moist climate much like today’s Gulf Coast.  The environment dramatically changed when a stony meteorite, over one mile in diameter, weighing about 10 billion tons and traveling about 45,000 miles per hour, blasted through the atmosphere and crashed to earth.

In the fraction of a second that it took the meteorite to penetrate about one mile into the ground, the shock wave created by the initial contact with the surface reached the back side of the meteorite and its potential energy was transformed to kinetic energy, the equivalent of about 10 trillion tons of TNT.  An electromagnetic pulse moved away from the point of impact at nearly the speed of light, and instantly ignited anything that would burn within approximately 210 km (130 miles) of the impact.  The shock wave toppled trees up to 483 km (300 miles) away (Chicago, Minneapolis, and St. Louis), and probably killed most animals within about 1046 km (650 miles) (Detroit  and Denver).  The blast left a crater over 38.6 (24 miles) in diameter centered in an area of unimaginable death and destruction. Today there is no land surface expression of the crater that exists 30-100 km (100 to 300 feet) below the town of Manson (Calhoun County), which lies near the center of the crater that bears its name. 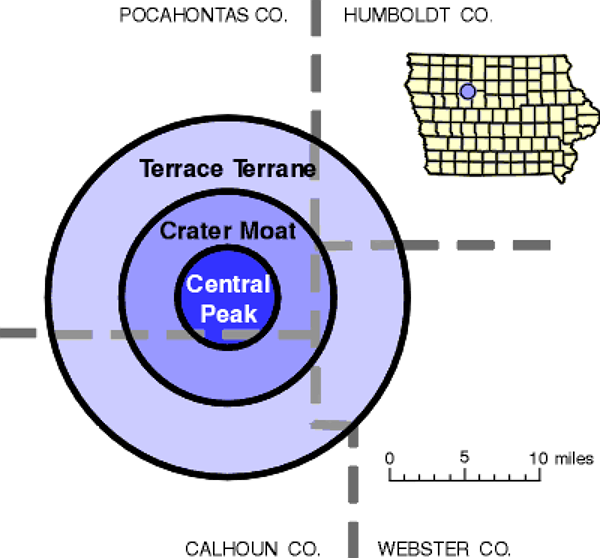 The area of the Manson Impact Structure has been known as a geologic anomaly since the early 1900s.  At that time a new water well for the town of Manson encountered an unusual sequence of rocks that yielded the only naturally soft groundwater known in Iowa.  The first investigation of the anomaly, in 1955, consisted of drilling two research cores and studying rock samples collected during water well drilling in the area.  Since meteorite impact craters were almost unknown at that time, the feature was interpreted as a “cryptovolcanic structure,” a crater produced by a giant explosion of volcanic gases.  The meteorite impact origin for the structure was first proposed by Robert Dietz in 1959 and confirmed in 1966 by Nicholas Short, who published photographs of “parallel deformation features” in quartz grains, including specimens from the Manson Structure.  Short concluded that these features constituted incontrovertible evidence of a meteorite impact origin.  The so-called “shocked quartz grains” (see photo, below) are produced when a high-energy shock wave generated by an impact passes through a quartz grain, creating thin regularly spaced zones of melting along preferred crystallographic planes.  Extraterrestrial impacts are the only known natural force with sufficient energy to create these features. 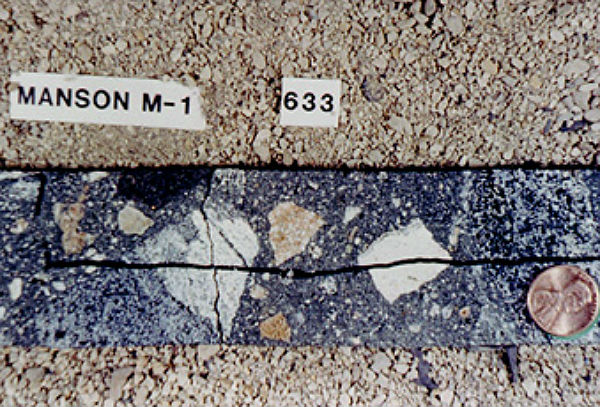 In 1991 and 1992 the Geological Survey Bureau and U.S. Geological Survey began to investigate the possibility that the Manson impact played a role in the extinction of the dinosaurs and other species at the end of the Cretaceous Period, 65 million years ago.   During the course of this investigation 12 research cores, totaling over 4,000 feet, were obtained from all terranes of the crater.  Study of those cores and other data by scientists throughout the United States and from several other countries produced an understanding of the processes involved in the formation of the Manson Structure.   This investigation identified the Manson Structure as a “complex” impact crater; that is, it includes an outermost “Terrace Terrane” of down-dropped blocks, an inner “Central Peak,” and a “Crater Moat” in between (see diagram, below).

The shallow seaway retreated from the region of the Manson Structure within a few million years following the impact, exposing the area to erosion.  Over the next 70 million years about 1,000 feet of rock layers were removed from the region by erosion, including all impact rocks beyond the crater.  However, with its thick cover of Phanerozoic Clast Breccia for protection, only small areas on the Central Peak and Terrace Terrane were eroded.  During the last 2.5 million years, continental glaciers covered the Manson area repeatedly.  These glaciers further eroded the impact feature before blanketing it with glacial sediments that cover it from view today. (Source: Iowa Geological & Water Survey – Adapted from Iowa Geology 1999, Iowa Department of Natural Resources)

List of visible crater sites, in the United States

Featured image: A microscopic view through a thin-section of rock from the Manson Crater’s Central Peak is shown.  Lines in the brownish quartz grains are impact-derived “parallel deformation features.” Such features are found at meteor impact sites around the world and are considered irrefutable evidence of extraterrestrial impacts.  Horizontal field-of-view is 3 mm. (Credit: Ray Anderson)