– A ball of light in the sky resembling a meteor was reported Sunday night by several people in Miami-Dade and Broward counties (US) on February 18, 2013. "Looking over the Biscayne Bay from downtown, I saw an object falling from the sky," said Brad Greenberg, 30, of Miami in a tweet about 6:30 p.m. "At first, the object was faintly glowing and moving fast but not nearly as fast as a shooting star."

– TW reader from Australia, February 18, 2013: I videoed what I feel may have been a meteorite over Melbourne, Australia – preceding the arrival (by hours) of the asteroid. The video is on my blog and Youtube. I also feel there may be more to come – will wait and see….. Link: http://sentirlaterre.blogspot.com.au/2013/02/2013-asteroids-meteroites-and.html

– TW reader from Timor, February 17, 2013: Today evening I was sitting in a car and for millisecounds I saw a ultra speed bright light in the sky….btw my position is east Timor . I believe more will come.

– TW reader from Australia, February 16, 2013:  TA meteor was seen in Melton, Victoria, Australia. Between 11pm and 12am on  February 16, 2013. Approximate direction from E by NE to W by SW. Looked like clump of 4 stars at the head with a clearly visible tail. Occupied up to third of the field of vision of the two observers and lasted multiple seconds in view. Enough time to talk to each other about it as it was passing.

– A fireball was also reported in United States. witnesses reported a fireball of some sort was seen streaking across the Bay Area skies, San Francisco. The fireball was seen around 12:45 UTC, on February 16, 2013.

Another video of San Francisco fireball is here: https://www.youtube.com/watch?v=HLpTOc1i8_8&feature=youtu.be

– Russian exploding fireball was covered in-depth and most people only heard about that one. First reports came early February 15, 2013 at about 01:00 UTC. During the morning hours Russian military discovered a 6-meter crater, normal background radiation was reported. Russian Academy of Science said the meteorite weighed 10 tons before it entered Earth’s atmosphere but some reports mentioned 50 tons.  The meteorite exploded nine times, starting at an altitude of 55 kilometers. The Russia meteor is the largest reported since 1908, when a meteor hit Tunguska, Siberia. The meteor entered the atmosphere at about 40,000 mph (18 kilometers per second). The impact time was 7:20:26 p.m. PST, or 10:20:26 p.m. EST on Feb. 14 (3:20:26 UTC on Feb. 15), and the energy released by the impact was in the hundreds of kilotons. Based on the duration of the event, it was a very shallow entry. It was larger than the meteor over Indonesia on Oct. 8, 2009. Measurements are still coming in, and a more precise measure of the energy may be available later. The size of the object before hitting the atmosphere was about 49 feet (15 meters) and had a mass of about 7,000 tons. The meteor, which was about one-third the diameter of asteroid 2012 DA14, was brighter than the sun. Its trail was visible for about 30 seconds, so it was a grazing impact through the atmosphere.

– Late afternoon UTC time on February 15, 2013 people from Cuba apparently witnessed another bright fireball explode over the town in the province of Cienfuegos. More details here and here.

– Exploding fireball was also reported over the sky of Japan on February 14, 2013 and was captured on video:

– An enormous fireball was reported by numerous witnesses over Belgium, Netherlands and Germany on February 13, 2013. The sight lasted from 10 – 20 seconds. There were two separate fragmentations that shone brightly, one witness reported. Apparently it was part of Soyuz rocked. The 1800th flight of a Soyuz launch vehicle was performed on Monday, 11 February 2013 from the Baikonur Cosmodrome in Kazakhstan at 18:41 Moscow time (15:41 Paris time). Arianespace and its Russian partners report that the Progress cargo spacecraft was accurately placed on the target orbit for another mission to the International Space Station. This was the second Soyuz family mission in 2013.  Detailed witness reports here. 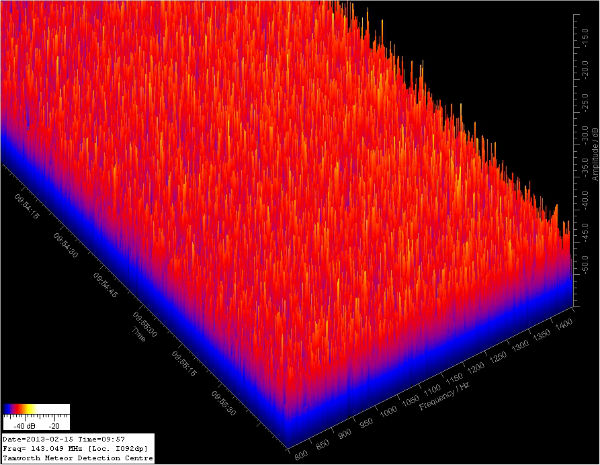 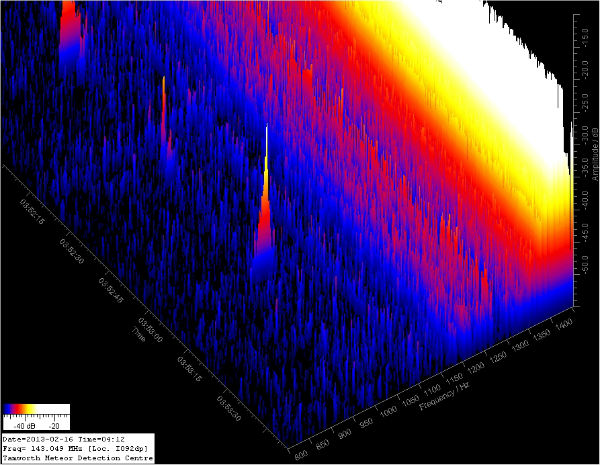 NASA statement on Russian meteor:
"According to NASA scientists, the trajectory of the Russian meteorite was significantly different from the trajectory of the asteroid 2012 DA14, making it a completely unrelated object. Information is still being collected about the Russian meteorite and analysis is preliminary at this point. In videos of the meteor, it is seen to pass from left to right in front of the rising sun, which means it was traveling from north to south. Asteroid DA14's trajectory is in the opposite direction, from south to north."

α–Centaurids meteor shower last from January 28 until February 21. The α-Centaurids are one of the main southern summer high points, from past records supposedly producing many very bright, even ﬁreball-class, objects (meteors of at least magnitude −3), commonly with ﬁne persistent trains. However, the average peak ZHR between 1988–2007 was merely 6 (HMO, p. 130), albeit coverage has frequently been extremely patchy. Despite this, in 1974 and 1980, bursts of only a few hours’ duration apparently yielded ZHRs closer to 20–30.