The American Meteor Society received over 600 reports of bright meteor that lit up the sky over eastern US and parts of Canada on Friday, March 22, 2013.  Reports of this meteor, bright enough to be called fireball, started coming in around 8 pm EDT (midnight UTC). It was witnessed in at least 13 US states and two Canadian provinces.

Based on reports by AMS the fireball was moving east from eastern Pennsylvania and across New Jersey, passing just south of New York City and then over the Atlantic Ocean. So far, no damage was reported.

NASA's Bill Cook said the flash appeared to be "a single meteor event." He estimated that the meteor was one yard in diameter (91 cm) when it entered the atmosphere over eastern Pennsylvania.

Derrick Pitts, chief astronomer at Philadelphia's Franklin Institute, said that the sightings had all the hallmarks of a fireball, it lasted 7-10 seconds, was bright and colorful crossing much of the sky with a long stream behind it. 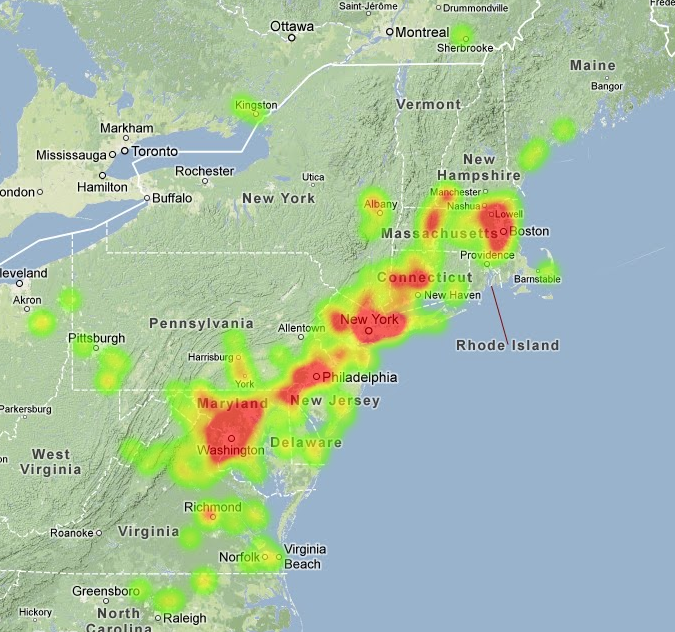 Robert Lunsford (AMS) explained why meteors often appear much closer than they really are:

There is often a common misconception that the object appeared nearby when in fact the actual flight path was several hundred miles away and was witnessed over several states. It is your perspective that makes meteors appear to strike the horizon when in fact they are still high in the atmosphere. This is much like a jetliner seen low in your sky. It appears low to you but for someone located many miles away in that direction, the jetliner is passing high overhead. Meteors become visible at approximately 50 miles above the Earth’s surface. Friction slows these objects down until they fall below the velocity necessary to produce light. At this point they still lie at least 5 miles high in the sky. They are invisible below this altitude and cannot be seen as they basically free falling to the ground at 200mph. Very few meteors actually reach the ground as 99.99% completely disintegrate while still 10-20 miles up in the atmosphere. (AMS)

This footage was captured by security cameras at Hopkins Automotive in Salisbury, Md. and has not been confirmed though it plausibly depicts the meteor.