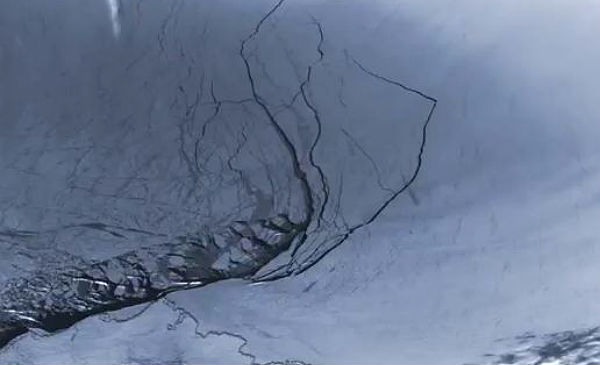 A series of intense storms in the Arctic has caused fracturing of the sea ice around the Beaufort Sea along the northern coasts of Alaska and Canada. High-resolution imagery from the Suomi NPP satellite shows the evolution of the cracks forming in the ice, called leads, from February 17 – March 18, 2013. The general circulation of the area is seen moving the ice westward along the Alaskan coast.

The NOAA VisLab used the imagery from NOAA‘s weather and climate satellites to produce animations that show the dynamic nature of Earth and its environment. This time NOAA’s Visualization Lab released animation showing Arctic ice  breaks up in Beaufort Sea.


The rapid melt north of Alaska is part of a larger phenomenon. Sea ice across the entire Arctic reached record-low levels last year. High-pressure pattern over the region kept skies clear at the very time of year when sunlight lasts the longest. In addition, larger-scale climate patterns in early June 2012 favored ice retreat along the coastlines of Alaska and Siberia.

The early onset of the spring melt and the sunny skies around the solstice increased the likelihood of heightened melt rates throughout the rest of the summer, largely by reducing albedo: the proportion of solar energy reflected back into space. If an object reflects all the energy it receives, it has an albedo of 1.0. Sea ice has high albedo because of its bright appearance. But when it starts to melt, its albedo drops from roughly 0.9 to 0.7, causing the ice to absorb more energy. Increased energy absorption leads to increased melt, which exposes ocean water. Thanks to its dark appearance, ocean water has an albedo of less than 0.1. Long, sunny days pour energy into the water, and it retains the heat throughout the summer. In September, when the Sun is low on the horizon, the heated ocean water continues melting sea ice.