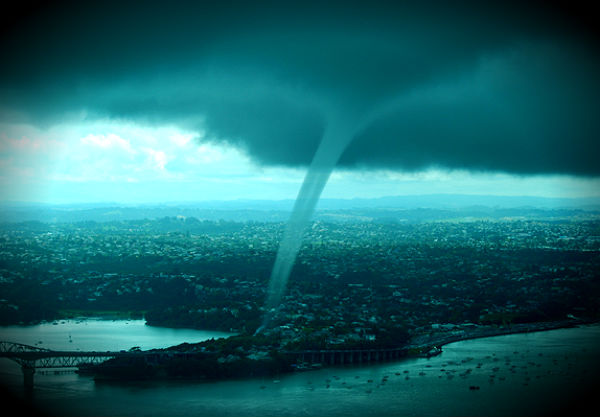 A large water funnel resembling a tornado has been spotted in Auckland’s Hauraki Gulf yesterday. The thin, tornado-like funnel apparently caused no significant harm as it swirled near the Auckland central business district at about 4 p.m., local time, or late Tuesday evening, EST, the New Zealand Herald reports. The waterspout moved along the harbour past the central business district before growing weaker and drifting into thick cloud over the city.

Waterspouts are generally fairly safe to watch from land but should it move towards land people should immediately take cover indoors away from windows. Big cloud build ups can create wild air currents and in turn they can create localised funnel clouds – which can lead to small waterspouts over water or small tornadoes over land. It’s common to get waterspouts in New Zealand but certainly rare to see such a clearly defined one right in the CBD of Auckland Harbour. 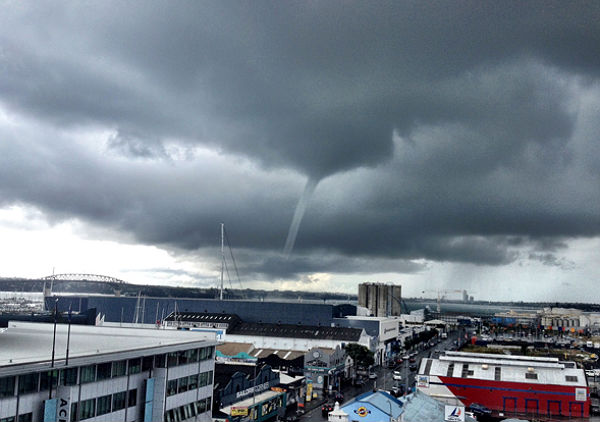 The weather map shows weak low pressure over Auckland and northern New Zealand. Weather at the time was moderately warm and humid, typical for summer in Auckland, with a number of showers in the area. Worldwide, these conditions do sometimes breed waterspouts over larger bodies of water. Ordinary waterspouts differ from their far more dangerous kin, tornadoes, in that their size is much smaller and they lack the powerful parent “supercell” thunderstorm. However, even a powerful supercell tornado can be called a waterspout while over water.

* In May last year a tornado struck Auckland’s North Shore, killing Benedict Dacayan, 37.
* In August 2004, Rosina Dawn Wikohika, 55, of Levin and her grandson Gary Mason, 10, were killed with a tornado struck the Taranaki town of Motunui, north of Waitara.
* On August 25, 1948, a major tornado hit the Hamilton suburb of Frankton, killing three people and damaging or destroying dozens of houses.