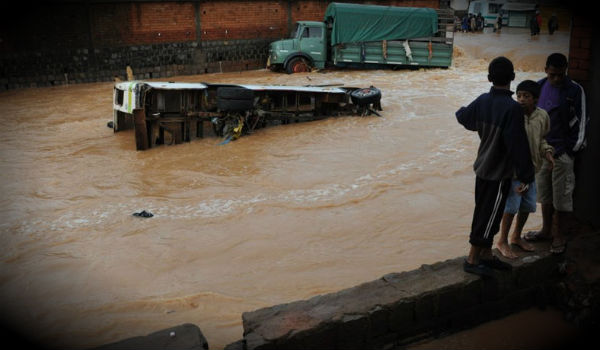 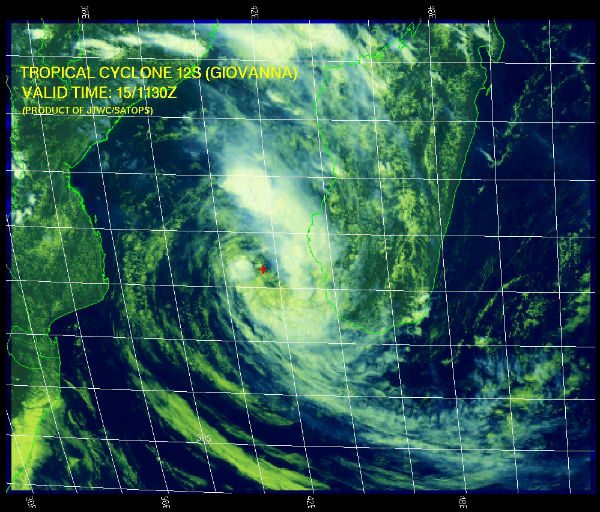 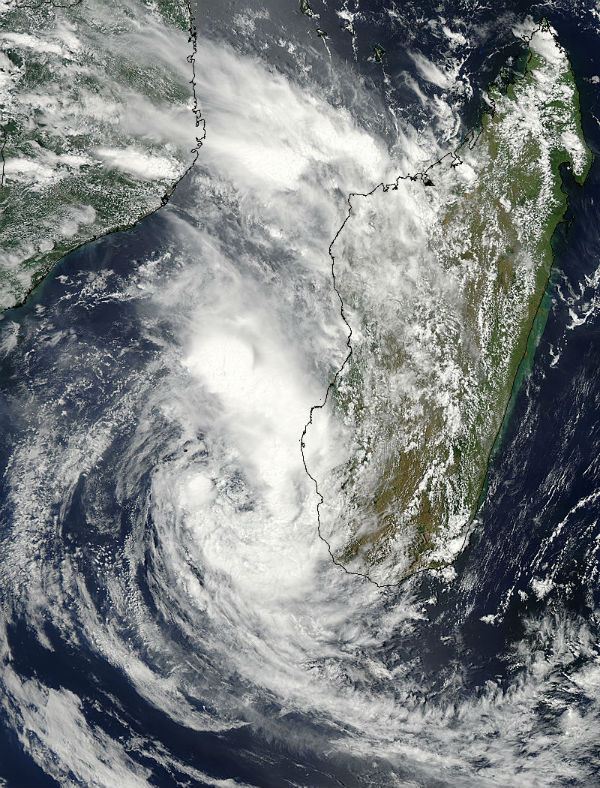 As of Wednesday, Tropical Cyclone Giovanna turn into only a moderate tropical storm after plowing westward over the Madagascar and is now located over the Mozambique Channel.

Tropical cyclone Giovanna is now located 405 nm southwest from Antananarivo and is moving southwestward with speed of 12 knots according to latest Joint Typhoon Warning Center (JTWC) warning bulletin. Animated multispectral satellite imagery (MSI) reveals the low level circulation center (LLCC) became displaced from the deep convection while crossing Madagascar due to the lee-side jump phenomenon. Now that Giovanna is tracking over the open water of Mozambique channel, the tightly curved spiral banding is consolidating and the system is regenerating. 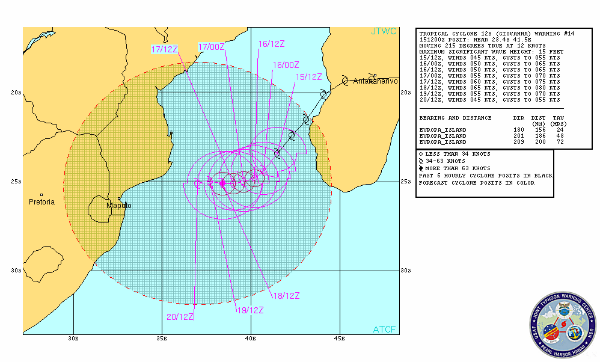 Given the enviromental conditions, the intensity is expected to steadily increase over the next 72 hours to a peak of 65 knots, after which system should weaken slowly according to JTWC. 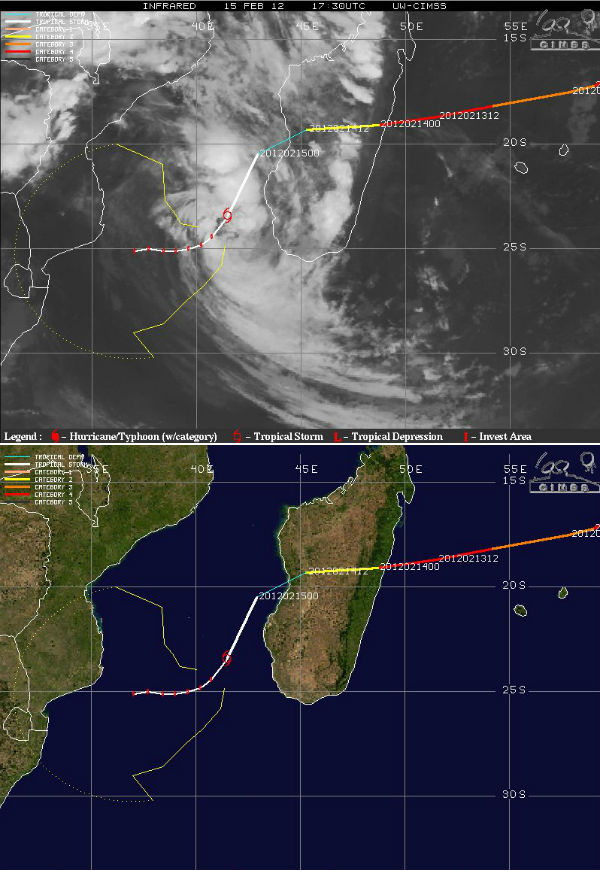 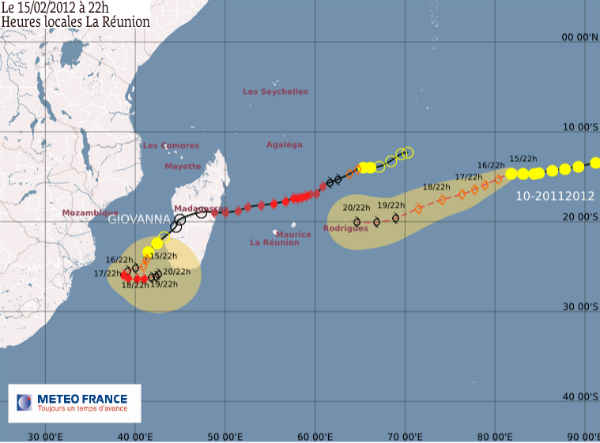 The Madagascar Tribune reports that the cyclone struck Madagascar about one o’clock in the morning with wind gusts of up to 250 kmh. The system then passed near Moramanga. It arrived around 6 am to Andramasina (about thirty kilometers south of Antananarivo), before going on Soavinandriana Itasy then infléchissait her way to the Southwest to Miandrivazo out at sea for up to Belo Tsiribihina to 17.30. At that time, Giovanna had lost much of its force and had been pushed to moderate tropical storm status.

There were reports of landslides in Moramanga. The firefighters of Antananarivo were reported two drownings: that of a child aged one year and a half Saropody Androndrakely, and a person caught in Sabotsy Namehana by the rupture of two banks of the river Imamba. The sudden collapse of  two dams caused the rapid flooding of areas of rice paddies and a large number of surrounding dwellings. Dozens of people were squeezed on the roofs of their homes.

The northern part of the suburbs of Antananarivo became isolated from the capital. Photos bellow were taken in the late afternoon of Feb.14th and published in today’s edition of Madagascar Tribune. 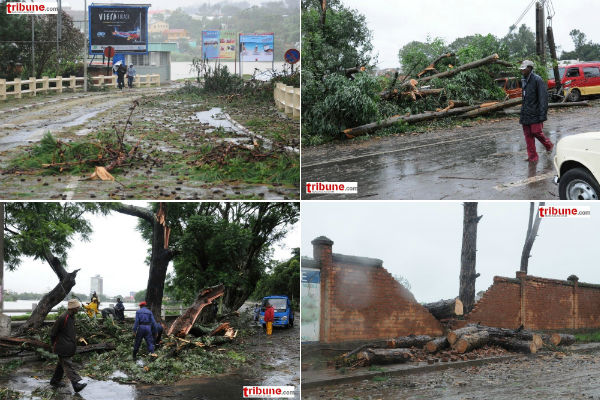 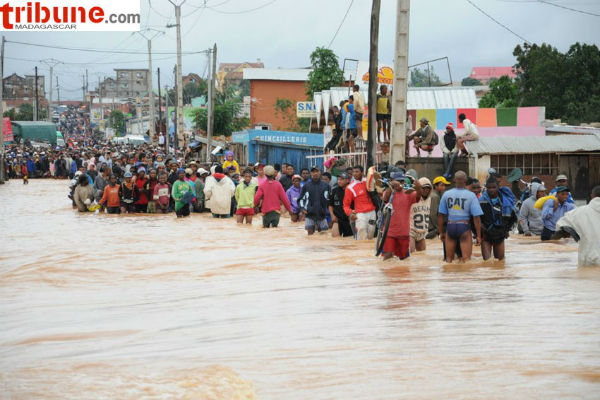 In material terms, the greatest damage seems concentrated in the cities of Brickaville, Vatomandry, Mahanoro, Moramanga and still on the agglomeration of Antananarivo. In the city center, many roads were cut off in the morning, victims of falling trees or utility poles or landslides. This was particularly the case in Anosy to Ambohijatovo and Ampahibe. Economic life was completely paralyzed, the announced closure of all offices and schools have been made yesterday. Many roads around Antananarivo were also cut.

There were indications that most homes in Vatomandry, a town of about 40,000, were damaged or destroyed. Traditional structures are not built to withstand the direct blow of a cyclone such as Giovanna.

Youtube user Musungodosvideos uploaded  an excellent timelapse video of a storm blowing in over Maputo, the capital city of Mozambique.