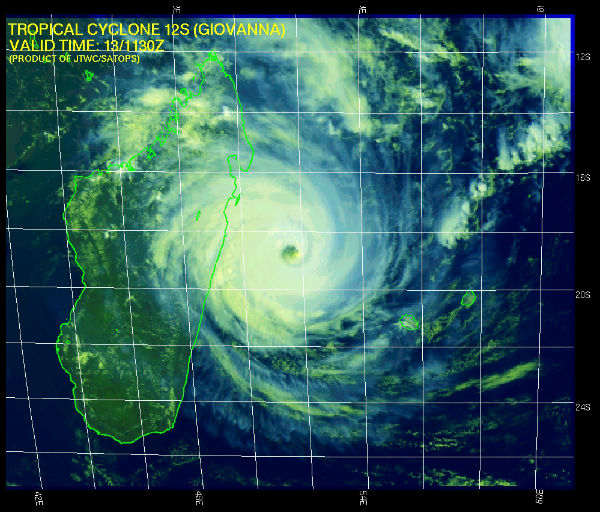 A category four tropical storm, Cyclone Giovanna, is expected to make landfall within hours close to the Madagascan east coast town of Toamasina and thereafter head for the capital Antananarivo. Devastating winds, rain and storm tide of TC Giovanna will be brought to bear on eastern Madagascar in matter of hours. On Monday morning, the eye of Tropical Cyclone Giovanna was located within 150 miles east-southeast of Toamasina, Madagascar. The storm is headed towards the west with winds at approx 125 knots (231 kmh, 143 mph). Maximum significant wave height is 8,5 meters (28 feet) according to Joint Typhoon warning Center (JTWC). 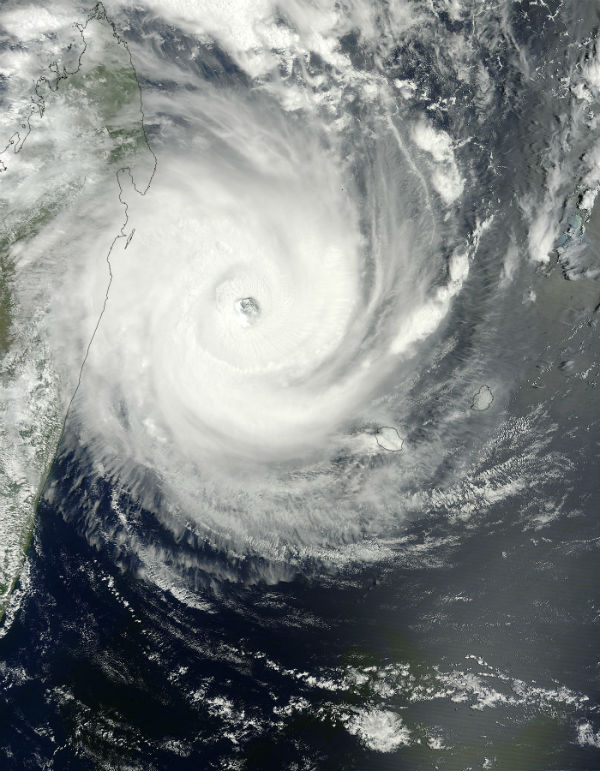 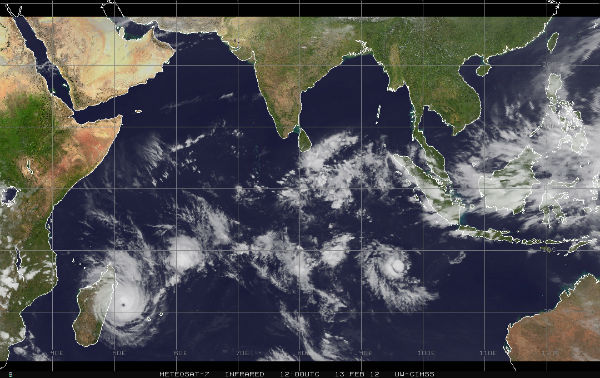 On Sunday night top winds of Giovanna was 125 knots, according to the Joint Typhoon Warning Center (JTWC). Thus, Giovanna’s intensity was akin to that of a Category 4 hurricane. The JTWC forecast was for Category 4 status to be sustained as the eye of Giovanna nears landfall later tonight.

Tropical Cyclone Center of La Reunion reported that the landfall is expected with a 80km radius from Andovoranto. Weather conditions are expected to worsen rapidly within the next hours between Sainte-Marie Island and Mananjary with intensifying rains progressing inland this night. Winds will increase, mainly over the coast within a 150km radius from landfall where gusts should exceed 100kmh. Gusts should exceed 180km/h within a 70km radius, mainly south from landfall area. Storm surge between 2,5 and 3,0 meters are expected south from landfall area. More forecasts and analysis can be find at AccuWeather blog with maps of previous cyclone tracks. 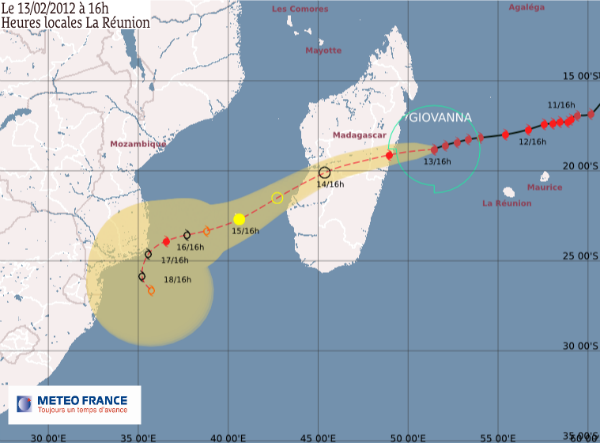 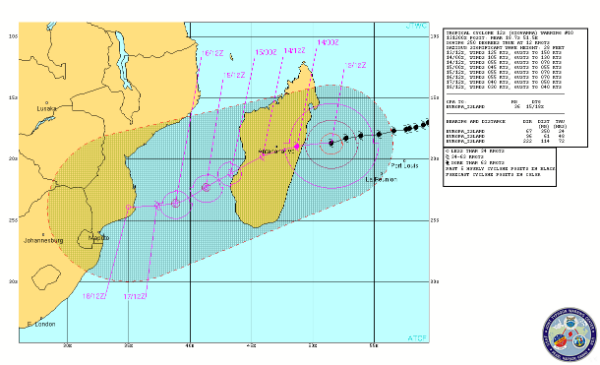 Life and property will be at great risk in and near the direct path of this dangerous storm. Flooding rain, having potential to amount to 10 to 20 inches, will reach inland to the island nation’s spine of highlands. The torrential rain could trigger landslides. The initial area of impact is expected to be between the northeast district of Fenerive Est and the southeast district of Vohipeno. Giovanna currently has a diameter of 400km, which can increase to 500km as it approaches the coast. The two regions likely to be most affected are Antsinanana and Analanjirofo according to OCHA officials.

TC Giovanna should be back over waters of the Mozambique channel Wednesday within a favourable atmospheric enviroment with a decreasing easterly shear as the system will move closer to an upper level ridge. Later in the weak, Giovanna could reach the shores of southern Mozambique as a named tropical cyclone.

A briefing note by the UN Office for the Coordination of Humanitarian Affairs (OCHA) said Giovanna was expected to bring “heavy rain and winds of between 211 and 250km/h. It is forecast to then cross the island and pass by the capital Antananarivo as a category three tropical cyclone and then enter the Mozambique Channel as a category one tropical cyclone by Wednesday 15 February. 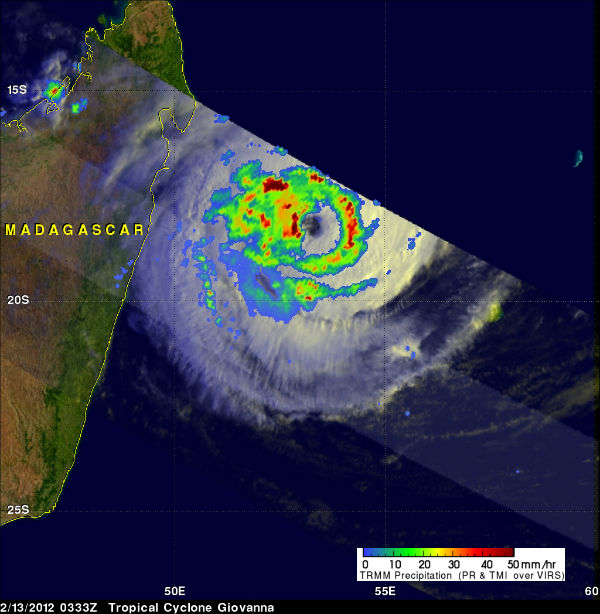 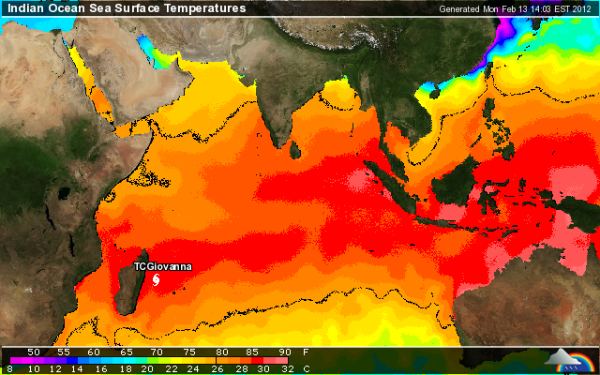 Madagascar experienced four Category 3 storms more than 10 years ago. The most recent was Ivan in 2008, which hit area far north of this week’s expected impact. Ivan destroyed over 90% of the infastructure. On mainland Madagascar, over 400,000 acres of crops were destroyed. In all, over 330,000 people were left homeless, and the storm caused 93 deaths.

Giovanna is being compared by the Malagasy Meteorological Service to the 1994 Cyclone Geralda, because it was expected to follow a similar trajectory through densely populated areas. Geralda killed about 200 people, displaced 40,000 and affected another 500,000.  Geralda destroyed 80% of the city’s seaport Toamasina. Lines of communications, railways, roads and bridges were brought down by the extreme force of the storm.

If, Giovanna makes landfall as a Category 4 storm, damage will exceed either Ivan or Geralda, depending on how populous the area is where it hits. So we can expect massive damage, flooding and reports of dozens, even hundreds, of deaths later this week. We pray that this scenario will not happen. It is very important for residents of threaten area to take this storm very serious and take all meassures that could provide them safety.

The cyclone is expected to arrive on the first anniversary of Cyclone Bingiza which killed at least 14 people, destroyed nearly 6,000 homes and displaced 19,000.