The New South-East Crater of Mount Etna has produced a 20th paroxysmal eruptive episode in the early hours of February 9, 2012 after more than 12 days of moderate strombolian activity. This is 2nd paroxysmal event in 2012. This event was less energetic than the previous ones, but it lasted more than 5 hours according to INGV Sezione di Catania’s latest volcanic report. The eruption was one of the most intense and longest in the series. The intermittend strombolian activity increased during the afternoon of 8 February and reached its peak with tall lava fountains after midnight followed by large lava flows into the Valle del Bove. A tall plume of ash forced the cancellation of most early flights in and out Catania airport which restored later afternoon. 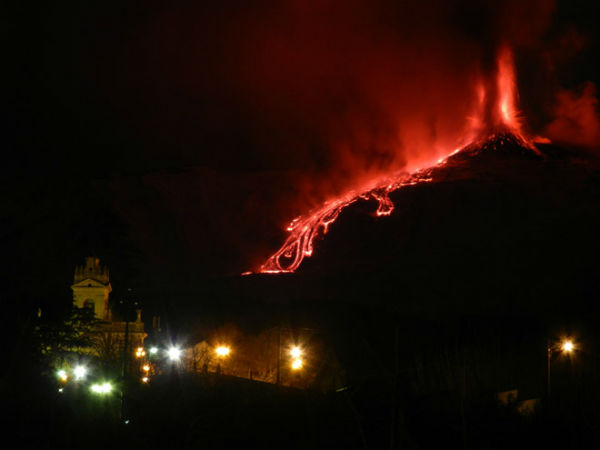 For about 10 days preceding the eruption, the New SE crater had shown sporadic strombolian activity at fluctuating levels. Tremor had been fluctuating with a slightly increasing tendency in accordance.

The onset of the eruption was in the late afternoon of 8 Feb, when strombolian bursts became more frequent, and the tremor signal started to rise gradually. Continuous  strombolian explosions gradually merged into increasing lava fountains, accompanied by a slowly rising volcanic tremor signal. Several vents along the fissure fed the eruptions. By the evening, low but sustained lava fountaining with lava flow had reached the slope break at the western rim of the Valle del Bove and started to descend there, split into at least 2, probably more branches Volcano Discovery reported on its website.

The peak phase of the eruption lasted much longer than previous episodes. It began around 01 am and lasted for about 5 hours until around 6 am near dawn. It produced tall lava fountains reaching an estimated 500 m or more judging from the webcam pictures, and a tall plume of steam and ash rising several kilometers and drifting southwest. 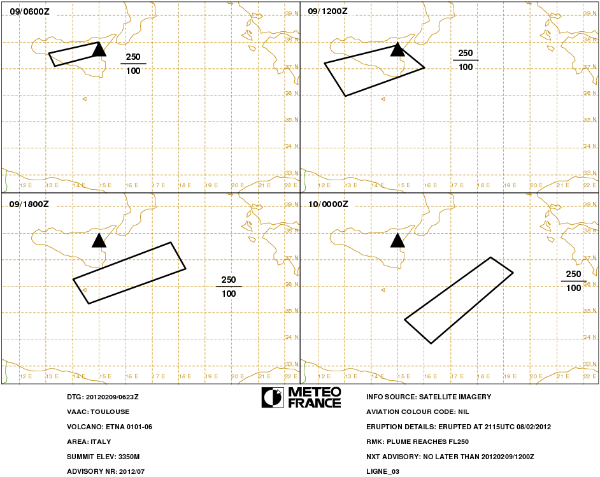 Some explosions threw incandescent lava bombs outside the crater, although most were rather weak and all material fell back into the crater. Video below shows one of the stronger explosions observed on the late evening of 7 February 2012, taken from Trecastagni village on the southeast flank of Etna. The activity continued, sometimes vigorously, sometimes more subdued, through the night and morning of 8 February.

Mount Etna, towering above Catania, Sicily’s second largest city, has one of the world’s longest documented records of historical volcanism, dating back to 1500 BC. Historical lava flows cover much of the surface of this massive basaltic stratovolcano, the highest and most voluminous in Italy. Two styles of eruptive activity typically occur at Etna. Persistent explosive eruptions, sometimes with minor lava emissions, take place from one or more of the three prominent summit craters, the Central Crater, NE Crater, and SE Crater. Flank eruptions, typically with higher effusion rates, occur less frequently and originate from fissures that open progressively downward from near the summit. A period of more intense intermittent explosive eruptions from Etna’s summit craters began in 1995. The active volcano is monitored by the Instituto Nazionale di Geofisica e Volcanologia (INGV) in Catania. (GVP)