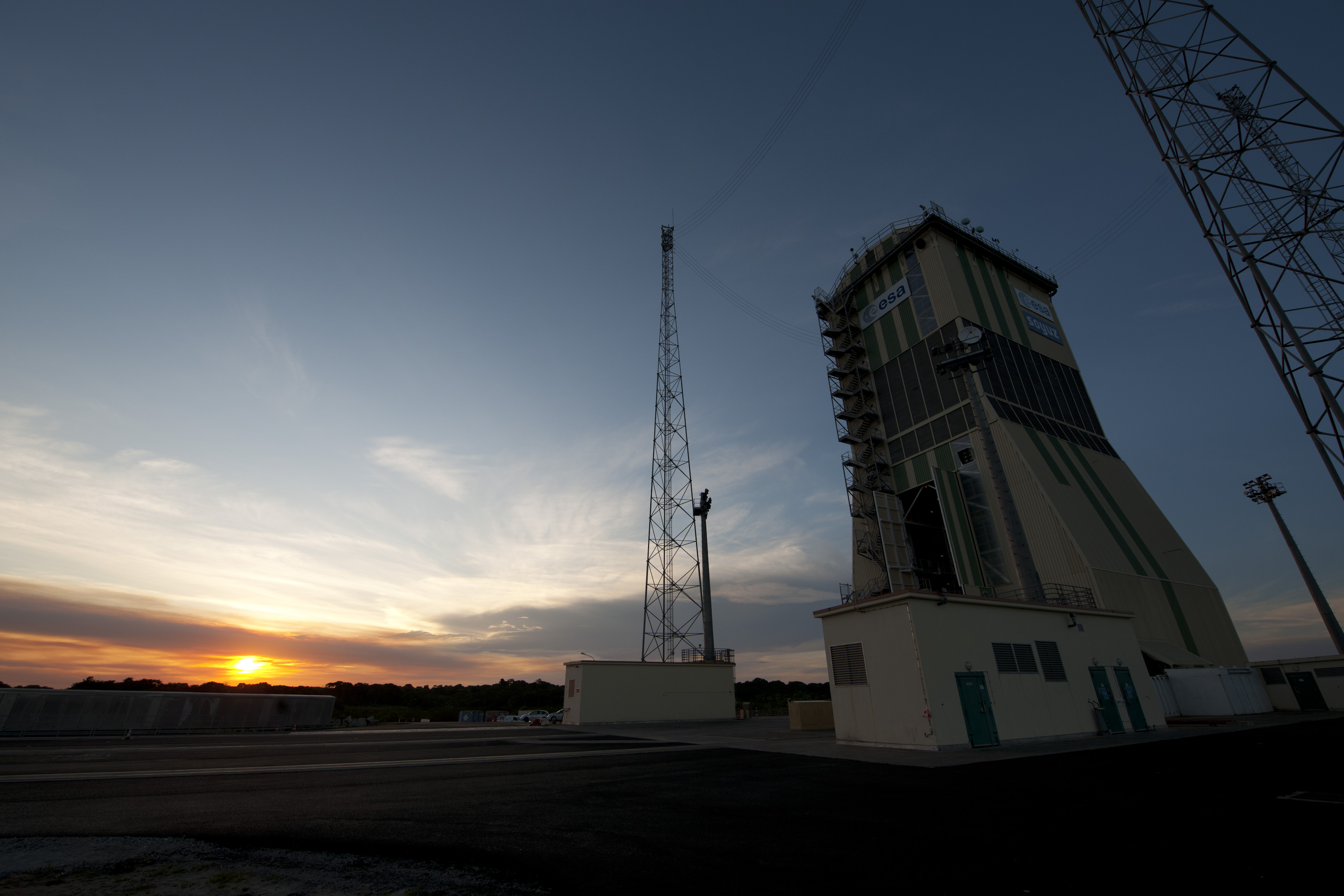 European Space Agency (ESA) announced that this year we will see three very different rockets lift off from Europe’s Spaceport in Kourou, French Guiana: the heavy Ariane 5, the medium Soyuz and the latest addition, the new, small Vega. The launch window for Vega’s inaugural flight opens a week from today, on Thursday, Feb. 9 and stretches for a few days beyond Feb. 9.

The new Vega rocket has been under development for 9 years by ESA and its partners, Italian space agency ASI, French space agency CNES and industry. With a height of 30 m and a diameter of 3 m, it weighs a total of 137 t at liftoff.

Vega will join ESA’s venerable Ariane rocket family and the newly inaugurated Soyuz as the third class of booster rockets to launch from ESA’s rapidly expanding South American Spaceport at the Guiana Space Center. This gives ESA an enormous commercial leap and wide ranging capability to launch all types of satellites from small to big and heavy.

This time-lapse shows the full assembly of the first Vega launcher at the launch pad, in preparation for its qualification flight. It starts with the transfer and installation of the P80 first stage from the Vega Booster Storage and Preparation Building to the launch pad, followed by the two solid-propellant second and third stages, the Zefiro-23 and Zefiro-9. The next step was to add the AVUM – Attitude & Vernier Upper Module – liquid-propellant fourth stage to the vehicle. The ‘upper composite’ – the fairing and payload – was moved to the pad on 24 January and integrated over night.

The main remaining steps to the maiden flight are the final checkout of the assembled vehicle, the full launch countdown rehearsal and the fuelling of the restartable AVUM.

The Vega VV1 qualification flight will carry 9 satellites to orbit: the LARES laser relativity satellite and ALMASat-1 from ASI with seven CubeSats from European Universities. 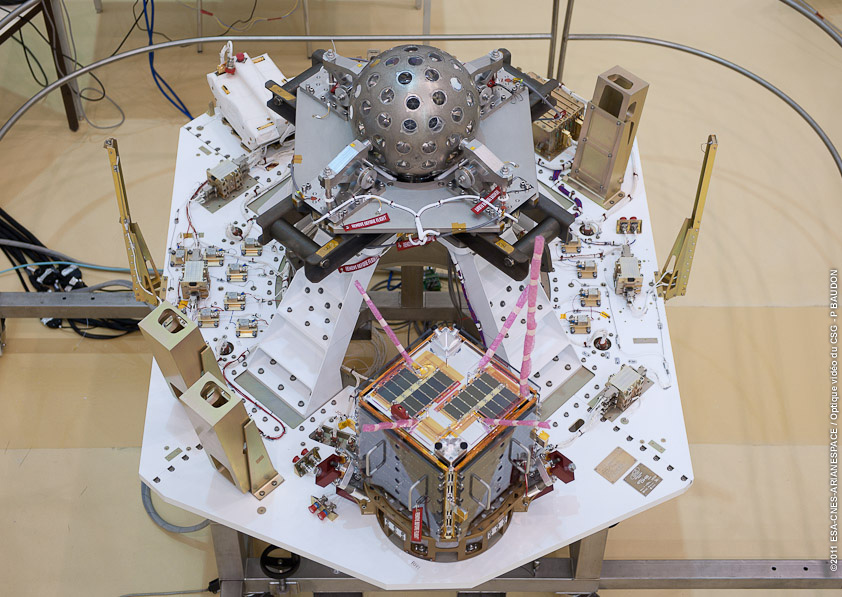 The mission will qualify the overall Vega system, including the vehicle, the ground infrastructure and operations from the launch campaign to the payload separation and disposal of the upper module.

Vega’s AVUM fourth stage will first reach a circular orbit at an altitude of 1450 km and an inclination of 70º above the equator to release LARES. It will then manoeuvre to lower its perigee to 350 km before deploying the other satellites. 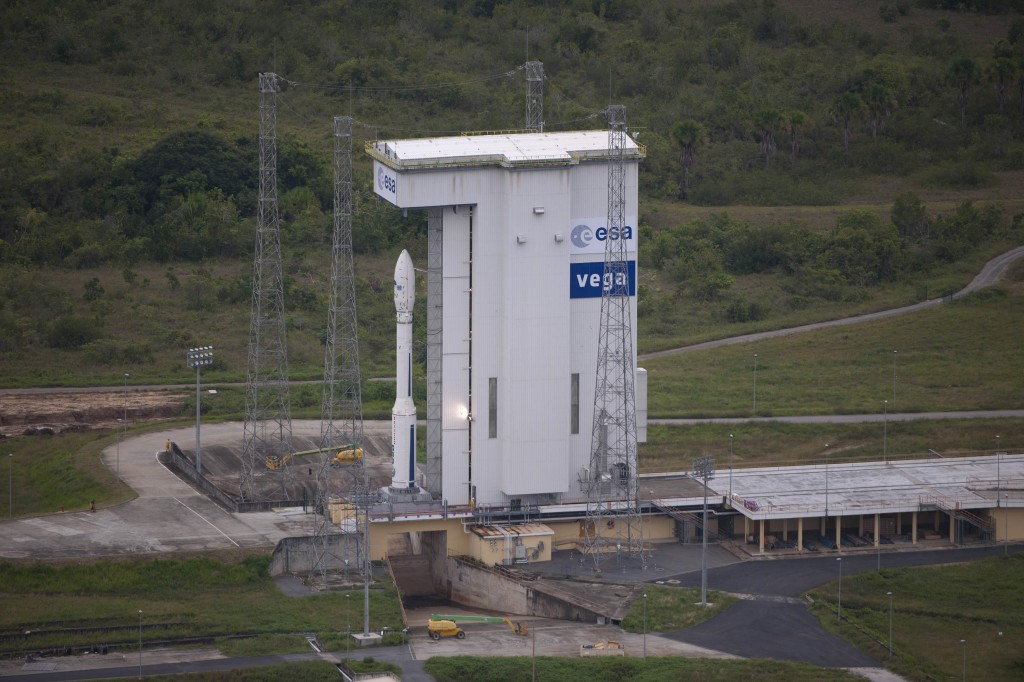 About Vega programme – The mission

The Vega programme has its origins back in the 1990s, when studies in several European countries investigated the possibility of complementing the performance range offered by the Ariane family of launchers with a capability for smaller payloads.

The Vega programme’s main objective is to provide Europe with a safe, reliable and competitive capacity to carry science and Earth observation satellites into orbit, while perfectly complementing the heavy Ariane 5 and medium Soyuz rockets already launched from Europe’s Spaceport in French Guiana.

Vega is designed to cope with a wide range of missions and payload configurations in order to respond to different market opportunities and provide great flexibility. Unlike most small launchers, Vega is able to place multiple payloads into orbit. In particular, it offers configurations able to handle payloads ranging from a single satellite up to one main satellite plus six microsatellites.

It’s compatible with payload masses ranging from 300 kg to 2500 kg, depending on the type and altitude of the orbit required by the customers. The benchmark is for 1500 kg into a 700 km-altitude polar orbit. 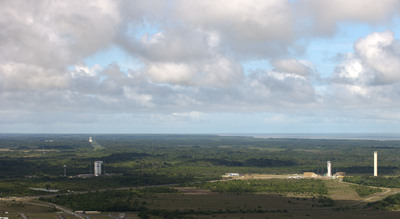 Europe’s Spaceport is situated in the northeast of South America in French Guiana, an overseas department of France.

In 1964 the French Government chose Kourou, from 14 other sites, as a base from which to launch its satellites. When the European Space Agency came into being in 1975, the French Government offered to share its Centre Spatial Guyanais (CSG) with ESA. For its part, ESA approved funding to upgrade the launch facilities at the CSG to prepare the Spaceport for the Ariane launchers under development

Kourou lies at latitude 5°3′, just over 500 km north of the equator. Its nearness to the equator makes it ideally placed for launches into geostationary transfer orbit as few changes have to be made to a satellite’s trajectory.

Launchers also profit from the ‘slingshot’ effect, that is the energy created by the speed of the Earth’s rotation around the axis of the Poles. This increases the speed of a launcher by 460 m per second. These important factors save fuel and money, and prolong the active life of satellites.