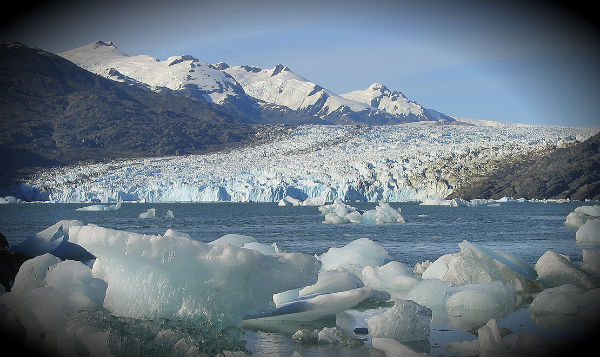 Somebody stole blocks of ice from the Jorge Montt Glacier in southern Chile. Agents with Chile’s National Forest Service (CONAF) claim that ice was being stolen from the glacier, located in the Chilean Patagonia region some 1,700 kilometers (1,056 miles) south of Santiago. Police in the southern city of Cochrane arrested driver of a truck loaded with five tons of ice. .  Cochrane prosecutor Jose Moris said that the driver was arrested on charges of theft but he could also face charges of crimes against cultural heritage. And by the way, Police put the value of the stolen ice at $6,200. We wonder just one thing – how can you calculate a value of stolen ice?

Jorge Montt Glacier is located in the Aisén Region of Chile, south of the town of Caleta Tortel. It lies at the north end of the Southern Patagonian Ice Field, within Bernardo O’Higgins National Park. The mouth of Pascua River is located in the vicinity of the glacier calving front. The withering glacier is part of the 13,000-square-kilometer (5,020 square mile) Southern Ice Field, the third largest frozen landmass after Antarctica and Greenland, shared by Chile and Argentina

On December 7, the Center of Scientific Studies (CECs), based in the southern city of Valdivia, presented its study on Patagonia’s receding Jorge Montt glacier at the Fundación Imagen de Chile in Santiago. New study shows that the 454-square-kilometer (175 sq mi) Jorge Montt glacier is melting at a rate of a kilometer (0.6 miles) per year, making it one of the world’s most visible milestones of global warming. It was presented by glaciologist and CECs researcher Andrés Rivera, who focused his investigation on changes in the glacier between February 2010 and January 2011. Using a series of 1,445 photos taken throughout this period, scientists found that the glacier shrank roughly 82 feet each day, receding more than half a mile in the course of the year. Researchers presented a video in which 1445 time-lapse photos tracked the glacier’s year-long retreat.

Michel Barer, a researcher at McGill University in Montreal who has studied the melting of Peruvian glaciers, calculates that glaciers were losing 1 per cent of their water a year. Neil Glasser, a British glaciologist and one of the authors of the study, agreed that the Jorge Montt Glacier has been shrinking unusually quickly. He points that many glaciers in South America are retreating, but this one is retreating 10 times faster than the land-based glaciers. Jorge Montt’s current rate of recession is abnormally fast, and more studies will be required to determine exactly what and how much effect climate change is having on the glaciers of the Patagonian Ice Fields.