An airborne survey of polar ice, NASA's operation named IceBridge, has recently discovered a big drop in the height of two glaciers in the Antarctic Peninsula and collected a large amount of data on the status of land and sea ice at the end of the Arctic summer melt season, NASA reported on November 24, 2015.

IceBridge has carried out parallel flights across the Arctic and Antarctic for the first time over the last seven year, in order to investigate the impact of the melt season on the Greenland Ice Sheet and nearby sea ice. The gathered data will help in interpreting and calibrating the remote data collected by operational satellites such as the ESA's CryoSat-2 and preparing for the data from NASA's upcoming Ice, Cloud and land Elevation Satellite-2 (ICESat-2).

The Arctic campaign began on September 24, under the name IceBridge North. IceBridge flew three and a half missions per day, carrying 22 flights in total, and conducted three out of the six planned sea ice flights, due to bad weather conditions.

"The main focus of the IceBridge North campaign was to get direct measurements of how much snow and ice has disappeared over the summer. The way you get a direct measurement of this is by surveying the elevation along some flight lines in the spring, doing it again in the early fall, and then comparing the data,"said John Sonntag, IceBridge mission scientist.

"Satellites such as CryoSat-2, and ICESat-2 in the future, take measurements all year round. So we need to sample the poles at different times of the year to get a better handle of the seasonal cycles of the ice. That will help us validate the satellite data and calibrate numerical models that track ice sheet gains and losses," explained Nathan Kurtz, IceBridge’s project scientist and a sea ice researcher with NASA’s Goddard Space Flight Center in Greenbelt, Maryland. 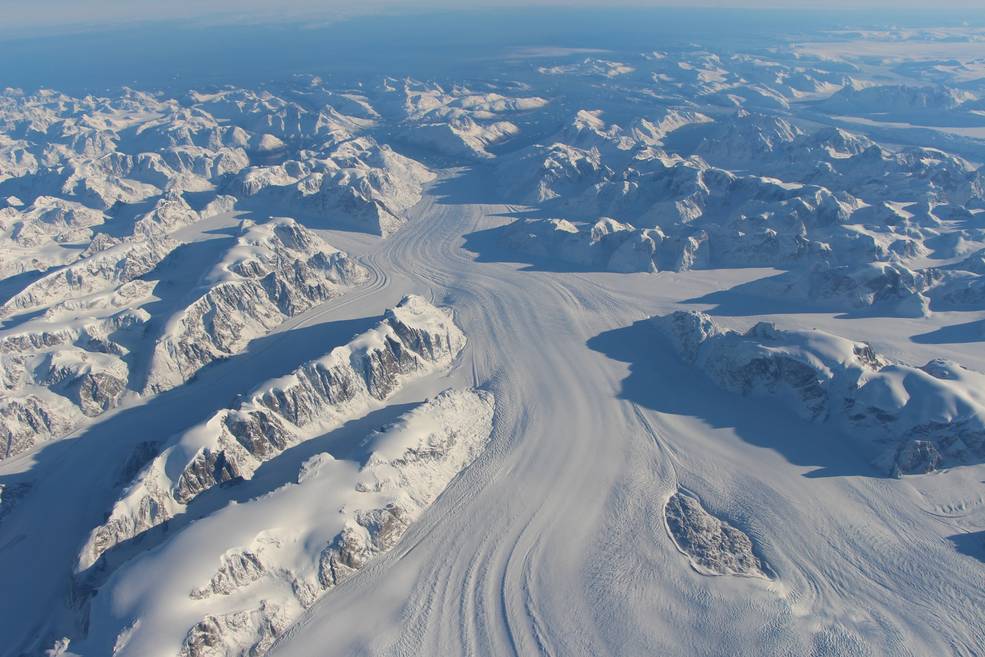 IceBridge's Antarctic campaign, named IceBridge South, began on September 24, as well. In total, it completed 16 research flights, with 172 hours, covering extensive area from Marie Byrd Land to the Antractic Peninsula, including the Pine Island and Thwaites areas, Bellingshausen and Weddell Seas. In total, more than 150 000 square kilometers (58 000 square miles) of land and sea have been surveyed since.

"This is an exciting achievement for the team. The extensive data set we collected from the the G-V over Antarctica will not only provide scientists with information to study changes in sea and land ice that are happening now, but will also create a comprehensive baseline against which future measurements will be compared," said Michelle Hofton, Icebridge and LVIS Mission Scientist at the University of Maryland, College Park.

One of the flights in the Peninsula mapped the drainage area of several glaciers. On the occasion LVIS measured a drop of over 150 meters (490 feet) in the height of two glaciers since 2009. Both of the glaciers have been tributaries to the Larsen B ice shelf which disintegrated in 2002. After the collapse, glaciers elevations have fallen significantly. 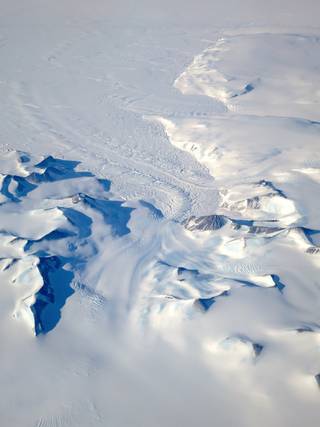 A glacier winds between peaks in the Antarctic Peninsula as seen on Oct. 3, 2015, from the NCAR G-V aircraft during Operation IceBridge's southern campaign. Image credit: NASA/David Rabine

Results of the mission showed that the lower Green and Hektoria glaciers are still losing ice on a fast rate, corroborating the study results from 2012, when average elevation losses of up to 25 meters (82 feet) per year have been estimated.

“Field data suggests that there’s been a modest cooling in the area over the 2009–2015 time period, and images collected during that time by the Moderate Resolution Imaging Spectroradiometer on the Terra and Aqua satellites show more persistent fast ice [sea ice that is attached to the shore] in the Larsen A and Larsen B embayments. These IceBridge measurements show that once the ice shelves collapse, even some cooling and a good deal of persistent sea ice is not able to hold back these larger glaciers and they continue to lose mass overall,” Shuman concluded.

The mission also collected elevation data over Costa Rican rainforests which will be used to calibrate the measurements of NASA's upcoming Global Ecosystem Dynamics Investigation Lidar (GEDI) mission, tasked with measuring the evolution of forests from the International Space Station and due to launch in 2018.

A few Chilean volcanoes, including the recently erupted Calbuco, have been included in the mission, as well. The gathered elevation data will be used to monitor possible eruptions and other natural hazards, and to model the most likely mudflow pathways.