Heavy rainfalls were affecting Doha, Qatar and central and eastern parts of Saudi Arabia throughout November 25, 2015. More than one year of average rainfall was recorded in only 24 hours in Doha and one person was reported dead in Riyadh Region, so far.

Seasonal storms have wreaked havoc across Saudi Arabia in what was reported to be the third deadly flood over the last 4 weeks. The regions of Riyadh and Al-Qassim suffered extensive amounts of rainfall, and 1 person died in the province of Rimah.

Traffic has been blocked across the affected areas and schools were closed throughout the day. Entire vehicles have been submerged under raging flood water across the region. The city of Buraidah in Al-Qassim Region was reportedly hit the hardest. 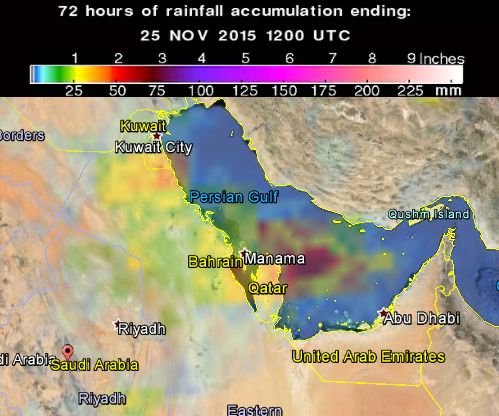 80.8 mm (3.2 inches) of rainfall was recorded at Hamad International Airport in Doha, Qatar, setting the record for the highest precipitation amount ever recorded, according to Qatar Meteorology Department.

Typical November rainfall amount is about 3.3 mm (0.1 inches), while the average yearly amount is about 75 mm (2.9 inches), according to World Meteorological Organization (WMO).This means that, in usual circumstances, this amount of rainfall would fall in Doha during an entire year, or more.​

No victims have been reported in Qatar, so far, and despite extreme weather conditions, flights continued to operate regularly.