Severe rainfall caused the worst flooding in the last 40 years in Addu City, Maldives, on November 26, 2015. Numerous homes sustained serious damage, however, luckily, no victims have been reported so far.

Torrential downpours began on the afternoon (local time) of November 24 and lasted for at least 12 continuous hours. 228 mm (about 9 inches) of precipitation was recorded in the period between November 24 and 25, according to the Maldives Department of Meteorology. Heavy rainfalls that have hit the area have been reported as the worst in the last 40 years. 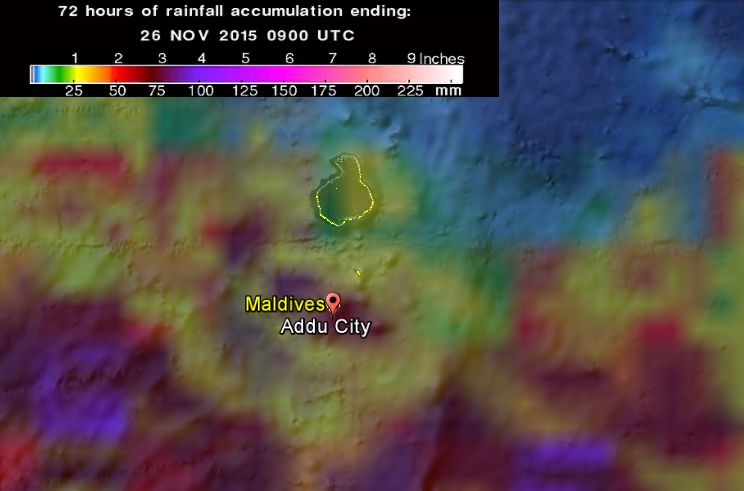 The Addu City was inundated with about 0.3 meters (1 foot) of water, according to Abdulla Thoyyib, the deputy mayor: " This is the worst flooding I’ve seen in decades. The water is knee-deep in most areas, and a majority of houses are under a foot of water."

More than 80 homes have been damaged, and 50 of them suffered extensive amounts of damage. Residents of the area are worried the water contamination might affect the population, as the sewers are full and overflowing and the city is currently out of chlorine. Water pumps have been set by Maldives Defence Forcesto aid in getting rid of flood waters.

Massive flooding in Addu City, our houses submerged in water, and not a single word from the President. pic.twitter.com/vS0kwOMvC2

Department of Meteorology has forecast persistent cloudy weather for Addu City over the next couple of days, however no major rainfall is expected. Maldives can expect above average rainfall throughout November and December due to the active El Niño phenomenon, according to Colombo based Foundation for Environment, Climate and Technology.