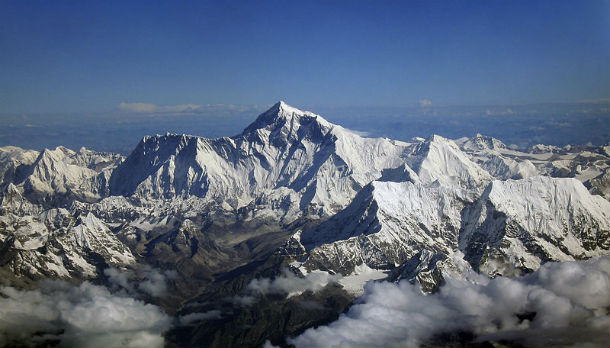 A new study finds a decline in snow and ice on Mount Everest and the national park surrounding it. The scientists have been studying temperature and precipitation trends in the area and found that the Everest region has been warming while snowfall has been declining since the early 1990s. Although researchers have not yet established a firm connection between the mountains' changes and climate change, they suspect that the decline of snow and ice in the Everest region is from human-generated greenhouse gases altering global climate.

The Himalayan glaciers and ice caps are considered a water tower for Asia since they store and supply water downstream during the dry season. Downstream populations are dependent on the melt water for agriculture, drinking, and power production. The glaciers provide water and power for roughly 1.5 billion people. Mount Everest is located in the Himalaya Mountains on the border between China and Nepal, with tallest peak at 8,848 m (29,029 feet) above sea level. 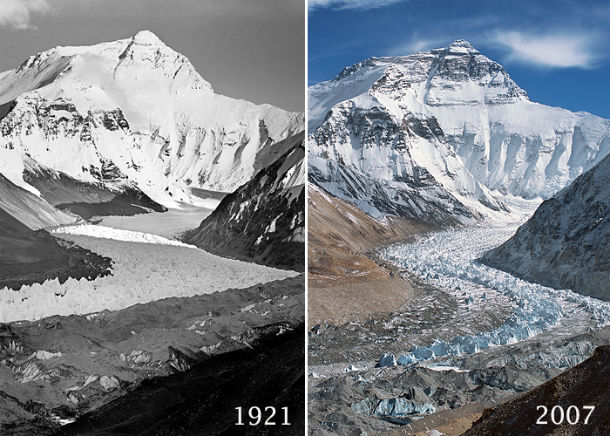 The Main Rongbuk Glacier and the north face of Mount Everest, as photographed from Tibet in 1921 (left) by George L. Mallory and in 2007 (right) by David Breashears. Situated at an elevation of 16,600 to 21,200 feet, the glacier experienced an average vertical loss of 330 feet between 1921 and 2007. Mallory and his climbing partner, Andrew Irvine, disappeared high on the northern slopes of Everest in 1924 during an attempt to be the first to summit the mountain. (Mallory photo courtesy of Royal Geographical Society.) (George L. Mallory/David Breashears)

Researchers determined the extent of glacial change on Mount Everest and the surrounding 1,148 square kilometer (713 square mile) Sagarmatha National Park by compiling satellite imagery and topographic maps and reconstructing the glacial history. Their statistical analysis shows that the majority of the glaciers in the national park are retreating at an increasing rate.

According to Sudeep Thakuri, who is leading the research as part of his PhD graduate studies at the University of Milan in Italy, the ends of the glaciers have retreated by an average of 400 meters since 1962. Glaciers in the Mount Everest region have shrunk by 13 % in the last 50 years and the snowline has shifted upward by 180 meters (590 feet).

The glaciers are melting faster than they are replenished by ice and snow so they are revealing rocks and debris that were previously hidden deep under the ice. Glaciers smaller than one square kilometer are disappearing the fastest and have experienced a 43 % decrease in surface area since the 1960s. Debris-covered sections of the glaciers have also increased by about 17 %t since the 1960s. 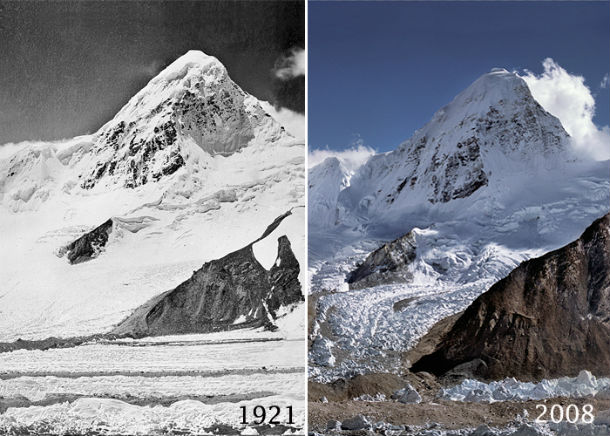 Details from a panorama of the West Rongbuk Glacier and Mount Everest, from a 1921 photo (left) by Major E.O. Wheeler and from a 2008 photo (right) by David Breashears. The glacier, located at an elevation of 17,300 to 24,400 feet, has experienced an average vertical loss of 340 feet in the past century. (Wheeler photo courtesy of Royal Geographical Society.) (Major E.O. Wheeler/David Breashears)

Researchers have been analyzing hydro-meteorological data from the Nepal Climate Observatory stations and Nepal's Department of Hydrology and Meteorology to evaluate the temperature and precipitation patterns in the area. Studied data show that the Mount Everest region has undergone a 0.6 degree Celsius (1.08 degrees Fahrenheit) increase in temperature and 100 millimeter (3.9 inches) decrease in precipitation during the pre-monsoon and winter months since 1992.

Most of Himalayan region are affected by climate change, but not all. Data from Karakoram Mountains, on the China-India-Pakistan border, show no significant glacial retreat and even indicate trend of rowing glaciers.

Featured image: Mount Everest as seen from the aircraft of Drukair in Bhutan. The aircraft is south of the mountains, facing north.(Credit: Wikimedia)