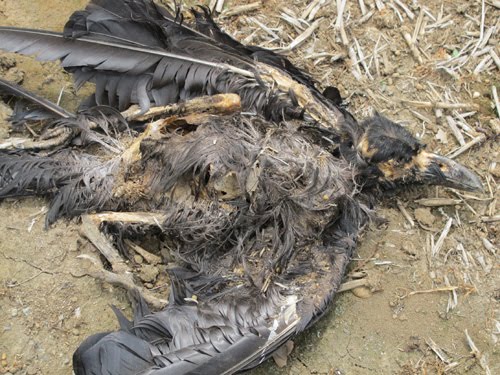 The mysterious epidemic that has claimed hundreds of crows in Jharkhand has now spread to Hazaribagh, with 350 crow deaths in Vishnugarh and Katkamsandi over the weekend, triggering panic among residents who have been advised by experts not to touch the carcasses.

More than 1 000 crows have died in Jamshedpur alone in the past one and a half months, besides a number of deaths in Ghatshila and Giridih.

In a report sent to the Union agriculture ministry on Thursday, the Indian Veterinary Research Institute’s (IVRI) Bhopal center had held the avian influenza virus, H5N1, responsible for the crow deaths in Jharkhand, according to Times of India.

The state coordinator of the Indian Bird Conservation Network (IBCN) Satya Prakash said the Union government had sent experts team to Jamshedpur and Bokaro to take blood samples of the dead crows and had mentioned that the crows died of H5N-1.

Avian flu had been detected in chickens earlier. Carcasses were sent to the IVRI center in Bareilly as well as the National Institute of Virology, Pune, to identify the exact reasons behind the crow deaths here.

At Bachra village in Katkamsandi block, crow deaths were reported since yesterday. Villagers from Katmansandi and Pelawal report more crow deaths. Around 50 crows also died at Harli village in Barkagaon block. People of the affected villages were instructed not to handle the dead crows without gloves. They were also instructed to bury the dead crows by digging deep holes so that the disease cannot spread to more areas.

With hundreds of crows dying in Ranchi, Bokaro, Jamshedpur and Dumka due to the H5N1 variant of bird flu, the animal husbandry department has asked locals to feed crows antibiotic-mixed cooked rice, to wear masks and gloves while burying a dead crow and to disinfect the area.