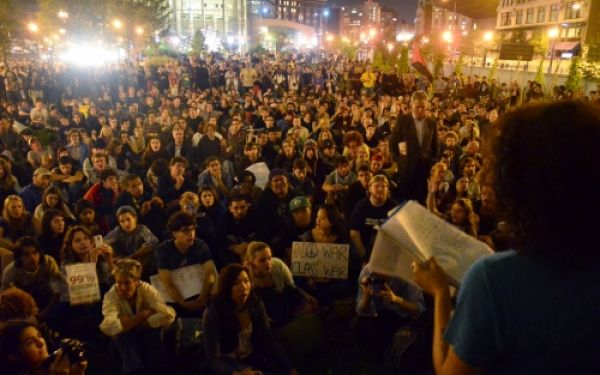 The US police continue to play cat and mouse with the Occupy movement, having torn down the last remaining Occupy Wall Street camp in San Francisco, arresting 55 people for illegal lodging.

The tents of the almost three-month-old movement have already been cleared several times but sprung up again when the main Occupy encampment in the city was demolished last Wednesday.

These last three months have seen a lot of police activity, with tactics changing several times against an entirely non-violent protest movement. Reports of mass arrests being made while peaceful protesters stand by chanting “Shame on you!” have become routine.

The latest crackdown on protesters on America’s West coast has seen 55 people arrested over the weekend in San-Francisco as they rallied in front of the Federal Reserve building.

In this instance, protesters had built no structures to protect themselves, and campers were easily pulled out of their tents and sleeping bags by a police contingent outnumbering them 2:1.

Many in the movement fear their message could vanish together with their tents.

This Monday, in order to re-energize the movement, they plan to block major ports on the West coast, from California to Alaska, by marching into them. The idea is to highlight economic inequalities in the country’s financial system, which they say is unfairly tilted toward the wealthy.

Given the track record of police brutality towards the movement, with pepper spray, tear gas and batons being used repeatedly on non-violent demonstrators, concerns are rising that the port marches might also turn ugly.

Not content with pepper spray and tear gas, the police are now devising fresh methods to deal with the movement. It has been revealed that undercover police officers infiltrated Occupy LA tent camps last month to find out how the protesters plan to resist an eviction and as well as to spy on people suspected of not properly disposing of human waste. (Source: rt.com)

Police deployment of sonic blasters at Occupy Wall Street and G-20 protest rallies are fueling both sales and criticism of the devices, which emit beams of sound with laser-like intensity.

More U.S. police and emergency-response agencies are using the so-called Long-Range Acoustic Devices instead of megaphones or conventional loudspeakers for crowd control, according to news reports and leading manufacturer LRAD Corp. of San Diego.

But the products, which the makers developed as nonlethal options for military use, are prompting outcries from people on the receiving end, who call them “sound cannons.” The city of Pittsburgh is fighting an American Civil Liberties Union lawsuit claiming the piercing tone from a police blaster during the 2009 G-20 summit permanently damaged a woman’s hearing. At least one Occupy Wall Street protester says New York City police also used the punishing alert tone, although police say they have used the device only to broadcast messages.

LRAD says its products offer police something louder than a megaphone and more benign than rubber bullets and tear gas for managing crowds, defusing hostage situations and serving warrants on dangerous suspects.

“All of these events have helped bring interest to LRAD as new way to take care of these type of situations where they haven’t had them before,” company spokesman Robert Putnam said.

He said LRAD is not a weapon but a long-range communication system for clearly broadcasting information, instructions and warnings.

The publicly traded company had record sales of $26 million in the 2011 fiscal year ending Sept. 30, up 57 percent from a year earlier. Foreign and domestic military customers accounted for at least 58 percent of sales. (Source: online.wsj.com)