Through August, the National Climatic Data Center (NCDC) estimated that ten weather disasters costing at least $1 billion had hit the U.S., at total cost of up to $45 billion. However, the October 29 snow storm brings us up to eleven billion-dollar disasters. Flood damage from the remnants of Tropical Storm Lee in the Northeast on September 8 is now estimated at more than $1 billion, and two outbreaks of severe thunderstorms and tornadoes - one in April and one in June--now have damage estimates exceeding $1 billion. A remarkable seven severe thunderstorm/tornado outbreaks did more than $1 billion each in damage in 2011, and an eighth outbreak July 10 - 14 came close, with damages of $900 million. In total, the fourteen billion-dollar disasters killed 675 people. Tornadoes, hurricanes, and floods in these fourteen disasters killed over 600 people, putting 2011 into fourth place since 1940 for most deaths by severe storms. Only 2005, with over 1,000 deaths caused by Katrina, 1969, with over 700 hurricane and flood-related deaths, and 1972, with 676 hurricane and flood-related deaths, were deadlier years for storms, according toNOAA.

The most extraordinary October snowstorm in over two centuries hit the Northeast U.S. on October 29, bringing snow amounts as high as 32" to Peru, Massachussetts. Not since the infamous snow hurricane of 1804 have such prodigious amounts of snow been recorded in New England and, to a lesser extent, in the mid-Atlantic states. Trees that had not yet lost their leaves suffered tremendous damage from the wet, heavy snow, and snapped branches and falling trees brought down numerous power lines, leaving at least 3 million people without electricity. Damage in Connecticut alone was estimated at $3 billion, exceeding the damage from Hurricane Irene. 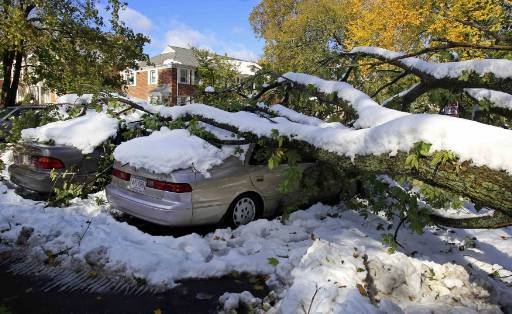 Tropical Storm Lee made landfall on the Lousiana coast on September 4, 2011, as a very wet tropical storm with 45 mph winds. Lee dumped over 10" of rain over Louisiana, Mississippi, Alabama, and Tennessee, but flooding damage was limited in these states due to pre-existing drought conditions. However, Lee's remnants reached the Northeast U.S. on September 8, where soils were already saturated from heavy August rains due, in part, to Hurricane Irene on August 28. Irene set the stage for what was to become the greatest flood in recorded history on the Susquehanna River. On September 5, a front stalled out over Pennsylvania and New York. Tropical moisture streaming northwards in advance of Tropical Storm Lee was lifted up over the front, and heavy downpours resulted. The rains continued for four days, and were amplified by the arrival of Tropical Storm Lee's remnants on September 7, plus a stream of moisture emanating from far-away Hurricane Katia, 1,000 miles to the south-southeast.

Binghamton, New York received 8.70" of rain in 24 hours September 7 - 8, the greatest 24-hour rainfall in city history. This was nearly double the city's previous all-time record (4.68" on Sep 30 - Oct. 1, 2010.) The record rains falling on soils still saturated from Hurricane Irene's rains ran off rapidly into the Susquehanna River, which rose an astonishing twenty feet in just 24 hours. By noon on September 8, the rampaging Susquehanna River crested in Binghamton at 25.71', the highest level since records began in 1846. Record flood heights were recorded downstream in Pennsylvania as well, where damage is estimated at over $1 billion. 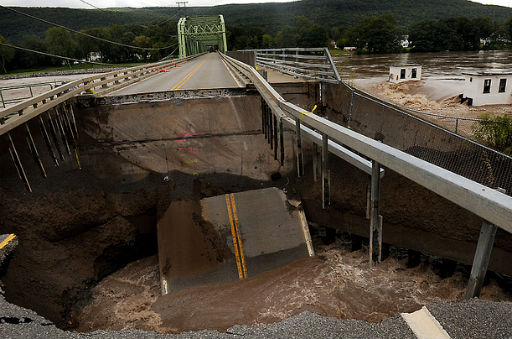 Hurricane Irene roared ashore over the Outer Banks of North Carolina on August 27, 2011, as a Category 1 hurricane with 80 mph winds. Irene made a second landfall on Long Island, NY on August 28 as a tropical storm with 65 mph winds. Major coastal damage resulted from the hurricane's storm surge and battering waves; two new channels were carved through the Outer Banks, isolating the barrier islands from the mainland. However, the main damage from Irene occurred due to the storm's heavy rains of 8 - 12 inches that fell over much of the Northeast. Record flooding hit rivers in NJ, NY, VT, PA, and CT, resulting in billions in damage and dozens of lives lost. 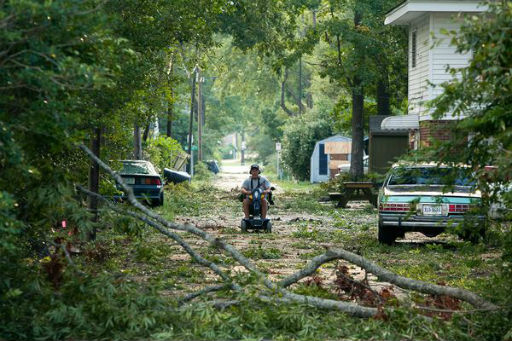 Winter snowfall was abnormally heavy in the Rocky Mountains of Montana and Wyoming this past winter (over 200% of average), and record rainfall fell over the Upper Midwest this Spring, the effects of which continue to be felt along the Missouri River. In May, the Army Corps of engineers began releasing a record amount of water through the dams above Gavins Point, including the Garrison Dam in Central North Dakota. The flooding has kept many bridges closed, making it impossible to cross the river for a hundred miles at a time in some places. 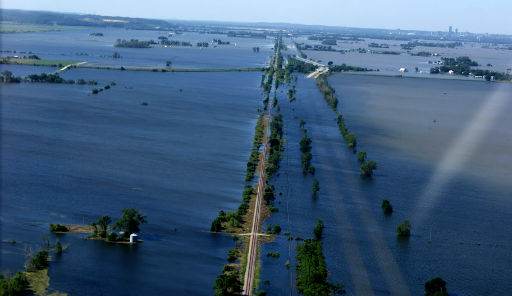 Texas is in the midst of one of the worst droughts of its history. As of June 28, 2011, 91% of Texas was in extreme or greater drought, and 47% of the state was in an "exceptional drought," the most severe category. In April and May of 2011, wildfires burned over 3 million acres across the state. The governor of Texas, Rick Perry, has declared a State of Disaster every month since December 2010. As of June 16, NCDC estimates that the drought and fires in Texas have cost $3.0 billion—an amount that is likely to rise as the event continues. 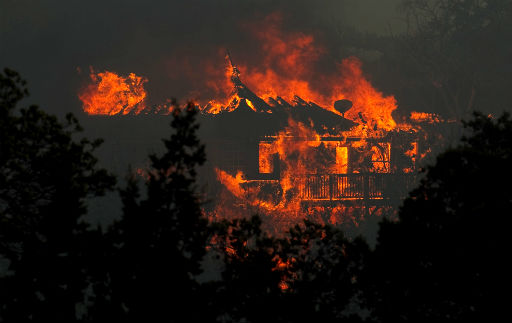 Between the spring snow-melt and two storms that dumped massive amounts of rain in the Mississippi watershed in April, the Mississippi was in for a flood of record proportions. The river began to bulge by the beginning of May, flooding every state from Illinois to Louisiana and Mississippi. A federal disaster was declared by the President in Kentucky, Tennessee, and Mississippi. In an effort to save Baton Rouge and New Orleans, Louisiana, the Army Corps of Engineers opened the Morganza Spillway on May 14, which flooded 4,600 square miles of Louisiana. The NCDC estimates $4 billion in damages from this flood, although the final amount might not be fully realized yet. 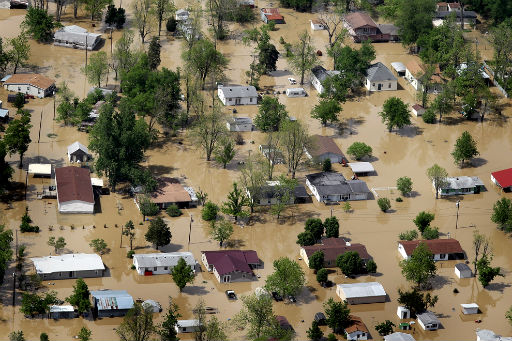 This seven-day outbreak of severe thunderstorms and tornadoes featured four EF-3 tornadoes. The worst storm damage occurred in Wheeling, Illinois. The whole event is estimated to have done $1.25 billion in damages.

This six-day tornado outbreak killed approximately 180 people, and includes the EF-5 tornadoes that rolled through Joplin, Missouri on May 22, and El Reno, Oklahoma on May 24. Tornadoes in this storm were spawned from central Texas to the Upper Midwest. The whole event is estimated to have done $7 billion in damages. 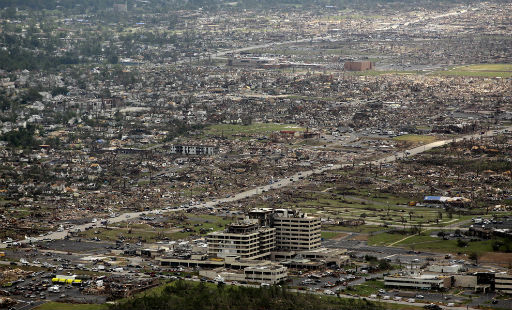 Most of the tornadoes spawned in this storm happened in the Southeast, from Mississippi to Virginia, though a total of 334 tornadoes have been confirmed in 21 states from Texas to New York. April 27th, in particular, was a notably destructive and deadly day, as 188 tornadoes touched down in the Southeast, four of which were rated EF-5. The NCDC estimates that the Super Outbreak resulted in at least $5.5 billion in damages. 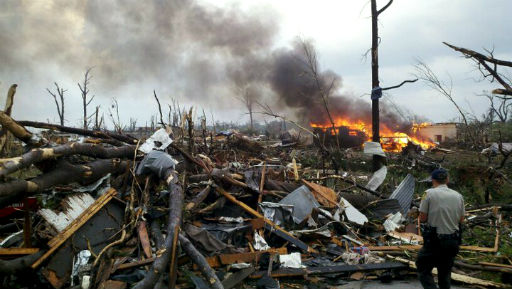 This three-day outbreak of severe thunderstorms and tornadoes featured 61 tornadoes. In the early hours of April 20, 2011, a tornado tore through a neighborhood in Oregon, Ohio leaving some significant damage and no injuries.

This storm generated at least 200 tornadoes across 16 states in mid-April, leading to 38 deaths. The system moved quickly from the Plains to the Mid-Atlantic, where the most notable tornado of the outbreak occurred near Raleigh, North Carolina. This tornado was rain-wrapped as it headed in the direction of Raleigh, and was later rated an EF-3. The NCDC estimates that this outbreak resulted in $2 billion in damages. 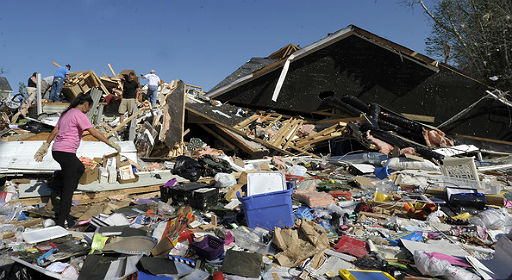 Tornadoes were reported in Virginia and Iowa from April 8-11. A significant day of severe weather occurred on April 9th, as a powerful storm over the Upper Midwest spawned tornadoes in Iowa. The strongest of these tornadoes was the huge, 3/4 mile-wide tornado that plowed through the tiny town of Mapleton, Iowa on Saturday evening, leaving a trail of destruction 3.5 miles long. The tornado, preliminarily rated as an EF-3 with 136 - 165 mph winds, flattened 20% of the town of 1200 residents and damaged half of the buildings. The NCDC estimates that this weekend of severe weather caused $2.2 billion in damages. 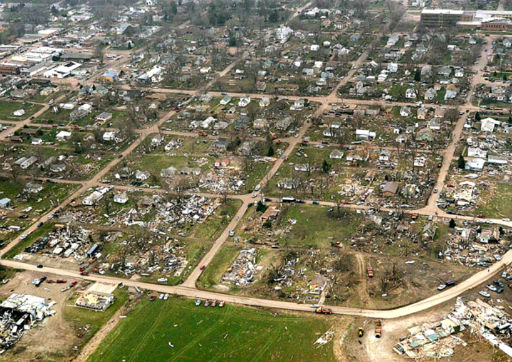 Damaging straight-line winds and tornadoes were spawned by a storm that pushed through the central U.S. in early April. Power outages were extensive across the southern and eastern U.S., and many people were killed by falling trees and branches. Tornadoes touched down in Arkansas, Kentucky, and Mississippi. 1,318 reports of damaging wind were submitted to local Weather Service offices on April 4th alone. The NCDC estimates that this tornado and wind event caused $2 billion in damages.

This storm stretched from northeast Mexico to Canada, but is most memorable for its effect on Chicago, where 1-2 feet of snow fell, combined with winds over 60 mph which led to blizzard conditions. 21.2 inches of snow fell at Chicago O'Hare International Airport, making it the third largest snowfall total in Chicago history. Blizzard conditions were reported in many other large cities during the storm's lifetime, including Oklahoma City, St. Louis, Detroit, Cleveland, and New York. This storm also brought ice and wintry mix as far south as Albuquerque, Dallas, and Houston. At least 36 deaths were caused by this storm, most of which were vehicle-related. NCDC estimates this storm did at least $3.9 billion in damage. (Wunderground) 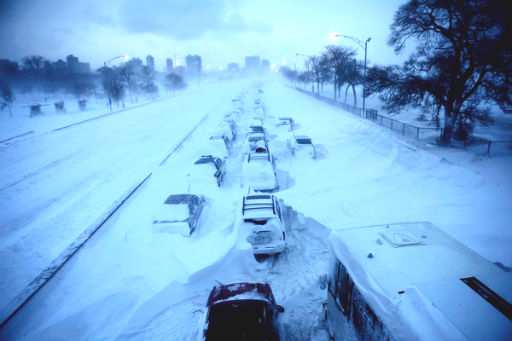 Six EF-5 tornadoes have been confirmed by the National Weather Service in 2011: