December 2015 is one of the worst months of weather on records for the United States, with some areas not seeing a break in rainfall for several weeks. Currently, 17 million people are living in areas with flood warnings.

Although the storms are now gone, the rivers have kept rising from Texas to Illinois. Missouri is one of the worst affected areas with three major rivers (Missouri, Meramec and the Mississippi) all above the flood stage.

National Weather Service's St. Louis office said that Missouri will have a major to historic river flooding through early next week. "Record crests are expected on area rivers over the next several days." 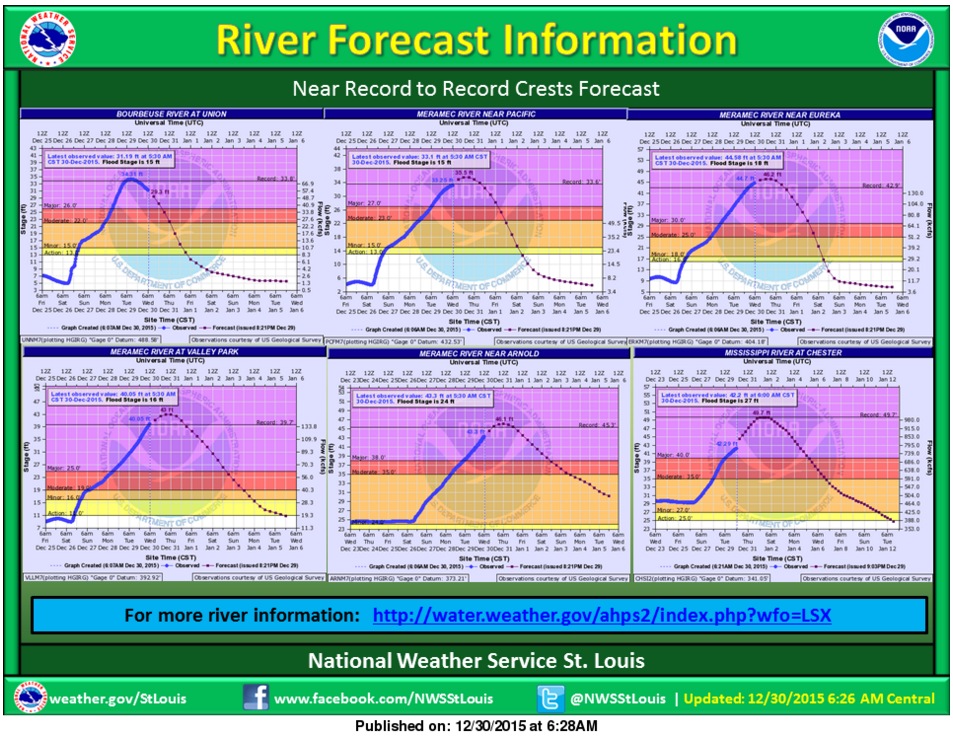 "We've never seen water this high," Missouri Gov. Jay Nixon told CNN. "The Meramec River is going to be 1.2 m (4 feet) over its historic level." The Mississippi River is currently over 13 m (42.6 feet) above the flood stage and is expected to continue to rise, peaking at what is expected to be a new record level on December 31.

"At its peak, the Mississippi should be at its highest level ever, beating the highest level of the great flood of 1993. That's why we've got a state of emergency," Nixon said.

Scenes from towns along the Mississippi this New Years. This river is not supposed to flood in December pic.twitter.com/pvtMIZw0U8

#Missouri in a state of emergency over devastating floods https://t.co/qzAkdh4loF pic.twitter.com/5VzuieNFQV

Over the past week, severe weather in US claimed lives of 49 people. Thirteen of them died in Missouri, 11 in the Dallas area, 5 in southern Illinois, 5 in Oklahoma and at least 1 in Georgia.

Tornadoes are being blamed for most of the deaths in Texas, but many of the rest died after their cars were swept away by floodwaters.

At least 69 tornadoes were reported across the country in just the past week, well above the average of 24 for the entire month of December.

With the United Kingdom, South America and the United States all experiencing massive flooding this month, many point the finger at one of the strongest El Nino events in recorded history.