A storm described as a "tornado" has left an aftermath of damage in a part of northern England. The violent storm struck Greater Manchester Tuesday afternoon downing trees and damaging homes. Witnesses described skies going "pitch black" and "all whirling around," as well as a sudden pickup in the wind.

Elsewhere, a report of a "small tornado" was also received by the Lancashire Police in Blackburn. This county, like Greater Manchester, reportedly had storm damage. The A666 road between Blackburn and Darwen was closed after tiles were "ripped off" the roof of a pub.Weather observations at Manchester Airport showed a sudden wind shift from southerly to westerly near the time of the reported severe weather. Winds at the time were strong, though not damaging. A burst of rain followed the wind shift. 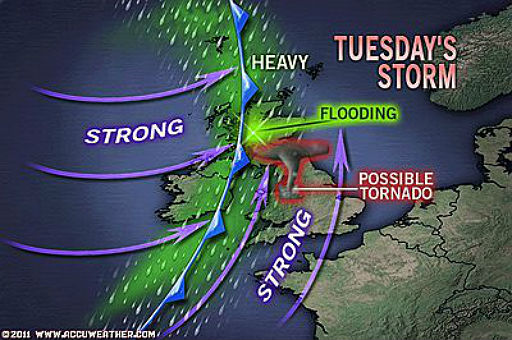 A strong storm unsettled much of the U.K. on Tuesday, lashing out with high winds and heavy rain in the north and west. Torrential rain caused headaches for many in central Scotland, where many roads and some properties were flooded.

There were reports of twister hit the Wales region. Gusts tore through Sandy Beach Caravan Park at Llanfwrog, near Valley, with the owners describing them as being like a tornado. Holliday resort in Anglesey were hit by 78mph winds ripped through the site. Surrounding villages were flooded by torrential rain. A sudden gust of wind toppled a chimney in Heaton Moor near Stockport.  had warned of an increased risk of tornadoes on Tuesday. The Met Office confirmed the weather was some of the worst in the country. It recorded winds of between 61mph and 81mph in north west Wales on Tuesday.