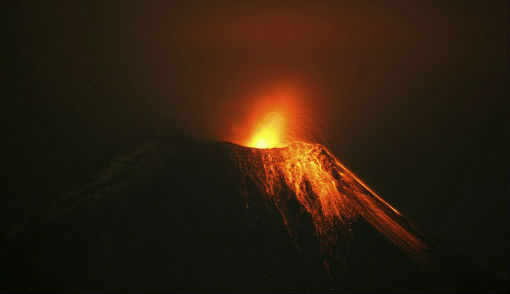 The Geophysical Institute of Ecuador (IGEPN) reported that  eruption of Tungurahua volcano created large clouds of gas and ash above the summit and it’s directed towards the southeast and the west, near city of Banos. Ash cloud up to 4 kilometers in the sky and pyroclastic flows  approximately one kilometer down the volcano flank could be seen on Tuesday.

Tungurahua volcano began erupting Monday, creating an ash plume, which reached an average height of 3 kilometers. A slight volcanic ash fall was reported in Apple, Choglontús and Runtún Pondoa sectors. The authorities are encouraging residents living near the volcano to evacuate, as presence of dense clouds in the region have made it difficult to monitor the development of pyroclastic flows.

In latest update by IGEPN it is stated that people do not stay in areas considered high risk, especially in the valleys and ravines that descend the volcanosince the current eruptive process began very abruptly and has generated since its inception several pyroclastic flows that have hit the top of the volcano’s flanks. The country’s authorities are most concerned at the volcano’s pyroclastic flow – fast-moving boulders and gas that can reach speeds of up to 450mph and temperatures of up to 1000c (1,830f).

The sparsely populated land includes several communities on the volcano’s slopes, according to the National Secretariat for Risk Management (SNGR). Populations located in risk areas such as Cusua, Juive, Palictahua and Manzano voluntarily evacuated to safer locations. Several communities in the shadow of Tungurahua, including the tourist town of Banos with a population of 15,000, were forced to evacuate during a violent eruption of the volcano in 1999. A red alert was declared last December when Tungurahua reactivated, prompting a temporary evacuation of residents and tourists.

Read our last article about Tungurahua with information about geodynamic context and volcano characteristics.