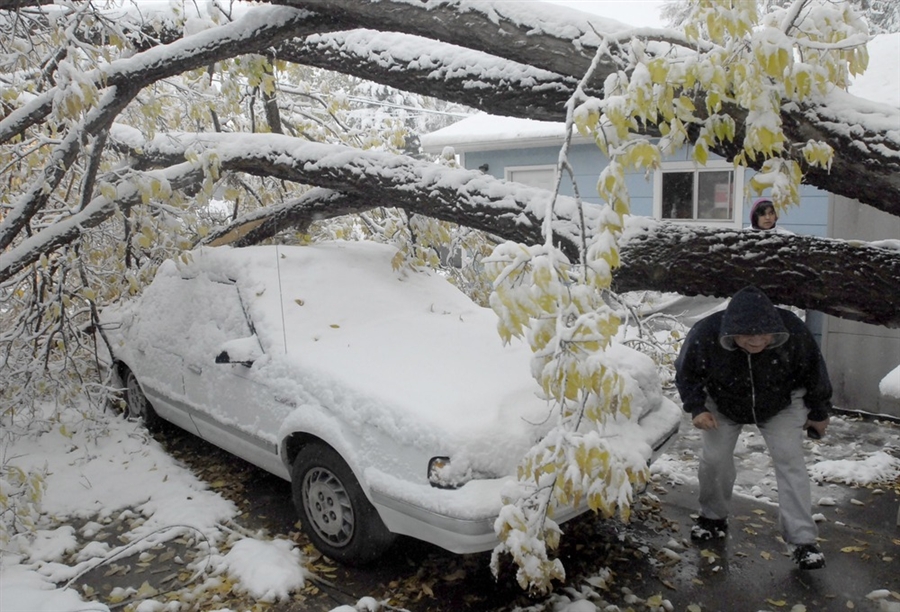 A rare October snowstorm bore down on the heavily populated U.S. Northeast on Saturday, knocking out power to 1.7 million customers, delaying airline flights and threatening some areas with up to a foot of snow.

A storm set to dump heavy, wet snow on millions of people in the Northeast will also scream with high winds in coastal and some inland areas this weekend. While far from the worst windstorm ever, this screamer knocked out power, down trees and cause damage in New England, New York, New Jersey, New Brunswick and Nova Scotia. This could end up being worse than Irene in terms of downed trees and power outages, because winds will be stronger over a larger area according to AccuWeather.

New York Times reports that with more than 2.5 million trees occupying the 5,000 properties within the city parks departments’ jurisdiction, there had been roughly 800 calls logged into the city’s 311 system, by evening, about fallen trees or limbs from across the five boroughs, though about half came from Staten Island.

Fresh cold air is plunging into the Northeast on the backside of this weekend’s historic snowstorm and will not be quick to depart. A band of heavy, wet snow that blanketed areas of the northeast downed trees, causing thousands of homes to lose power and delays at airports. Latest news reports that about 1.1 million homes in the northeast are without power. 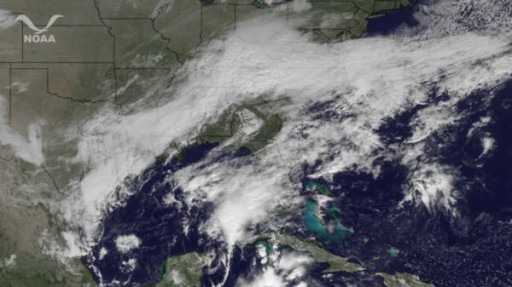 As of 3:00 p.m. EDT, Alleghenergy.com reported there were 30,245 customers without power in West Virginia. Maryland had 26,140 homes with no power, while Pennsylvania had 14,785. Almost as many were in the dark in Connecticut and Pennsylvania. Massachusetts, New Jersey and Connecticut declared states of emergencies. The snow is very wet and heavy. Once some snow has accumulated on tree branches, it causes the branch to break. In some instances, even whole trees have been broken and dropped to the ground. The trees and branches have brought many power lines down with them. As the storm tracks to the north and impacts New Jersey, New York and Connecticut into Saturday night, there will be more power outages as more trees are broken.

By evening, Gov. Chris Christie of New Jersey had declared a state of emergency for the entire state, where more than 200,000 customers of the utility PSE&G had already lost power. For areas in Westchester County and Connecticut, whose residents have been slammed repeatedly in recent years by unexpectedly severe storms, some found it difficult to even navigate home to check on their properties, from trips into Manhattan as the storm kicked in. 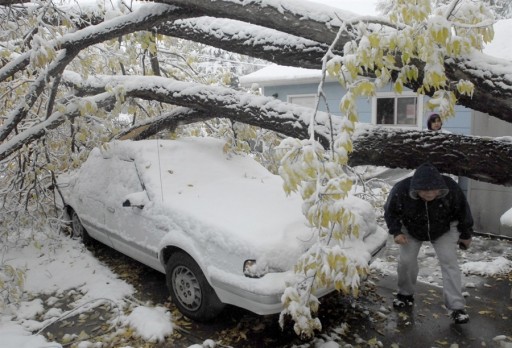 Any measurable snow in the big northeastern cities would be about a month early, according to the Weather Channel. While October snow is not unprecedented, this storm could be record-setting in terms of snow totals.

New York City has shattered an October snow record with highest snow totals elsewhere across the Northeast topping a foot. An unprecedented (for October) 1.3 inches of snow was measured in New York City’s Central Park at 2 p.m. EDT Saturday.

Gusty winds accompanying the storm will speed up the rate at which your home or apartment cools once power is lost, especially in residences in which windows and walls are drafty. Sunday night will be even colder with lows dipping into the teens in portions of interior New England. Much of the rest of the Northeast will once again have lows in the 20s Sunday night.

“This is very, very unusual,” said John LaCorte, a National Weather Service meteorologist in State College, Pa. “It has all the look and feel of a classic midwinter nor’easter. It’s going to be very dangerous.” 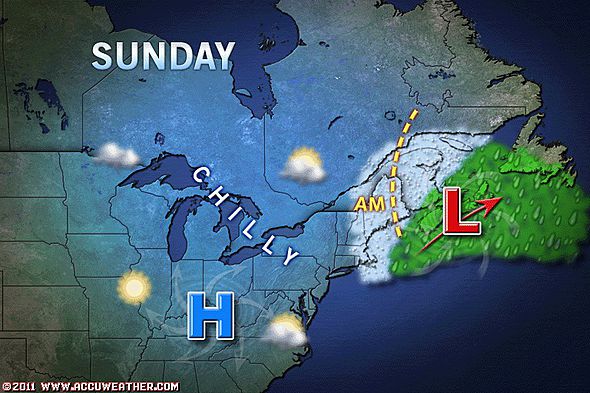 “We seem to have hit the jackpot,” said Charlie Foley, a meteorologist for the National Weather Service for NYTimes. “It is unusual to have something like this before Halloween.”

People located in areas to be hit by this storm either with snow, rain, wind, or all three may want to have a contingency plan in place in case the power goes out for an extended period of time.

On the other side of the country, Denver saw another October snow oddity this week. The city went from a record daily high of 80 Fahrenheit (27 degrees Celsius) to several inches of snow in 24 hours.