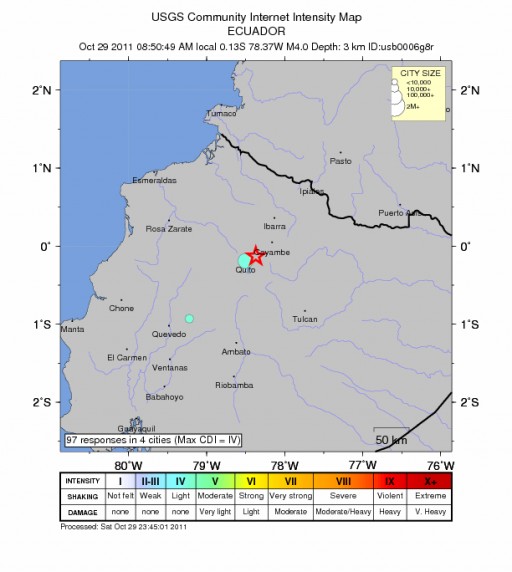 Based on EarthquakeReport, even a small earthquake like this one is enough to trigger landslides. The Quito unofficial housing areas are seen as one of the most dangerous on the planet. 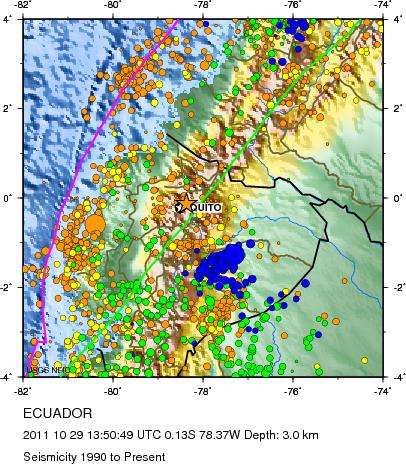 A catastrophic magnitude 8.8 earthquake off the coast of Ecuador and Colombia generated a strong tsunami that killed 500 to 1500 there. It was observed all along the coast of Central America and as far north as San Francisco and west to Japan…..The wave arrived in Hilo at about 12.5 hours after the earthquake. It covered the floor of the old wharf at the end of Waianuenue Street and the railroad tracks between there and Waiakea. The range of oscillations in water level was 3.6 m and the period 30 minutes. The channels of the Wailuku and Wailoa Rivers alternately dried up, then disappeared under the tidal wave.

Kahului: Three waves arrived at 20-minute intervals. The second wave was larger than the first, and the third was larger than the second. The water rose about 0.30 m above the mean sea level mark. According to other sources, the water surface rose to the level of the old steamship pier and the road running along the coast.

The tide gauge at Honolulu began to register oscillations about 12 hours after the earthquake. The tsunami apparently began with a flood; then the oscillations intensified, and the fourth wave, which was the highest, had a height of 0.25 m. The period of oscillations was 20-30 minutes. Three separate trains of oscillations were registered.

According to the accounts of witnesses, disturbances in water level on Honolulu Bay began to be observed at 3:30 UTC February 1. At 4:15 UTC there as an extremely great ebb. All the steam and sailboats in the bay were turned around. Then a sudden flood tide reached a considerable height.”(USGS)

The rupture zone for this earthquake was 500–600 km long, and encompassed those for the earthquakes of 1942 (Mw=7.8), 1958 (Mw=7.7) and 1979 (Mw=8.2). The lack of overlap between the three more recent events suggest the presence of minor barriers to rupture propagation along the plate boundary. Although these three events ruptured the same area of the plate boundary overall, they released only a small fraction of the energy of the 1906 earthquake.

Because the sequence of three earthquakes that ended in 1979 did not release as much energy as the 1906 event, it has been suggested that an earthquake of similar magnitude to that in 1906 was likely in the near future. However, analysis of the amount of slip associated with the three later events suggest that they have released most of the accumulated displacement across the plate boundary since 1906. (Wikipedia)