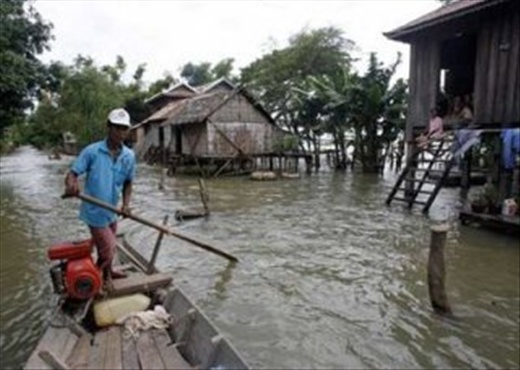 The first vice president of the National Committee for Disaster Management reported on Monday that the Mekong River and flash floods in Cambodia had already claimed at least 207 lives and affected 1.2 million in 19 cities and provinces.

Vice president Nhim Vanda said 52 percent of the fatalities were children. So far, over 300,000 hectares of rice fields have been affected while another 100,000 hectares were completely destroyed. Vanda added that about 600 homes were swept away by the floods while 196,600 houses, 400 Buddhist pagodas and 1,132 schools were inundated. Moreover, about 180 kilometers of national roads and 1,800 kilometers of gravel roads were also affected. Direct economic loss was estimated at 161 million U.S. dollars.

Meanwhile, the government has released 1,900 tons of rice for the flood victims. To date, the Cambodian government, the Cambodian Red Cross, charitable organizations and donor nations have distributed emergency supplies to more than 70,000 households. China, Japan, the World Food Program, and several local and international organizations also provided emergency relief to the flood victims. The Asian Development Bank also pledged a grant of 3 million U.S. dollars for the rehabilitation of gravel roads in the affected areas.

Nhim Vanda said that as of Monday, floods have been slowing receding, but only in Phnom Penh, capital of Cambodia, the Mekong River’s water level still slightly rise to 10.86 meters.