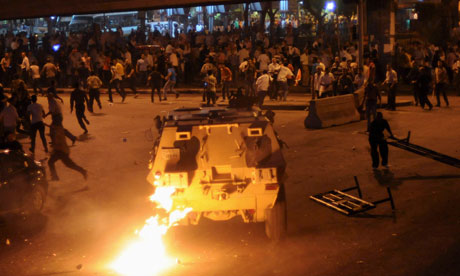 At least 25 people were killed when troops crushed a protest about an attack on a church in the worst violence since the uprising that toppled Hosni Mubarak.

Armored personnel carriers sped into the crowd late on Sunday to break up the demonstrators near the state television building. Videos posted on the Internet showed mangled bodies. Activists said corpses had been crushed by the vehicles. 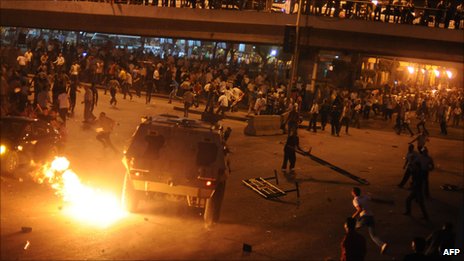 “Instead of advancing to build a modern state of democratic principles, we are back searching for security and stability, worrying that there are hidden hands, both domestic and foreign, seeking to obstruct the will of Egyptians in establishing a democracy,” Prime Minister Essam Sharaf said on state television.

“We will not surrender to these malicious conspiracies and we will not accept reverting back,” he said on Monday before an emergency meeting of the full cabinet later in the day.

Christians, who make up 10 percent of Egypt’s roughly 80 million people, took to the streets after blaming Muslim radicals for partially demolishing a church in Aswan province last week. They also demanded the sacking of the province’s governor for failing to protect the building.

The Health Ministry said 24 people were killed and 272 people wounded, including 253 who were taken to hospital. State media later put the toll at 25 dead, the bulk of them Copts. Reuters

“This was not violence between Christians and the army, nor was it violence between Christians and Muslims, there were thugs involved,” said Father Youssef Samir, a Coptic priest, outside the state television building downtown, where many of the deaths occurred. Police in riot gear directed traffic today along the Nile, where an upturned, burnt-out car and smashed glass remained from the violence. Funerals of many of the dead are being held today. BusinessWeek

Christians complain of discrimination, citing rules that they say make it easier to build a mosque than a church. Tensions have often in the past flared over inter-faith romantic relationships, church building and other issues.

But since Mubarak’s removal on February 11, incidents have spun into violence more swiftly. Christians say no one has been tried yet for the burning of a church in Helwan, south of Cairo, in March, after which 13 people were killed, or for violence in the Cairo suburb of Imbaba on May 7 that cost 15 lives.