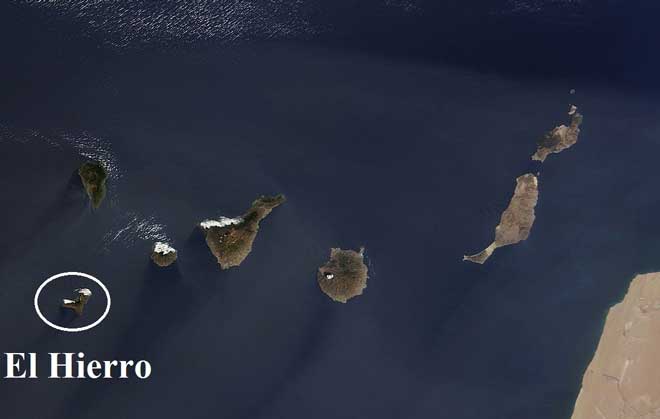 A submarine volcanic eruption is taking place approximately 5 kilometres off the southern coast of El Hierro, the smallest of The Canary Islands.

The Mayor of La Frontera (El Hierro), David Cabrera, confirmed in an interview on Radio iron Garoé that ‘underwater eruption’ is taking place about 900 metres beneath the sea surface five kilometres south of La Restinga. The eruption has been ongoing for four hours, the Mayor said.

Spanish newspaper laopionion.es quoted the Minister of emergencies of the Cabildo of El Hierro, Maria of Carmen Morales, as saying the eruption is taking place because ‘the seismic movement of 4.3 occurred on Saturday afternoon caused a fissure, from where the energy is been released’. Scientists remain unclear if the emissions are gas or lava.

“Scientists from IGN have reported to the direction of the Plan all the indicators that have been analyzed to point towards the possibility of the beginning of an eruptive process that has changed the type of waves that have registered seismographs in the last hours, implying the beginning of emission of gases or lava…”

Local media agency Canarias7 reported on Monday that Government authorities have suspended ferry activities to and from the 285 square-kilometre island. English language newspaper  islandconnections.eu reported: “The martime chief for the province of Santa Cruz de Tenerife Antonio Padrón has issued a recomendation that boats should not sail closer than four miles off El Hierro. Divers have also been told to suspend all activities.”

El Hierro is situated in the most southwestern extreme of the Canaries.  The  island was formed after three successive eruptions, and consequent accumulations, the island emerged from the ocean as an imposing triangular pyramid crowned by a volcano more than 2,000 metres high.

The volcanic activity, principally at the convergence of the three ridges, resulted in the continual expansion of the island. A mere 50,000 years ago, as a result of seismic tremors which produced massive landslides, a giant piece of the island cracked off, crashed down into the ocean and scattered along the seabed. This landslide of more than 300km3 gave rise to the impressive amphitheatre of the El Golfo valley and at the same time caused a tsunami that most likely rose over 100 metres high and probably reached as far as the American coast.