In August 501 volcanic earthquakes felt at Papandayan volcano in Indonesia

Unrest continues at Papandayan volcano in Indonesia.  More than 500 shallow volcanic earthquakes were detected between 1-24 August. Volcano shows a weak plume rising 1 km above the crater. There was a decrease in sulphur dioxide emission from the crater from 8 tonnes per day to 6 tonnes between 12-23 August.

The alert status at the volcano remains at level 3. There has been no increase in deformation of the volcano. 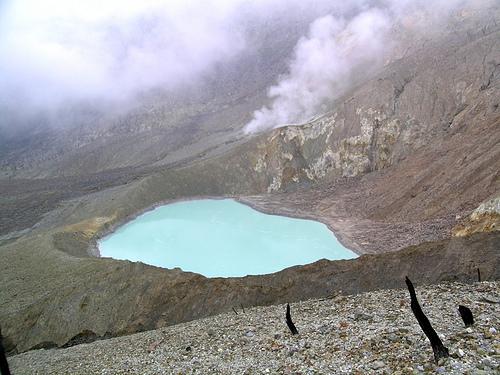 Papandayan volcano is located 70km SE of Bandung. The volcano is one Indonesia's tourist attractions. Numerous small vents are located within the crater, known as Kawah Mas, Kawah Baru, Kawah Nangklak, Kawah Manuk and many others with solfataras emitting smoke and hot fumes from its inner sides.

Papandayan volcano was placed on level 3 alert (out of maximum 4) after an increase in unrest. Seismic activity has increased at the volcano with a doubling of volcanic earthquakes in the first 2 weeks of August compared to previous months. Deformation measurements have detected an 18 mm inflation of the volcano on 10th August compared to 4th July 2011. Temperature in one of the four craters increased from 106.4 to 107.5 deg C between 7-12 August. A two km exclusion zone was placed around the crater.