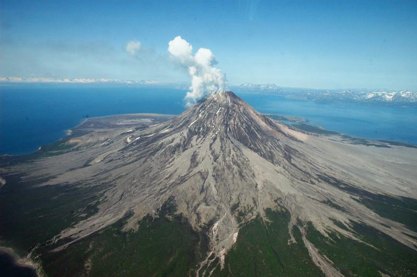 Cleveland Volcano, located on uninhabited Chuginadak Island in the Aleutians, has begun building a lava dome. An Alaska volcano has begun erupting, but it is not yet posing a serious hazard to populations or aviation in the region.

The eruption was described as a “slow effusion of magma that is forming a lava dome” by John Power, the scientist-in-charge at the Alaska Volcano Observatory.

Along with the quiet nature of the eruption, the remote siting of the volcano has so far kept the hazard level low. 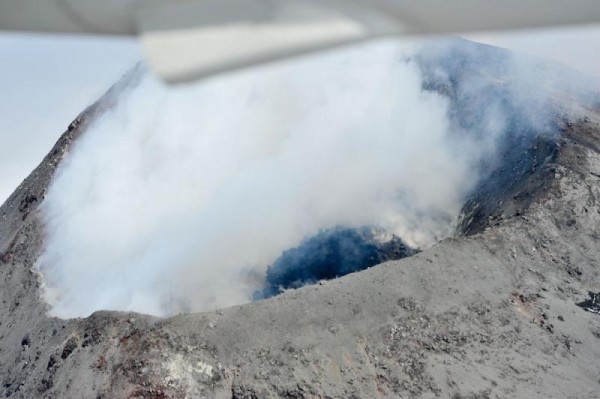 However, continuing growth of the lava dome could eventually pose a threat of ash cloud eruption, a potentially serious event of utmost interest to aviation. The dome, thus far confined to the summit crater, could generate explosions if it expanded enough to spill out.

It is apparently not possible to say how long the dome-building might last. Past experience with other dome-building eruptions shows that dome growth can last for weeks to months. Notoriously cloudy Aleutian weather can make observation of the volcano difficult. The volcano is not “wired,” inasmuch as it lacks a real-time seismic network of the kind used some of the Earth’s more active volcanoes.

Possible thermal anomaly at the summit of Cleveland volcano observed yesterday evening in several satellite images. Effusive eruption of lava dome in summit crater possibly continuing. AVO has received no additional information or observations about unrest at the volcano.

Without a real-time seismic network on the volcano, AVO is unable to track local earthquake activity related to volcanic unrest, provide forecasts of eruptive activity, or confirmation of explosive, ash-producing events. AVO is monitoring the volcano using satellite data as it becomes available. (AVO)