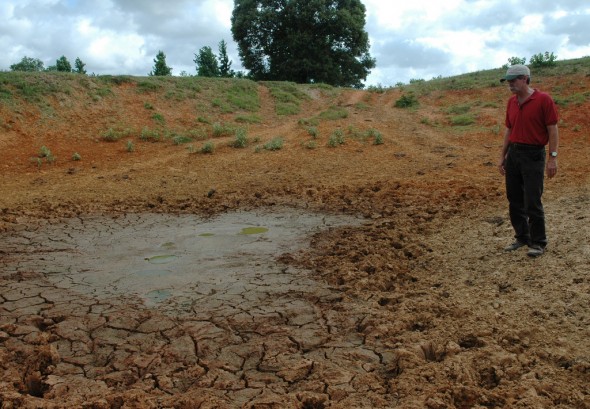 More of the United States was in exceptional drought in July 2011 than in any other month in the past 12 years, according to the National Climatic Data Center. The worst of the drought is spread across Texas, Oklahoma, New Mexico, and parts of Arizona, Colorado, Nebraska, and Louisiana. But 26 percent of the lower 48 states experienced severe to extreme drought in July.

On the other hand, about 33 percent of the contiguous United States experienced exceptionally rainy weather in July. The wet weather occurred largely in the Northern Plains and Western states. 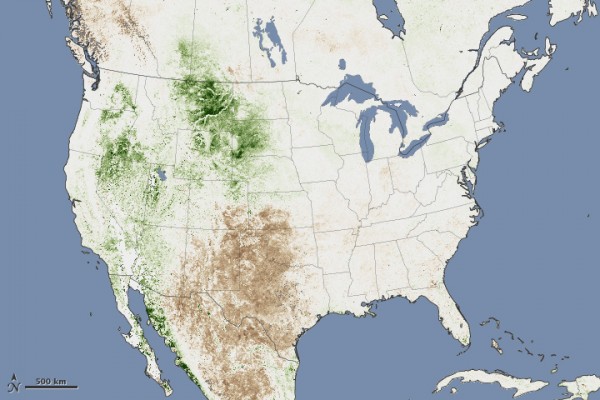 These weather patterns—the mix of unusually dry and unusually wet—are reflected in plant growth throughout the month. The image shows plant growth in July compared to average conditions. Places where plants were growing more than average are green, while unusually poor growth is shown in brown. The image was made with data from the Advanced Very High Resolution Radiometer on the NOAA-18 POES satellite.

The worst growing conditions are, unsurprisingly, in the Southern Plains. States throughout the region reported poor pasture conditions and struggling crops. Much of the southeast and eastern United States is also mildly dry. These dry conditions weren’t helped by temperatures in July. For most of the United States, July was unusually hot, drying the soil and baking crops.

The Northern Plains and Western States, on the other hand, experienced a cool, rainy July. California had its eighth rainiest July on record, while Montana, North Dakota, Utah, Wyoming, and South Dakota all received above-average rain. This is reflected in plant growth, particularly in Montana and South Dakota.

The culprit behind these unusual weather patterns is a persistent high pressure system that is steering storms away from the south central United States. Based on current conditions, the Climate Prediction Center expects the drought to last through at least the end of October. In some parts of the South, it would take more than 20 inches of rain to end the drought in a month. (EarthObservatory)

(according to the National Weather Service) 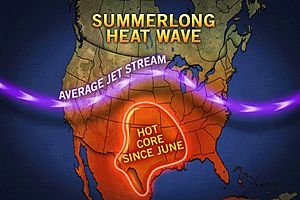 The 100-degree heat this summer has been relentless, with several cities on pace to shatter all-time records set during the benchmark heat wave of 1980. Wichita Falls has already shattered its record for most consecutive 100-degree days. Dallas and Waco are close.

Temperatures have hit the triple digits in Wichita Falls, Texas, for 50 days straight, as of Wednesday. The last time the city had a day below 100 degrees was June 21.

While there could be some temporary relief late this week, it would not be the end altogether. More hot days lie ahead through September. (AccuWeather)

State of the climate: National overview for July 2011.