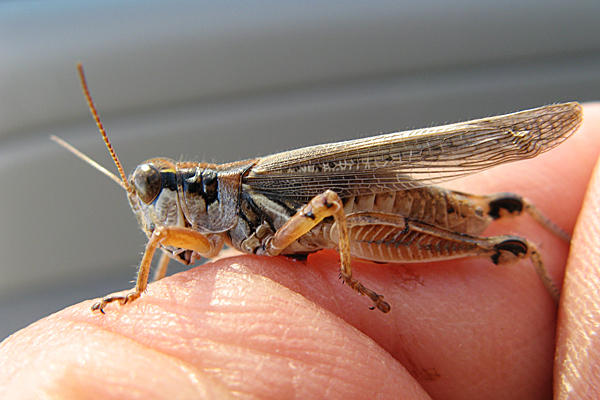 Texans just can’t catch a break this summer. In the midst of this historic drought now there’s a grasshopper problem. A large seasonal population of grasshoppers is taking ranchers’ land. The pests are eating the grass intended for cows and other animals.

The drought conditions in Texas have brought on a large population of grasshoppers. Texas farmers that are already dealing with poor crops due to the lack of rain, now have to deal with more grasshoppers than usual, according to Myfoxlubbock.com.

Fungus, one of the natural controllers of grasshopper population growth, needs moisture to grow. There is very little fungal growth when there is a drought and this allows the grasshoppers to thrive.

A swarm of grasshoppers can fly up to 15-miles a day, and eat the grass and crops along the way, according to About.com. Eating the grass is problematic for cattle ranchers who depend on the grass to feed their livestock. The grasshoppers can be devastating to any crops in their path. A female grasshopper will lay between 20 to 120 eggs in an egg mass. She will produce between eight and 25 masses.

The eggs hatch from late April or early May into June. The good news is that an extreme drought can keep the eggs from hatching and reduce egg production. 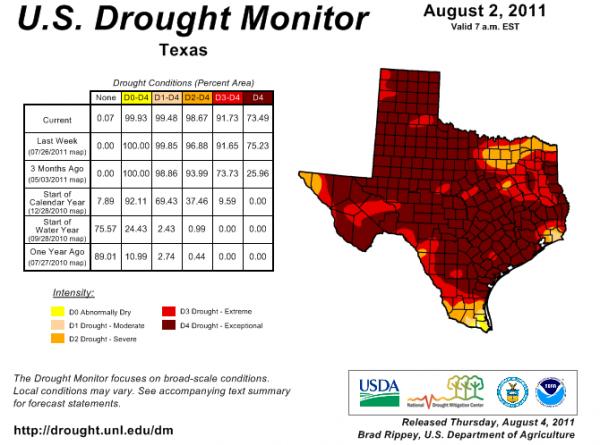 Tropical Storm Don—which made landfall on July 29 between Brownsville and Corpus Christi—was a mighty disappointment for parched Texas.  Scattered showers, totaling mostly less than an inch, were limited to Deep South Texas, as the storm literally disintegrated upon moving inland.  Meanwhile, a record-shattering string of 100-degree readings continued into August across parts of the Lone Star State.  Tyler, TX, posted a 36-day streak (and counting) of triple-digit heat from June 28 – August 2, nearly doubling its former mark of 20 days set from July 15 – August 3, 1998.  Dallas-Ft. Worth registered highs of 100°F or higher on 32 consecutive days (and counting) from July 2 – August 2, second only to a 42-day stretch of triple-digit heat from June 23 – August 3, 1980.  With an average temperature of 89.2°F, July 2011 was the hottest month on record in Oklahoma City, Oklahoma, smashing its Dust Bowl-era record of 88.7°F set in August 1936.  Childress, Texas (90.2°F), also demolished its long-standing “hottest month” record, previously set with 89.0°F in July 1934.  Elsewhere in Texas, Wichita Falls (92.9°F) edged its July 1980 standard of 91.9°F.  For the second consecutive month, Lubbock, TX, experienced its hottest month on record (85.9°F in June and 86.0°F in July; previously, 85.4°F in July 1966).  Adding insult to injury was the ongoing historic drought.  For example, Midland, Texas, completed another month without measurable precipitation (rainfall greater than a trace last fell on May 20).  Midland also endured its driest 10-month period on record, with just 0.18 inch falling from October 2010 – July 2011.  The previous record-low precipitation for any 10-month period in Midland was 2.60 inches from October 1950 – July 1951.

The coverage of Texas rangeland and pastures in very poor to poor conditions stood at 93% on July 31, according to USDA.  The rangeland and pasture situation was nearly as bad in Oklahoma (86% very poor to poor), Arkansas (79%), and Kansas (57%).  Oklahoma’s row crops were in particularly bad shape, with USDA rating 88% of the cotton and 74% of the sorghum in very poor to poor condition.  By month’s end, topsoil moisture was reported to be 100% very short to short in Oklahoma, 97% in Texas, 89% in Arkansas, and 73% in Kansas. (US Drought Monitor)