A newly released NASA satellite image shows an ash plume drifting from Anak Krakatau (also known as Krakatoa), a volcanic island in the Sunda Strait between the islands of Java and Sumatra in Indonesia. It has been intermittently active for the past several decades.

The island exploded in 1883, killing approximately 40,000 people, although some estimates put the death toll much higher. The explosion is considered to be the loudest sound ever heard in modern history, with reports of it being heard nearly 3,000 miles (4,800 km) from its point of origin. The shock wave from the explosion was recorded on barographs around the globe. 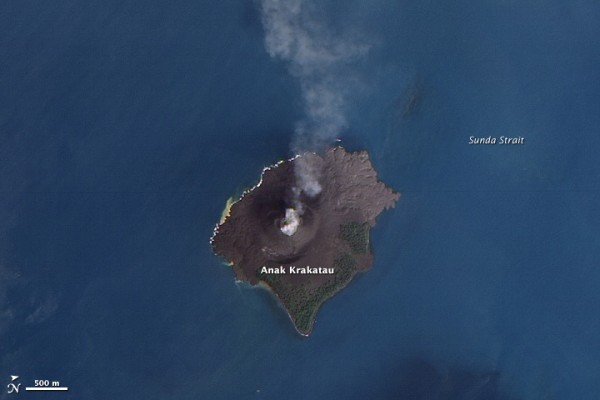 The last significant activity at the volcano occurred in January 2011 when ash was emitted more than 600 m into the air, forcing the evacuation of tens of thousands of residents. A 2km exclusion zone was also put in place for tourists and local fishermen.  The volcano also erupted on October 29, 2010 leading Indonesian authorities to issue a level 2 alert.